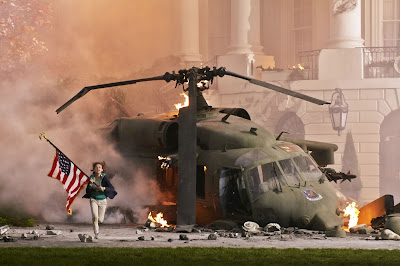 The same day I watched Roland Emmerich’s new film, news broke that Barack Obama was preparing to commit American forces in the Syrian civil war as a consequence of the Assad regime’s alleged use of chemical weapons against his own people. The sobering real-life headline somewhat popped the bubble on Emmerich’s typically frenzied adventure. In fairness to the director, whose film was planned, shot and edited a year ago or more, it was about the only occasion when grim reality intruded on White House Down: a double-denim 80s action romp disguised in the pin-stripe of a high-stakes political thriller.

As with all of Emmerich’s films, the plot synopsis could be described in pictograms on the leaflet that accompanies a piece of flat-pack furniture. The first few minutes are spent showing us which bits slot together and which direction the screws should turn. Happily for the hyper-efficient Emmerich, screenwriter James Vanderbilt’s brutalist approach gets all the dull-but-necessary story business out of the way so there’s more time for running about and blowing things up.

It’s an economical model but one with inherent problems. For instance, we first meet Channing Tatum’s aspiring Secret Service agent as he shares a dialogue scene with a squirrel, seemingly because there is no-one else around to talk to. Cale is about to drive Speaker of the House Raphelson (Richard Jenkins) to his office on Capitol Hill, as he explains to the chattering rodent, before making his way to the White House with his eleven-year-old daughter Emily (Joey King) to interview with Secret Service agent Finnerty (Maggie Gyllenhaal) for a big job.

Meanwhile, braying snippets from the television news networks explain how Foxx’s President Sawyer determination to “break the cycle of war in the Middle East” (which he blames on the “military-industrial complex”, as if that were explanation enough) has broken new ground. At a peace convention in Geneva, Sawyer initiates a complete withdrawal of American troops from the region and is photographed shaking hands with the new Iranian leader.

All this peacenik talk doesn’t play well with the folks back home. His long-serving chief of security (James Woods) is on high alert against a terrorist threat. Although still mourning the loss of his son in a war that his boss now calls futile, his job is to protect the President. He’s also just days from retirement which, in the way of these things, doesn’t bode well for his hopes of seeing the end credits. But even as Sawyer confides in his stylish and smart First Lady (Garcelle Beauvais) that his peace plan might result in him becoming “a one-term president”, a motley crew of heavily-armed right-wing mercenaries led by the Aryan-sounding Stenz (Jason Clarke) have secreted themselves in the White House.

White House Down is a far better Die Hard film than John Moore’s franchise effort from earlier this year. If his character’s name is just a few consonants away from being an actionable copyright infringement, Tatum’s divorced, unstable hero John Cale is - through violently unpredictable circumstances - soon reduced to wearing a blood-stained white sleeveless vest and a bandolier of salvaged weapons. Buddied-up with the President, Cale must keep them both alive for long enough to foil the terrorist plan and save his daughter. As events proceed, the plot thins. There’s some back-room political chicanery as the chain of command is tied in knots, a gung-ho response from the military chiefs that turns into a shambles and a series of to-the-death gun battles that result in the wanton destruction of the building’s priceless antiques and furnishings.

There isn’t much that doesn’t result in wanton destruction, actually. White House Down marks the third time Emmerich has laid waste to 1600 Pennsylvania Avenue on screen, but this is his first time to do so from the inside out. Once behind the walls, he seems to take a certain delight in blowing every iconic room into smouldering rubble and turning detailed reproductions of familiar objects into firewood: the Lincoln bed, the ‘Resolute’ desk and Stuart’s emblematic portrait of Washington are all splintered and set ablaze for our entertainment.

It’s a model of mayhem that has served Emmerich well over the years, his films make a lot of money, but White House Down is the director’s attempt to have his cake and blow it up, too. He gleefully incinerates the apparatus of the American state yet constantly reminds us of its power to effect positive change in the world. He gives us a president modelled after Obama and castigates him for being politically enfeebled at the same time as he has him pick up a machine-gun and turn Commando in Chief.

Never mind the laws of man, given the laws of physics currently at play in the universe; White House Down could not happen. Emmerich knows that. In fact, he revels in it. Part tongue-in-cheek provocation, part thunderous action extravaganza, the director gleefully expands on the lesson from television’s The West Wing: it does no harm to see impossible events played out in the familiar corridors of real-life political power. If nothing else, it serves to distract us from thinking too much about what really goes on there.
Posted by John Maguire