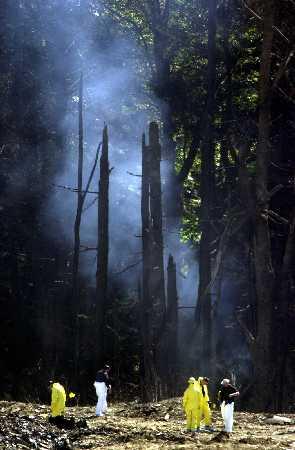 As everybody knows, on the morning of the 11th of September, 2001, four American airplanes were hijacked by al-Qaeda operatives, two of which crashed into the World Trade Centre towers in Manhattan, one into the Pentagon in Washington DC and the other into a field outside Pennsylvania. Paul Greengrass’ harrowing United 93 is the story of what happened to the last plane and is one of the films of the year.

It is a bleak experience, not to be undertaken lightly. Shot with cheap cameras in a documentary style and using the facts of the tragedy as its script, this masterfully balanced and authentic film opens amid the routine of Newark International Airport, where Flight 93 is being prepared for a flight to San Francisco. Five of the passengers are Islamic terrorists, determined to take over the plane and crash it into the White House. The film unfolds in two intertwined strands of story, what happened on the ground and what happened in the air. After establishing the terrorist’s intentions, the first half of the film depicts the gradual awareness in the air traffic control system that something is wrong, and the unpreparedness of the US Air Force chain of command. After a couple of nerve-wracking false starts, once the hijackers wrest control of the plane from the pilots, the film stays on the plane. As the frantic passengers become aware of the situation in Manhattan, a dreadful panic arrives in the film and never leaves. Although they try to take the plane back, improvising weapons and charging the cockpit, we know that this is a death ride and there is no redemption.

Much as he did in 2001’s Bloody Sunday, Greengrass sticks to the facts, allowing the film to unfold in its own horrific way without using any kind of flourish to embellish the story for drama or impact. As he did in Derry, and later in Omagh (which he produced) Greengrass worked closely with the families of the dead to ensure their loved ones were depicted honestly and fairly. The film is absolutely without sensationalism or affectation. Other than an opening fly-by of the Manhattan skyline, there is not a single shot in the film that could not come from the point of view of someone in the scene. No one event is selected as a midpoint of the drama, as modern cinema grammar dictates, and no one hero emerges. We never cut to an exterior shot of the plane falling from the sky, or see it careen from the ground. Events unfold here in real-time, which is exhausting. There is no clipped relief from the editor to bring us in and out of the action. There is no montage to spare us; we have to live it like they did.

The actors were carefully chosen from the ranks of character professionals that populate network cop shows and sit-coms. They look like us, talk like us, re-act like us. They are not drawn as heroes, they are not burdened with dramatic arcs to fulfil. There are no unthinking acts of selfless courage and no wittily scripted banter. Even the line "let's roll", taken up by the media as a banner of heroism in the days following the attacks, is delivered here as an off-camera aside. United 93 is absolutely honest in portraying the people that died on that day as ordinary people in an extraordinary situation, making the passengers gradual realisation of the dire situation facing them as convincing and affecting as if you were facing it yourself. We already know what happens, which makes the passengers desperate attempts to wrest control of the plane back from the terrorists all the more distressing. In these last scenes, Greengrass increases the movement of his cameras and the tempo of the editing to create a dreadful bedlam of noise and colour that contrasts powerfully with his previously meticulous ordering of time and place.

Although the immediate military response to the hijackings is hopelessly muddled and bureaucratic there is no attempt to moralise here. Beyond offering catharsis, Greengrass brave film offers no particular message about terrorism; the evil events speak for themselves. He similarly resists waving a patriotic flag and does not provide either a background to the terrorist’s actions or an explanation as to how the hijackings birthed the war on terror and created the shambles in Iraq.

If the film is anything, it is a memorial, a hewn-granite mausoleum of fear and futility, an eye-witness sketch of the face of death. It offers no comfort and neither should it. It is galvanising in its stark depiction of horror, unnervingly ordinary and arbitrary and empty. It only takes on meaning when viewed dispassionately as a collected sequence of events and the observer bears witness. But I’m warning you, it’s a tough job. 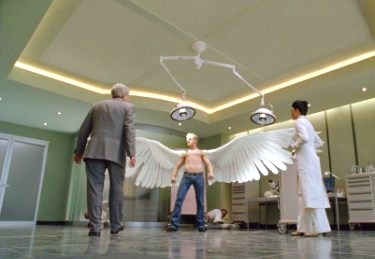 With original director Bryan Singer jumping ship to make Superman Returns, the once-noble X-Men franchise has been handed to second-tier talent Brett Ratner to ruin, and in The Last Stand, ruin it he most emphatically does. You know you’re watching a Ratner when the transfatty acids in the popcorn franchise outing don't sit well when sprinkled with the hundreds and thousands of the After The Sunset director’s failings.

Driven by millionaire industrialist Warren Worthington's (Michael Murphy) desire to 'cure' his own son, Warren Junior (Ben Foster), who has grown a fine pair of angel’s wings, a drug that reverses the X-gene mutation, the source of all the superheroes (and supervillains) powers, is developed. With the President opening clinics to allow mass vaccinations, and plenty of mutants wanting to become ‘normal’, a strained political situation spills over into war.

On one side Magneto (Ian McKellen) gathers a ragtag army of discontent cyberpunk mutants who think that destroying all non-mutants to stop the President enforcing a medical threat to their existence. On the other side, the head of the X-Men school Prof. Charles Xavier (Patrick Stewart), with the help of political animal (literally) Dr. Hank McCoy (Kelsey Grammer) search desperately for a diplomatic solution.

Then there’s the one in the middle that causes all the trouble, resurrected super-vixen Jean Grey (Famke Janssen), who returns as a fire-breathing, omnipotent angel of death, to find the third way, the pyrotechnic realpolitik of blockbuster Armageddon. Her policy of turning those who conspire to tick her off into beautifully rendered dust doesn’t deter the mutton-chopped Wolverine (Hugh Jackman), who is desperate to rekindle his love for her. Or kill her. Or maybe it’s rekindle while killing. He looks as confused about it as anybody. Nevertheless, the battle lines have been drawn more or less, and there’s a hefty chunk of special-effects budget to get through, so it all kicks off.

Ironically there’s a returning character, Rogue (Anna Paquin, just about) who cannot touch people or she’ll suck the life out of them. Ratner should have squeezed into her skin-tight costume himself. His carnival style, flashy and nausea-inducing, pushes character and story way into the background while mechanically executing enormous stunt set-ups that quickly become repetitive. When you’ve seen one magnetically-propelled station-wagon doused with flames, turning it into an impromptu weapon, you’d imagine you’d seen them all. Ratner will repeat the trick thirteen times, regardless. You get to wondering if he hadn’t finished working it all out with Dinkies and a Zippo on the carpet of his Winnebago before the knock on the door came to call him to the set.

This flashy longueur comes at just the wrong point, smack bang in the middle of the ultimate battle; the final stand-off between good and evil mutants that loyal fans have waited three long movies for. The franchise is known for its variety of characters, interlocking stories and grand themes, or rather, it was. Here we have a great start and a muddled middle that has only one place to go. When it gets there, an odd thing happens. The X-Men go out in a unique way, with a very loud, percussive whimper rather than the anticipated bang.

The new characters are given a couple of short scenes to do their various party-pieces. Trailer Park Boys fans will spot Ellen Page as Kitty, the teenager who can walk through walls with the same facility as she can steal boyfriends. Later she battles Vinnie Jones (I know, tsk) as Juggernaut, a strong-man, in a race through a long building inspired by an old Levi’s commercial. At least they get a go. Foster as Angel is anonymous, except in long-shot and mid-flight. Magneto’s new recruits, a porcupine guy and a very quick woman among them, get an introduction and a blurry fight scene and goodnight.

Whole sections of The Last Stand eluded me, being either so thinly sketched as to be subliminal, like Olivia William’s turn as a bespectacled Scottish doctor, or so lumpen that you have to crane your neck to see around them; like the deaths of major characters or the whole ‘Learn To Love The Mutant Inside” thing. The big moments arrive on cue, some more effectively used than others. We are treated to Ratner’s take on the motorway convoy pile-up, following the lead set by the Wakowski Brothers and Michael Bay before him, which is well handled without being extraordinary. Later, the fine idea of shifting the Golden Gate Bridge in San Francisco to form an impromptu passage to Alcatraz and the final battle gets mired in shabby, over-used stunt work and ho-hum special effects. More does not always mean better, but at least they’ve promised there won’t be another one.

Or have they? The studio rep at the screening urged us, the seat-flipping critical press, to wait until after the credits for an extra scene. It’ll be worth it, we were told. After staring diligently at a five minute scrawl of special-effects personnel and stunt-people, there is indeed a 'hidden' scene. It is not an apology from Stan Lee.