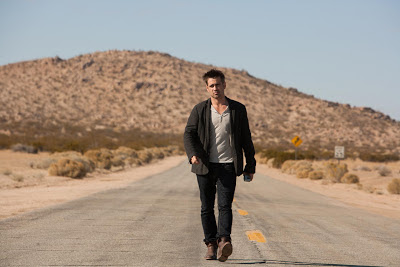 Irish writer and director Martin McDonagh has gone Hollywood. He’s gone to Hollywood and made a Hollywood film, about people living and working and dying and not working in Hollywood. Seven Psychopaths is a gory black comedy which works as a both a satire on, and an example of, hardboiled gangster cinema. Closely connected in spirit and execution to the surreal knottiness of Charlie Kaufmann and the vivid Grand Guignol theatrics of Quentin Tarantino, McDonagh’s follow-up to In Bruges operates on the verge of absurdity throughout, being defiantly self-aware, self-referential and completely and utterly clever-clogs.

All of this is nothing new for McDonagh, whose characters, even in his acclaimed stage plays, have always shared the quality that Tarantino calls “movieness”; the awareness that they are characters and that the world they inhabit is make-believe. For In Bruges, McDonagh placed two stock characters, a bickering pair of killers-for-hire, in a situation that not only allowed him to explore how their glamorised cinema universe bumped up against the grey, everyday world of dusty museums and shuffling tourists, but to slowly absorb into their orbit other characters from a film-within-the-film, a ferocious dwarf actor and an art department love-interest. McDonagh mocked his assassin’s appetite for violence while indulging in it, a neat trick that he executes again, albeit without the same levels of subtlety and wit. It is Hollywood, after all.

Colin Farrell, who co-starred in In Bruges, plays Martin, an ex-pat Irish screenwriter working in Hollywood. Martin seems to enjoy his new life in Los Angles; the comfortable domesticity he shares with his girlfriend Kaya (Abbie Cornish, briefly) and sipping cocktails with his live-wire best friend Billy (Sam Rockwell) beside sun-kissed, rooftop swimming pools. The trouble is that Martin has forgotten how to write. Terminally blocked, and with his agent pressing him for delivery of a long-promised screenplay, all he has to show for a year’s work is a title: Seven Psychopaths. Everyone loves the title, it’s a great title, but Martin is unable to progress his story any further than EXT: LOS ANGELES STREET CORNER, DAY.

Martin is beginning to despair that he will never be able to place two words together again when his peripatetic life starts feeding him inspiration. The newspapers are filled with stories about a masked killer who only kills mobsters, leaving a playing card on their bleeding corpses. There’s a character in that, Martin thinks, but the Jack of Diamonds killer is only one psycho: he needs six more. When Billy places a recruitment ad in the paper looking for psychopaths to get in touch, they meet a rabbit-stroking tramp (played by Tom Waits) who describes, in eye-watering detail, those events that drove him to become a killer. Billy, whose career as an actor has hit the skids, tells Martin about another potential character, his colleague in a dog-kidnapping business Hans (Christopher Walken), who has recently taken illegal possession of a yappy Shih Tzu belonging to Charlie, a notoriously ruthless mob boss played by Woody Harrelson. What’s the count on psychopaths now? Four, maybe five? A side-story introduces us to a Vietnamese priest (Long Nguyen), sitting in a motel room plotting revenge on America for the Vietnam War while, somewhere in the city, Harry Dean Stanton stalks the streets in a wide-brimmed hat as a vengeful Quaker tormenting the man who killed his only daughter. There’s really not a lot to be gained in keeping up with the various shades of human psychopathology on display, the film is more about following the looping convolutions of the plot, and perhaps it’s not even about that.

Just as the fictional Martin becomes distracted by the unhinged characters that he meets, the real-life Martin allows this otherwise workaday buddy crime caper to break free from the conventions of cinematic narrative and fold in on itself, becoming a reflexive meta-textual commentary on screen violence, storytelling and Los Angeles itself. For instance, Rockwell’s excitable Bickle demonstrates what should happen next at a key juncture in Farrell’s screenplay, proposing an action set-piece which gathers everybody in a cemetery to shoot off big guns and splash around in fake blood; a crude, dumb shoot-out that we then watch being acted out, in all its high-concept glory. When the story takes a long detour into talkativeness, Bickle is again on hand to observe, “oh, we’re making French movies now?” Elsewhere Walken’s grizzled Hans tells Martin, truthfully, “your women characters are awful”, as Cornish and Precious star Gabourey Sidibe come and go in a couple of frames.

But if McDonagh can see where his screenplay needs work, why not do the work rather than leave it to the characters point out the problems and carry on with a smirk? That’s not to say that the results aren’t entertaining, the dialogue fairly fizzes and the multiple storylines are enjoyably contorted, but it is difficult to remain involved in a film when the characters are going out of their way to remind the audience that they are watching a film. There’s no time during Seven Psychopaths to think how neatly McDonagh’s story fits together, if it fits together at all, and afterwards the film doesn’t linger long enough in the memory to bother trying.
Posted by John Maguire No comments:
Newer Posts Older Posts Home
Subscribe to: Posts (Atom)