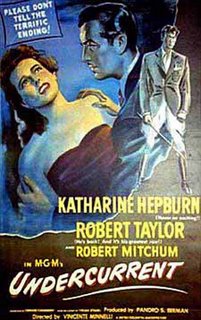 FIPRESCI, the international federation of film critics, has just launched Undercurrent a new magazine "for reflection on films, on the cinema and on film criticism".
The first issue has an interview with sound designer Leslie Shatz, a bizzare attempt at critical restoration for Cameron Crowe's insipid, botched Elizabethtown and the transcript of a very interesting discussion group at the Brisbane Film Festival about how critics work.
Very interesting, for me, at least. They also have an open call for essays and articles.
Posted by John Maguire 2 comments: 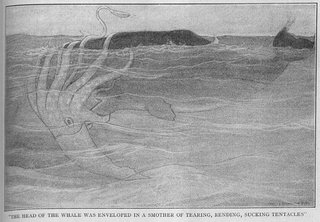 For a jaded critic, blinking from the onslaught of dismemberment fantasies and twee children's animations clogging the arteries of the nation's multiplexes, Noah Baumbach's scorching semi-autobiographical divorce comedy/drama The Squid and the Whale offers immediate relief, a cinematic balm that provides both excitement and gratification in equal doses. Of all the many good reasons to turn off your computer right now and go see it, the best is the central performance of Jeff Daniels as a self-absorbed, full-of-it, middle-aged father. I’m not sure which beast he represents but Bernard (pronounced in the American fashion with a flat, nasal A) is such a fantastic movie character and Daniels gives such a faultless acting display that the only proper response has to be; who knew he had it in him? So long relegated to second string anonymity and being confused, in my mind at least, with Jeff Bridges, this is Daniel’s finest hour since The Purple Rose of Cairo twenty years ago. I might have put Dumb & Dumber (which was only ten years ago) because there too Daniels is outstanding but more because in his head, Bernard thinks he is Woody Allen’s suave matinee idol, Tom Baxter. But in reality this man is a slightly better read, more opinionated version of the Farrelly Brother's heavy-lipped simpleton, Harry Dunne. A failed novelist who hasn’t published anything for years, Bernaaaard is unhappily married to Joan (Laura Linney), his second wife and a woman of enormous patience, not least on the tennis court. They have two teenage sons, a well-appointed house and a cat and are busy living the 1980s Reaganomic dream of nikes and volvos, tennis and neighbourhoods, self-absorbtion and self-interest.

Bernard is closely based on the directors own father, the novelist and teacher Jonathan Baumbach. I would love to know if he has seen the film, and what he thinks of it, because his son sees him as a relentless attention whore, constantly seeking affirmation and consolation and bewildered by the turns his life has taken. He is consumed by this need for control, so much so that he cannot see anything else; his failing career and its various improprieties, his remote, fractured wife and children. He can’t hear his own droning voice or read his hackneyed writing. It’s more than a writer’s vanity; it’s a complete oblivion, a selfish retreat into the mind and the minor glories of a long-gone past.he only thing that shakes him out of his stupor is the threat to his standing in the family and his rampant ego that Joan’s new career as a writer represents. In one glorious incident, the great teacher asks if she had followed his advice on some notes on a piece of her prose. She tells him she didn’t make the changes and liked it better her way and he visibly winces, for her benefit, in sympathy. We get to see precisely how patronising Bernard has become (because she wouldn't have married him if he was always like this), is highlighted when he drives, with his eager son and his starry-eyed girlfriend to give a reading to a half-empty hall in a small college, from a book printed before most of the audience were born. Soon after, Joan's story is published in the New Yorker.

With the balance of power shifted, and the ground gone from beneath his feet, Bernard’s response is total collapse. He moves from the family home to a crumbling shack, starts an awkward affair with one of his students (a spot-on Anna Paquin) who writes lengthy short stories about her vagina and causes consternation over the timetable the new, doubled-up households bring about. While Try and make the divorce as hard as is possible on everybody. Like I said at the outset, he’s a brilliant movie character, annoyingly dense and boorish but charming and funny too. The family split, it falls on the two sons to try and salvage their lives from the wreckage the adults leave behind. The older of the two, Walt (Jesse Eisenberg), sides initially with the father, spouting his tired old opinions and affecting his scholarly air of detachment. The younger, Frank, takes to drinking beer and acting out. As Bernard letches over his nubile Lolita, Joan starts an equally inappropriate affair with the boy’s tennis coach (played by William Baldwin) and everything starts to unravel.

Baumbach is publicly cleaning out some old closets here, but with tremendous charm and honesty, he doesn't stop his caustic eye from falling over his own teenage self. His character, Walt, is a loathsome, mouthy creep; anxious and uncomfortable, pretentious and ill-informed. Your typical teenager, maybe but he claims Pink Floyd lyrics as his own and worse, treats everybody terribly, exactly as his father has repeatedly shown him to do. There is no doubt that Baumbach has seen the error of his ways, and knows just what a monster he was. Making the process of telling an autobiographical coming-of-age story itself part of the process of growing up and learning to deal with it all is, casting aside, his master stroke. In the end, Baumbach is merciless. Everyone gets caught out and everything is forensically exposed; Bernard as a fool and a bastard, Joan as an adultress and a flake, Walt as a plagiarist and a bastard-in-training. The compulsive onanist Frank’s fate is more delicate, but they are all, in Baumbach's hilarious, probing way, gently cleft open.

From the roots of inadequacy sown by a man losing his potency and flailing to recover it, The Squid & The Whale makes a compelling, hilarious and ocassionally poigniant case for a cold, hard truth, people are awful, especially when they love each other. The image of the two tangled beasts, which closes the film, is taken from the NY Museum of Natural History’s famous, atrium-filling exhibition, but the taxidermy frozen in three dimensions to represent a struggle to the death is a stiffer, starker, and ultimately more straightforward thing than the nuanced, occasionally hilarious emotional battle that we have just witnessed. It obviously struck a chord with Baumbach, whatever its deeper emotional significance. We should be very glad it did. 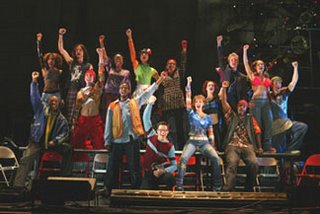 First off, full disclosure. I despise musicals in every form and if it weren’t for their occasional return to popular cinema, would never watch one. It’s not the sudden segues into song or the way whole streets of passers-by burst into well-choreographed jazz-hands that gets me. It’s the overwhelming fakeness and insincerity of the genre that I cannot abide; all the Up With People! plastic smiles, the cheesy show tunes and the cardboard backdrops. That ingrained antipathy is not entirely this movies fault, but I can't remember being so unhappy when watching a film (and so desperate to leave) so Chris Columbus’ will-sapping, fairy-story song and dance effort has to shoulder some of the blame.

Directed as if it were on stage, but without the live audience that adds frisson to all that prancing about, Columbus brings the Broadway hit about dodging landlords to the big screen, without ever offering any reason for his having done so. Rent aspires to be an up-tempo movie about AIDS, heroin addiction, sex-workers, drugs, transvestism and bisexuality, bravely tackling such difficult themes by surgically removing any lingering trace of authenticity, danger or truth in order to keep everybody smiling through all the tears.

Inspired, it says here, by Puccini's La Boheme, the film follows a year in the life of the dues-dodging roommates Roger and Mark, a filmmaker (glasses, 16mm camera) and a struggling musician (big Bon Jovi hair, shouts everything) who along with their close-knit group of squatter friends, including Rosario Dawson as Mimi the hooker with the heart of gold, struggle to cope with the difficult life outlined above by fighting authority and remaining true to their bohemian selves. Roger and Mark did have a third roommate, Benjamin (Taye Diggs), but he married a millionaire’s daughter and has now become a property developer and their landlord.

Sound contrived? You bet it does. The soap-opera Rent is clad in rags it tore up itself. In keeping with the early-90s AIDS theme, there’s a lyric about a low T-cell count. I defy you to listen to it without your face scrunching into a wince of agony, your fingernails gripping the cinema seat in a spasm of pure torture. Do you think people dying of AIDS look this pretty, sing and dance this sweetly, hope for the future this blindly? Think on.

Manfully struggling to put my own critical prejudices to one side, I still ended up hating every single frame of this misbegotten film. The songs are awful, the acting performances likewise. The dialogue is laughable, mere shreds of chat stitching the songs together. The staging looks exactly that, staged, flat and bare and empty. When the freezing roommates make a fire with their abandoned screenplays and art brut, for a moment I dreamt that the reels of celluloid had followed them into the flames. I awoke again and the film was still playing and the rent was still due and my stomach was a hot knot of nausea, as if I had been force-fed candyfloss spun from broken bottles.