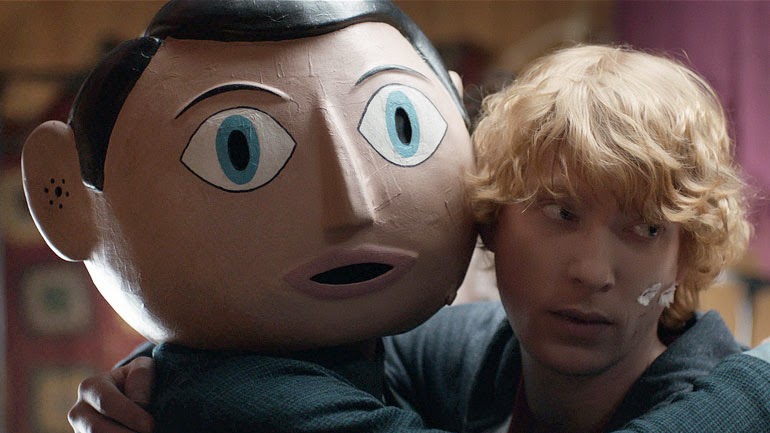 “I say tell everyone everything. I mean, why cover anything up?” The man speaking this line is wearing a papier-mâché head with wide-set painted blue eyes and bee-stung lips. His name is Frank and he’s a singer in a band. The head doesn’t come off. It’s therapeutic. Frank has a certificate.

In the first of director Lenny Abrahamson’s wilful ironies, the man in the head is played by one of the current cinema’s most handsome leading men, Michael Fassbender. He’s explaining his song-writing philosophy to Jon (Domhnall Gleeson), a keyboard-player and wannabe rock star who has just joined his unpronounceable band Soronprfbs. And Jon doesn’t get it. The band is holed up in a cabin in the Wicklow Mountains, supposedly recording an album. They’ve been there for a year, having gotten lost on the way to superstardom, a place nobody but Jon wants to go.

That’s the set-up for Abrahamson’s off-beat musical comedy Frank which shares something with the director’s previous films in that the story contains a nugget of truth. There really was a rock singer named Frank Sidebottom who wore a papier-mâché head and he was joined, for a brief period, by a keyboard player who wanted to be famous, the writer Jon Ronson, who scripted this story with Peter Straughan. From that kernel of inspiration, Abrahamson has constructed a funny, tender and endearingly daft film that captures the spirit of creativity like lightning in a bottle then tries to break the bottle over your head.

We first meet Gleeson’s Jon as he is enlisted into Soronprfbs to play a gig when their other keyboardist runs screaming into the sea. The previous incumbent had been driven to his demented soaking by the rest of the band, including Theremin-playing Clara (a brilliantly sour and suspicious Maggie Gyllenhaal), aloof bassist Baraque (François Civil), passive-aggressive drummer Nana (Carla Azar from the band Autolux) and manager Don (Scoot McNairy). The gig does not go well but Jon joins up anyway, taking the ferry to Ireland under the pretence of another live date. “You can play C, F and G, right?” asks Don, with a squint. They end up trekking into the mountains to record a long-promised album, rehearsing in a close-quartered cabin and finding inspiration in the wild world around them. Tweeting his experiences incessantly, and slowly gathering followers, Jon secures the band a slot at the prestigious SXSW festival in Texas and Soronprfbs reluctantly hit the road. And like every road trip ever undertaken by a ragtag gang of movie characters it turns out to be their undoing.

Frank wouldn’t work if the music didn’t work. From under the head, Fassbender proves a magnetic front-man, delivering a masterclass in physical performance through little more than undiluted charisma. As we watch Frank lead the band through their unconventional rehearsals, or weaving around on-stage, the music from composer Stephen Rennicks takes an identifiable shape. Songs are delivered in burps and snatches as Soronprfbs generate a sound unique to themselves but inspired by outlying musicians like Captain Beefheart, Daniel Johnson and The Residents.

Abrahamson’s uncanny control of tone and mood nudges Frank from a kind-of comedy to a kind-of tragedy, bumping up against almost every point in between. Partly an exploration of the unknowable methods of the truly creative, and partly a discussion about how fame and celebrity are cheap commodities in the internet age, Frank is a consistent and enduring delight. It’s a film about outsiders who feel no particular urge to come inside. An unexpectedly poignant conclusion makes astute observations about how analysing the creative process can destroy it, and damage the source of creativity itself.
Posted by John Maguire No comments:
Newer Posts Older Posts Home
Subscribe to: Posts (Atom)