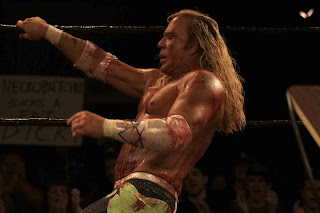 For months the talk has been about how The Wrestler has resurrected the career of Mickey Rourke. The faded former star has won plaudits and awards for his performance as Randy Robinson in Darren Aronofsky’s unassuming epic about a washed-up wrestler looking for one last day of glory. Rourke, once the poster boy for celebrity casualty, is the hot tip for the Best Actor Oscar next month.

But the film is a comeback of sorts for the director too. Aronofsky’s early films; the paranoid freak-out Pi and drug-opera Requiem For A Dream, labelled him as a daring visionary, a conceptual genius with a hyperkinetic eye. The abject failure of his third film The Fountain, which had a big budget and even bigger ideas, caused his career to stall. The Wrestler restores his reputation as one of the best American directors working today.

We first meet Randy “The Ram” Robinson as he sits slumped in a chair in a corner of a room. His back is to the camera, his shoulders heaving. It’s an archetypal sports-movie shot, a still moment of exhaustion after superhuman effort. Then, we realise the chair Randy is perched on is far too small for his meaty frame. There are finger paintings on the wall. It’s a kindergarten, co-opted as a changing room for a small-time wrestling exhibition in the next-door school gym.

Randy was a big star once, but that once was twenty years ago. He was a big draw in the professional wrestling game, an American hero in a peculiarly American sport, grappling the bad guys in choreographed, pre-ordained bouts on television every weekend. He made some money but he lost it all to a divorce and, the film hints, drugs and booze. Now, well past his prime, Randy is still pounding the canvas in gyms and halls on the amateur circuit, punishing his body for a cut of the takings on the door.

In between these increasingly bloody and prolonged matches, Aronofsky delivers a straight edged, emotionally complicated drama about loss and redemption. The director reins in his more elaborate visual tendencies, allowing the actors, not the camera or the editing, to communicate emotion. The same realism extends to the concrete halls, trailer parks and windblown New Jersey streets that Aronofsky employs as a backdrop. These are half-forgotten places, as run-down and obsolete as the characters.

After an incident that lands him in the hospital, Randy looks to reconcile with his estranged daughter, Stephanie (Evan Rachel Wood). She has grown up without him and hates him for it. When the girl rebuffs his clumsy attempts at a reunion, Randy asks his only friend, a stripper named Cassidy (Marisa Tomei), to help him make a connection. She is a thirty-something mother of one, who like Randy, keeps doing what she has always done because she doesn’t know what else to do. They are both performers, experts at faking something the viewer wants to believe is real; sex and violence. The Wrestler is about what happens when the audience stop responding.

Then, a chink of light. Randy is offered a lucrative rematch against an old foe at a big-time reunion tour. He puts in extra hours at his supermarket job to pay for the steroids, fake tan and hair dye he uses to look his best but it might be one fight too much for his failing body.

The Wrestler is a poignant and perceptive film with an extraordinary central performance from Rourke; tender and tough, quiet and full of rage. Randy is a once-in-a-lifetime role for the actor and he knows it. Under Aronofsky’s unobtrusive direction, Rourke rediscovers the force and nervy charm that made him a star in the first place. The result is a masterful assembly of hundreds of tiny moments of authentic expression that combine into something unforgettable.

Spring hasn’t yet sprung but in The Wrestler and Danny Boyle’s Slumdog Millionaire, we might have already seen the best films of 2009.
Posted by John Maguire 4 comments: 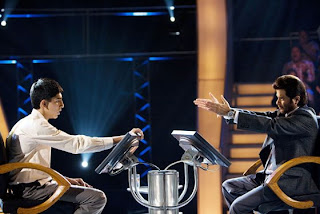 British director Danny Boyle continues his one-man trawl through cinema genres with the extraordinary Slumdog Millionaire, a beautiful, bittersweet Bollywood take on Dicken’s Oliver Twist.
Adapted by Simon Beaufoy from Vikas Swarup’s novel, Boyle brings his eye-catching visual style and tight narrative hold to the sweeping story of Jamal Malik (Dev Patel), an 18 year-old call-centre worker from the slums of Mumbai who is about to win the top prize on India’s version of the TV game show “Who Wants To Be A Millionaire?” Just as Jamal is about to hear the final question, the buzzer sounds and the show stops filming for the night. As he leaves the studio, Jamal is arrested by the police and taken to the station to answer even more difficult inquiries from the suspicious chief inspector (Iffran Khan). How could a semi-literate young man from the slums know more than lawyers or schoolteachers? Jamal must be cheating.

The police review the questions he has been asked on the quiz show, and, one by one, Jamal explains how he happened to know each answer. With a simplicity that belies his complicated visual technique, Boyle structures the story so that each time Jamal explains his knowledge of trivia, we get an extended flashback into his life, starting with his childhood in the slum where he and his brother grew up. We see Jamal’s first meeting with Latika (Freida Pinto), who turns out to be the love of his life, and their subsequent capture by a Fagin-like beggar king. After this beautifully acted and photographed sequence, the story switches to the brother's teenage adventures on India's train network, including a funny spell as ad hoc tour guides for dumb white people at the Taj Mahal.

Slumdog Millionaire is a crowd pleaser that takes an old-fashioned story and turns it into something new and exciting, thanks mostly to the quality of the writing, the tremendous performances of the entire cast and Boyle’s uniquely vibrant and arresting direction. Borne along by the momentum of the biography and the tension of the quiz show, Boyle’s film starts astonishingly well and keeps getting better.

There are minor problems, an incongruous gun appears in the third act and there's a noticeable disconnect between the adult players involved in the romance, but Boyle's film more than makes up for these occasional bumps to become something deft and bold, a dazzling film determined to entertain and enthral. The closing credits are topped with a glorious song and dance number, in the Bollywood tradition, that reunites all the players and will send you home with a smile on your face.
Posted by John Maguire 2 comments: 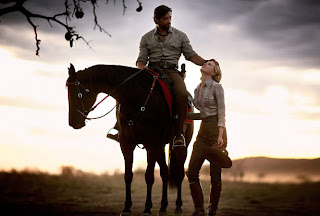 Baz Luhrmann has set out to make a big film for a big country but Australia is a preposterous shambles. The horribly over-extended running time of two hours and forty-five minutes is nothing compared to the lacklustre story, the deadening dialogue and paper-thin characterisation.

The first forty minutes of this self-aggrandised epic are startlingly theatrical, detailing the arrival of snooty Englishwoman Lady Sarah Ashley (Nicole Kidman) to the dusty town of Darwin on the continent’s northern coast in 1939. She has come to find her husband, who has spent years on the family’s ranch, Faraway Downs. All received pronunciation and buttoned-down propriety, Kidman’s bubble of aristocratic nobility is punctured when she meets her chaperone, a rugged farm hand known only as The Drover (played by Hugh Jackman).

On arrival at the dilapidated outpost, Lady Sarah discovers her husband has been killed in mysterious circumstances. He was speared in the back while crossing a billabong. The local police have placed the blame on an aboriginal elder called King George (David Gulpilil) and set out to comb the territory to capture him. However, King George’s grandson Nullah (Brandon Walters) lives at Faraway Downs and when his mother is killed accidentally, Lady Sarah makes plans to adopt him. But the authorities disapprove and want to take Nullah to a remote camp for children born of aboriginal and white parents.

Rather than sell her failing farm to the local cattle baron King Carney (Bryan Brown), the plucky Lady Sarah decides to stay and make a go of it, a decision made in part by a scene where Jackman takes a shower in front of her. Will he liberate the passionate woman trapped beneath the layers of London petticoats? Will she turn the rough-handed free spirit into a caring and compassionate man? Once Luhrmann gets past the camp cartoon introductions, the answer to either question is never in doubt.

Following the standard set in Gone With The Wind, which the film desires to remake as pastiche, Lurhmann fills the remainder of his running time with huge, flat set pieces, painful partings, joyous reunions and snatches of The Wizard of Oz and Pearl Harbour.

Nullah and his grandfather share a mystical telepathy that comes in handy when the plot starts to sag. We see a lot of this mystical nonsense, which has no foundation in Aboriginal culture, because there are long stretches where the film seems to come to a dead stop. Then, joyously, the war starts and the Japanese arrive in a cloud of aeroplanes and blow everything to pieces.

Australia looks handsome enough on the surface. The action is scored with a stir of weeping cellos. Our nameless, shirtless hero clenches his jaw while the heroine swoons and schemes. The landscape of flat-topped mountains ringing a vast red valley photographs beautifully. But over time the film reveals itself as a hideously camp parade of Mills & Boon storytelling uncomfortably lumped together with a DVD shelf full of finger-pointing movie references.

For all its sense of ironic theatre and likeable bravado, Australia has far too many flaws to recommend. In remaking the origins of his home nation as a Technicolor fable, Luhrmann shows the best of good intentions but this spirit is not matched by the execution, which is awkward and cloying. His tone lurches drunkenly from farce to melodrama and back again. Kidman or Jackman are simply unable to keep up. The best performance comes from the ten year old Walters as the young aboriginal child, who also narrates the story. He has a bright, open face and a quick smile, in comparison to Kidman’s immobile expression. All she can muster nowadays is a pinched, lemony pout.
Posted by John Maguire 1 comment:
Newer Posts Older Posts Home
Subscribe to: Posts (Atom)