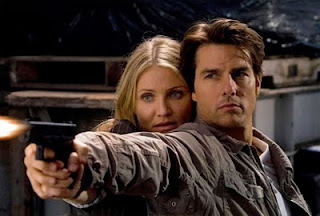 Tom Cruise plays up to his reputation as a motor-mouth maniac in James Mangold’s Knight and Day, an intermittently distracting summer-season action-comedy-romance that crosses Jason Bourne with Jason Byrne.
Cruise plays Roy Miller, a highly-trained killing machine gone rogue from a secret government agency. We first meet Roy (as we first met Cruise’s other seemingly omnipotent killer Vincent in Collateral) as he walks through an airport. Roy is looking for a stooge to unwittingly carry something through security and finds her in Cameron Diaz’s June, a nervous car-mechanic. The switch made, the two get on their flight together, where Roy dazzles June with his teeth while she bats her eyelashes like a camel struggling through a sand storm. One unconvincingly-realised plane crash later, the two desperados are on the run. The rest of the plot, such as it is, circles around a manhunt for science-prodigy Simon Feck (Paul Dano), who has invented a super-strength battery that never runs out of juice. A nefarious Spanish weapons-dealer is desperate to get his hands on it, and has recruited someone crooked within the CIA to obtain it for him. The only thing standing in his way, and the musically named Mr Feck’s only hope, is the super-confident super-agent.

Since the day he jumped on Oprah’s couch in 2005, Cruise has watched his star plummet. No longer a sure-fire box office draw, his last four films have been critical and commercial disappointments; the superfluous Mission Impossible III, the po-faced Lions For Lambs and the officious Nazi drama Valkyrie all flopped. Knight And Day isn’t the film that will return Cruise to the top of the pile, but it is undoubtedly better scripted and more fun than anything we’ve seen from him lately. He gives an astute, energetic performance, fuelled at least in part by a degree of self-mockery, playing up to the public perception of him as an excitable, indefatigably positive weirdo. Like her co-star, Cameron Diaz badly needs a hit. There’s Something About Mary was a long time ago, but the actress is essentially playing the same part; a skittishly lovely foil for a floundering chatterbox, although this time she gets to shoot off a few guns.

The film’s greatest weakness is that once you get the joke, you get the joke. The perpetual-energy battery isn’t powerful enough to maintain momentum in the story, which comes to a standstill about half way through leaving the stars with nowhere to turn. The movie keeps going - and going - zipping from anonymous American cityscapes to snow-tipped Salzburg, via a sojourn in the Azores and a well-realised car-chase during a bull-run through a Spanish street. But all this mayhem-raising globe-trotting is for nothing; the lavish backdrops only highlight the paucity of what is happening up front. The chirpy banter between Cruise and Diaz is fun, for a while, but like the screen-filling pyrotechnics, the cacophonous shoot-outs and the blindingly obvious villainy, the thrill fades sooner than it should.
Posted by John Maguire No comments: 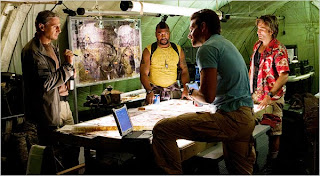 Nostalgia ain’t what it used to be. In fact, it’s not even close. The latest 1980s pop-culture totems to be whittled down into kindling and fed to Hollywood’s ever-hungry furnaces are the chopsocky empowerment tale The Karate Kid (not reviewed here) and the action comedy television series The A-Team. Now, nobody is claiming that either film or tv show represent the pinnacle of 1980s cultural achievement but they were nevertheless phenomenally successful; the Karate Kid spawning three sequels, and countless childhood tooth-chips, while the five seasons of the A-Team are still shown at the outer reaches of cable television worldwide.

Audience familiarity is director Joe Carnahan’s most immediate advantage in his beefed-up version of The A-Team but even this rose-tinted remembering is soon exhausted in a ponderously complicated action adventure. Anyone who spent their twelve year-old Saturday evenings sitting too close to the television will recognise these characters: leader Hannibal Smith (Liam Neeson) still loves it when plans come together; his first lieutenant Face (Bradley Cooper) still flirts with the ladies, getaway driver BA Baracus (Quinton Jackson) still pities fools while helicopter pilot Murdock (Sharlto Copley) is still nuts. The first part of The A-Team is concerned with establishing how the four came together, and how they became military outlaws – in other words, extending the story told in the television series memorably narrated, minute-long opening credits to about an hour.

After a twenty minute pre-credits introduction, a blur of bullets and bluster, the action switches to the US war in Iraq and a mission to stop a billion dollar counterfeiting scam organised by henchmen loyal to Saddam. The A-Team are called in by army specialist Charissa Sosa (Jessica Biel) to find the crooks, who are also being trailed by the CIA (represented by the vulpine Patrick Wilson) and a secret division of privately hired mercenaries. When the plan goes awry, the team are accused of theft and must flee before regrouping to solve the mystery and clear their names.

And that’s about it for character and story. The rest of The A-Team is given over to elaborate set-pieces, third-degree pyrotechnics and robotic digital effects. “Overkill is underrated” Hannibal says, at one point, but not from where I’m sitting. Fireballs aside, Carnahan’s biggest innovation is to cross-cut between the team planning their various gunfights and getaways and said gunfight or getaway being carried out. This device, while fun at first, like the rest of the film soon tires. The film’s camp humour offers some meagre compensation, with much being made of the behemoth BA’s reluctance to get on a plane and a decent visual joke at the expense of the new 3D format. But for a script that has been in development for a decade, and has five credited screenwriters, we might have expected a little more. It all adds up to two hours of dangerous scrapes and daring escapes. Not too shabby, if you’re twelve.
Posted by John Maguire 3 comments: 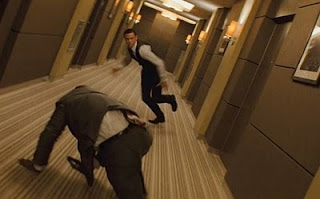 Christopher Nolan’s follow up to the blockbuster success of The Dark Knight is not a franchise installment, a remake or a re-imagining. Inception is an original screenplay, Nolan’s first since Memento, packed with complex ideas and mind-bending storytelling, that doesn’t fit easily into any summer-friendly genre. And it’s in fabulous, glorious 2D.

For a film in which the characters spend most of their time asleep, Inception doesn’t rest for a minute. The film opens, without preamble, as Dom Cobb (Leonardo DiCaprio) attempts to steal top secret information from the sleeping mind of Saito (Ken Watanabe), a wealthy Japanese businessman who is in fact testing Cobb for a far bigger job. The new target is Saito’s nearest rival Robert Fischer Jr. (Cillian Murphy), the heir to an industrial fortune. This time, however, the mission is not to steal an idea, but to implant one. With the alien thought buried in his subconscious, the thinking goes, Fischer will dissolve his late father’s companies and clear the way for Saito’s monopoly. But the thinking goes far deeper than that.

Cobb’s closest ally is Arthur (Joseph Gordon-Levitt), a fixer who looks after the technology, and keeps an eye on the watch. For the big job, Cobb calls up new recruits; English dandy Eames (Tom Hardy) can impersonate other people in the dream-world and Yusuf (Dileep Rao) can make a sedative that can keep the target dreaming. The last piece of the puzzle requires a specialist, so Cobb recruits psychologist Ariadne (Ellen Page) and teaches her how to mentally construct every street, building and room in the artificial world. More importantly, the newcomer serves as a sounding-board for Cobb to explain exactly how the trick, and by extension the film, works.

In short, and without spoiling the fun, when the subject is dreaming, Cobb uses his technology to draw them into another dream, where he can create yet another dream world, and so on. The genius of his invention is that time works differently, the deeper into the dream you do. A minute in the real world becomes ten minutes in the dream and, perhaps, a day in the dream within a dream. Below that, where Cobb and his team are preparing to go, time stretches on into years, maybe decades. This multi-layered set-up allows Nolan to keep three different clocks ticking at three different speeds, a device that works to heighten the tension three-fold as he cuts back and forth between worlds, between characters and between the real and the unreal.

It’s brain-freezing stuff, and like the spinning top that serves as a key plot device, Inception is always on the verge of falling over. That it never does is Nolan’s great achievement, but he didn’t arrive at it by chance. Inception is constructed like a maze, with the director acting as navigator, providing all the information required to comprehend what is going on at any given point, without ever giving the game away.

Impeccably conceived and photographed, Inception has a series of stand-out effects sequences; a Parisian street folding in on itself like a book and a dizzying zero-gravity getaway. The plausible sci-fi noir mood is the same as that found in the best work of writer Phillip K Dick, with Nolan broadening his range to pay homage to his inspirations. There’s a room that recalls Kubrick’s 2001 and a mirror effect taken from the similarly convoluted Lady From Shanghai, but also sequences that could have been taken from On Her Majesty’s Secret Service and explicit visual nods to the impossible realities of artists Rene Magritte and M.C. Escher. If his references are intended to further identify Inception as a metaphysical puzzle, the film is a metaphorical one, too as Nolan shares Cobb’s ability to weave dreams, plant ideas and mess with our heads.
Posted by John Maguire No comments:
Newer Posts Older Posts Home
Subscribe to: Posts (Atom)