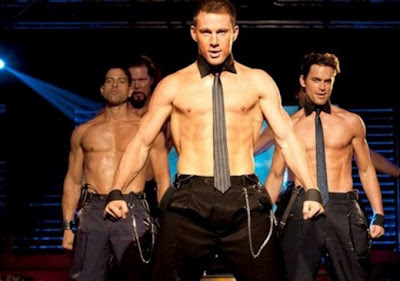 In 2010 American director Steven Soderbergh declared he was about to retire from filmmaking. Since then, he has released three films in cinemas; low-budget, naturalistic examinations of shadowy, unseen worlds. There was the panic-stricken epidemic thriller Contagion, which brought us inside the laboratory as a virus threatens to end the world, the clandestine arena of international espionage in Haywire and now a peek behind the glittering curtain of male strippers in the funny, enjoyable Magic Mike, a film about money.

Based on star Channing Tatum’s experiences as an 18 year old exotic dancer in a Florida nightclub, Magic Mike opens with the now almost 30 year old as he wakes up, surrounded by women, in his Tampa home. An entrepreneurial spirit, Mike juggles a day job as a building contractor and a sideline in custom furniture manufacture with being the main attraction at a small-time, beach-side strip club called Xquisite. The club’s owner Dallas (Matthew McConaughey) has taken the young man under his wing, promoting him as the club’s main attraction, dressing him in overalls and hoodies as a blue-collar working stiff, to the whooping delight of his female clientele. Mike is a big star and makes big money. Dallas has plans to make him even bigger, moving the club to a bigger site in Miami where four thousand women will be given the chance to stuff his g-strings with sweaty dollar bills every night.

Having been mentored himself, Mike in turn acts as protector to Adam (Alex Pettyfer), a broke and desperate youngster he meets on a building site. He takes him out to the nightclubs and instructs him in the art of hustling customers for the strip-club, before a series of comical accidents lead the 19 year old to make his stripping debut. Adam’s sister Brooke (Cody Horn), a level-headed nurse, is not convinced that the change in direction is the best thing for the naïve teenager, but she trusts Mike when he says he will look after him. Soon, the club’s newest act has fans of his own and the summer season stretches before them filled with easy money, all-night parties and endless girls, set to a shrill, synthetic soundtrack.

Soderbergh does his best to balance the squeal-friendly dance routines with narrative substance, as the young men become involved in some unsavoury business dealings with dangerous people, but the off-stage story struggles to catch a spark. Magic Mike only truly takes off when focusing on the baby-oil skin and ritualized bumps and grinds of its muscled protagonists, with Soderbergh gradually revealing the repetitive, soul-destroying nature of the performances, where the men willingly trade their sexuality for crumpled cash. A scene where Tatum sits in his living room, ironing out the wads of currency and weighing them down with a book is balanced later by a moment where McConaughey lies supine on the stage and his audience shower him with bills.

Tatum, best known as an almost-silent presence in a series of dull action films, reveals an unsuspected depth as the titular hunk, gradually realising that his time as a stripper is running out and he has no back-up plan. But it’s McConaughey who steals the show as the heavily-varnished Dallas, throwing himself into the role with a cocky swagger with more than a hint of self-parody. Bound to find an appreciative audience among the hen-party set, Magic Mike is more than just a parade of bulging beefcake, but a witty, moral story about cold hard cash and commodified sex. The only trick Soderbergh misses is not presenting the film in 3D.
Posted by John Maguire