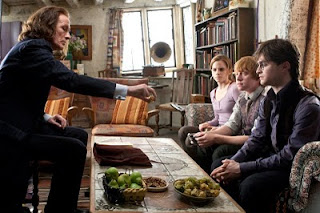 Harry Potter is heading off. The first in a double bill of farewells, The Deathly Hallows Part 1, is a passable thumb-twiddler for impatient fans but the beginning of the end for this dwindling saga fails to generate the tension required to maintain interest in the conclusion to follow (in swanky but unrequested 3-D) next July.

As the last installment The Half Blood Prince hinted, the world of Harry Potter has become a scarier, more threatening place. This story opens with a series of poignant sacrifices as Harry (Daniel Radcliffe), Ron (Rupert Grint) and Hermione (Emma Watson) leave the comfort of their families and the alma mater of Hogwarts behind and strike out on their own. Harry’s mortal enemy, the now all-powerful wizard Voldemort (Ralph Fiennes) has taken control of the Ministry of Magic and declared the teenager to be “Undesirable No. 1”. The Orwellian Ministry, now overseen by psychotic housewife Dolores Umbridge (Imelda Staunton), has started a campaign against mudbloods, wizards born to Muggles, the echoes of Nazism underlined by black-shirted soldiers carrying scarlet banners.

Harry’s only hope of stopping Voldemort lies in his finding and destroying the mystical horcruxes, fragments of the Dark Lord's septic soul hidden throughout the magical world. The late, lamented Dumbledore has left behind a series of clues but the central trio must venture out on their own to locate the hidden objects by decoding symbols and tracking down lost witches and wizards, all without the support of their usual champions. Then, suddenly, the trio is split. Paranoid, jealous Ron leaves Harry and Hermione to continue the quest on their own, with director David Yates employing the divide to spin the series’ most unstructured, free-form chapter yet, a lumbering, bleak winter spent camping out, going from shadowy forest to windblown cliffs, as the trio join the dots on their quest while engaging in a timid teenage bicker.

Even with returning screenwriter Steve Kloves cleaving Rowling’s 700 page novel in two more or less equal halves, Yates’ film stumbles under the weight of its awkward exposition. The tone is richly gloomy but the choppy story never achieves the same uniform tenor, unfolding as a procession of crisis moments played as interchangeable action sequences; flashily photographed and edited and awash with impressive CGI effects but essentially inert and uninvolving. Far better are the film’s few quiet moments; the central trio’s bleak trek through the wintry British landscape, a beautiful shadow puppet-inspired animation that explains the origins of the title and a late scene in a snowbound cemetery that is one of the few occasions of emotional honesty in the entire franchise.

It’s not only the story that has matured; these characters have grown up in front of us. Harry’s serious face now sports tufts of wispy stubble, tomboy brain-box Hermione has matured into a sensible romantic heroine while Ron has gone from squeaky-voiced scaredy-cat to square-shouldered hunk. No longer able to hide behind the tag ‘child-actors’, these young veterans, who have been playing the roles for almost a decade, must carry the vast weight of this film entirely on their own. Radcliffe and Grint emerge as the victors, with Watson looking uncomfortable, even when sitting still. What is sorely lacking is something conclusive for any of them to do, with Part 1 only a drawn-out set-up for the last hurrah to come next year. And not a moment too soon.
Posted by John Maguire No comments: 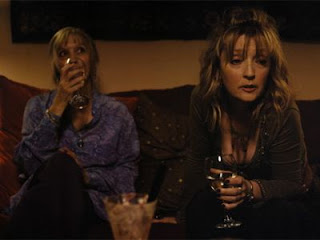 British director Mike Leigh's latest film tells the story of twelve months in the life of a happily married couple, Tom and Gerri (Jim Broadbent and Ruth Sheen) as they interact with a series of unhappy people; family, friends and work colleagues. Not as light-hearted as Leigh’s last film, Happy-Go-Lucky, or as sombre as the long run of films that preceded it, Another Year falls somewhere in between, an acutely observed, bittersweet character comedy.

The film opens with a series of tense, terse scenes where a depressed, middle-aged woman named Janet (Imelda Staunton) visits a doctor for sleeping tablets, before attending – under protest – a session with Gerri, the clinic’s counsellor. In another Leigh film, we might follow Janet’s story but in this one she is never mentioned again. We’re interested in Gerri, and so follow her home to the suburban London house she shares with her husband, the place where they raised their thirty year old son Joe (Oliver Maltman) and where they entertain, now and again, small groups of friends over a bottle of wine. Patient, calm Gerri spends as much time tending to her family and friends as she does to her neat garden and blooming allotment. For his part, steady, sturdy Tom works as a geologist specialising in building foundations, the bedrock of the city. They’re literally the salt of the earth.

Gerri’s closest friend is medical secretary Mary (Lesley Manville) they’ve worked together for twenty years. Scatterbrained and man-hungry, Mary likes to drink and talk, both of which tend to get her into trouble. Then there’s Tom’s childhood friend Ken (Peter Wight); a big, boozy Northern bachelor who comes to visit on his weekends off. As we gradually get to know these characters, not much of anything happens. Mary buys a second-hand car and it is a disaster. Joe brings home his new girlfriend Katie (Karina Fernandez) and she’s lovely; cheerful and chatty and easygoing. Gerri harvests some nice tomatoes. Tom worries about his brother Robbie (David Bradley). Ken gets drunk and falls over.

Chaptered into four separate sections, each titled after a season of the year, Leigh presents all of this in his typically unshowy manner, light on plot but heavy on character, filled with tiny moments of observational comedy and sneakily delicate drama. What distinguishes Leigh from his contemporaries is his ability to make a compelling story out of the material that other filmmakers use as filler. A cup of tea and a stray word turns into a crisis moment in a friendship, a fraught drive to the railway station hinges on an excruciatingly fumbled kiss, a rushed arrival at a summer barbeque opens up questions about the latecomers state of mind. All of these delicate moments might be lost in a busier story but for Leigh they are the reason for making the film in the first place, the entirety of the thing.

As we have come to expect from this consummate actor’s director, the performances from the entire ensemble are outstanding, intricately constructed, richly detailed and profoundly moving. It is a pleasure to spend a couple of hours in their company, even the sad and lonely ones. Especially them.
Posted by John Maguire 1 comment:
Newer Posts Older Posts Home
Subscribe to: Posts (Atom)