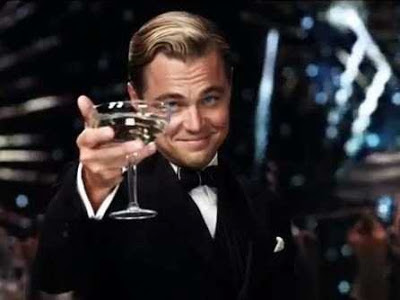 Great just isn’t good enough for Australian director Baz Luhrmann. It’s too small a word for the kind of monumental confections his films have become, elaborately iced wedding cakes that deliver surges of sugary energy but provide little narrative nutrition. Luhrmann’s adaptation of F. Scott Fitzgerald’s timeless novel The Great Gatsby might well be entitled The Stupendous Gatsby, told at a breathless gallop in gaudy 3D with a starry cast of A-list actors and a supporting cast of thousands of faceless digital effects technicians. The effect is like Al Jolsen’s Jazz Singer hitching a ride with The Fast and the Furious. You ain’t seen nothing yet.

The best known adaptation of the book, Jack Clayton’s version with Robert Redford from 1974, suffered from sticking too closely to the source novel with characters standing around reeling off paragraphs of Fitzgerald’s prose in gleaming white clothes. Luhrmann’s uniquely kitchen-sink approach might give the story a bolt of energy, but for a long time he overplays his hand, unable to match his cacophonous vision of the Jazz Age with the different beats of the story.

The film opens with a broken-veined Nick Carraway (Tobey Maguire) relating the last crazy decade of his life to a psychiatrist in a book-lined room. As Carraway tells it, he had moved to New York to take a job on Wall Street when he failed to make his name as a writer. He rented a cottage on Long Island “for eighty a month”, across the water from the house his cousin Daisy Buchannan (Carey Mulligan) shares with her boorish husband Tom (Joel Edgerton), a dissolute, polo-playing scion of a wealthy family. Carraway soon hears fantastical stories about his next-door neighbour, a reclusive young multi-millionaire called Gatsby (Leonardo DiCaprio), who throws enormous parties for New York society every weekend but is otherwise a complete enigma. As the friendship between Carraway and Gatsby grows, we come to learn more about the mysterious man who has built his Xanadu within sight of the woman he is obsessed with, and what part the young Wall Street novice might play in his long-formed plan to recover a lost love.

Although part of the fascination with any literary adaptation derives from seeing what new perspectives a director can find in the material, in the end, the novel is still the novel. It would be pointless to outline the places where Luhrmann and co-writer Craig Pearce’s story deviates from Fitzgerald’s: there are plenty and in the end, it doesn’t really matter. This version is designed only as a cinematic experience, where images and sounds, not words, evoke emotion. The shame is that for a long time, the images in this Great Gatsby remain just that, beautifully rendered and sumptuously ornate pictures that vibrate with theatrical passion but otherwise fail to move the soul.

It’s hard to know what Luhrmann makes of Jay Gatsby, an enigmatic icon in his own story, or if he is interested in portraying him as anything more than a victim of love. Luhrmann’s interpretations all drive his characters towards the one place that he feels most comfortable; tragic, melodramatic romance. Every bump and contour in Fitzgerald’s story is smoothed down to make this passage easier. Nuances turn into vapid clichés through endless repetition, the ornate places and lavish settings become postcards and shop windows and, through dialogue, voice-over and anachronistic music, every awkward nail in Fitzgerald’s knotty story is emphatically hammered home. Luhrmann’s characters cannot see a horizon without staring off into it with a sigh, followed immediately by his swooping camera and a visual trick or two. His techniques are so emphatic, they overwhelm the story. His presence can be felt in every overly-choreographed movement, standing off camera, beating out time. But his rhythm is off.

Every frame of the film has been worked to ribbons by an unseen army of digital effects technicians. It is difficult to invest in characters that appear to be wisps, wandering an imaginary world. Now, before you say it, I realise all films take place in imaginary worlds, but some are more imaginary than others. Nothing in The Great Gatsby feels solid. Nothing feels like it isn’t a film set. The characters are wearing costumes, not clothes. They speak only in dialogue and their behaviour is designed only to advance the plot. Even Luhrmann’s well-chosen snippets of archive footage have been artificially colourised in photo-chemically lurid oranges and blues. There are long sections that look like nothing more than an expensive commercial for a high-end after-shave named Old Sport.

The film gets better as it continues but then it couldn’t have gotten much worse. In the end, it’s the characters that save it, and the actors playing them. They transform from figures in a photograph to people that we can believe might share love. DiCaprio is too good an actor to succumb to Luhrmann’s fumbling and steadily grows into the role, finding his own interpretation on a man who is, all at once, a helpless romantic, a dangerously obsessed weirdo, a ruthless social climber and a crooked gangster. He looks the part too, an almost surreal personification of the urbane sophisticate, suave and certain. It’s strange that one of the most ephemeral characters in American literature should be the most solid presence in the film.
Posted by John Maguire No comments:
Newer Posts Older Posts Home
Subscribe to: Posts (Atom)