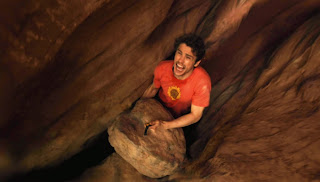 In April 2003, twentysomething American hiker Aron Ralston fell into a crevasse in Utah’s isolated Blue John Canyon. An 800 pound boulder fell with him, landing on his right arm and pinning him against a rock wall and trapping him for the 127 Hours of the title. Director Danny Boyle’s follow up to his Oscar-winning Slumdog Millionaire is a story of survival, obviously, but the director and writer Simon Beaufoy, working from Ralston’s book 'Between A Rock And A Hard Place', expand the gruesome true story into a coming-of-age tale in which a young man facing death assesses how he has lived his life to that point.

The film opens without preamble with an excited Ralston (James Franco) hurriedly preparing for a long bike ride and trek through his favourite wilderness. A couple of hours into the trek, he meets a pair of young women hikers (Kate Mara and Amber Tamblyn), shows them a few of the area’s sights and continues on his way. Shortly afterwards, distracted by the thoughts of the young women’s party invitation, he falls and gets stuck. Jammed against the rock face in a position that would bring tears to the eyes of a yogi, Ralston has only a bottle of water, a small amount of food, his climbing gear and a blunt all-purpose tool with which to survive. Nobody knows he is there and the chances of a rescuer stumbling by are remote.

From then on, which means for most of the ninety-five-minute running time, we’re alone with Franco in a ditch so narrow the light from the sun only enters for a precious fifteen minutes a day. An experienced engineer and enthusiastic outdoorsman, he first attempts to hack at the stone with his dull knife before rigging a complicated rope system to try and extract himself. Nothing works. His mind wandering through exhaustion and dehydration, Ralston ruminates on his short life and imminent death; recalling his family and friends, his ex-girlfriend Rana (Clémence Poésy) and the future life he will not now live in a series of vivid dreams and surreal hallucinations. As his options dwindle, the visions darken. If he is going to get out alive, he must do the unthinkable and amputate his own arm.

The magpie Boyle never makes the same kind of film twice but if there is a running thread through all of his work it is his ability to capture and distil the energy of youth; exuberant, sometimes thoughtless but always quick and exciting. He has the perfect lead in James Franco who plays Ralston as a cocksure thrill-seeker who races out into the world without a thought for his own safety, telling no-one where he is going, looking for total freedom. He finds the exact opposite; a prison made of red rocks and sand. It’s a credit to the director that he doesn’t flinch from depicting the terrible reality of what Ralston had to do to free himself. Squeamish audience members can always shut their eyes (as I did) during the worst of it but, ever the sensationalist, Boyle extends the torture with teeth-grinding sound effects, doubling the intensity of what is already an extreme moment.

For all his recklessness, Ralston’s accumulated regrets amount to little more than white lies, social gaffes and graceless behaviour, a scattered few incidents of awkward stupidity common to all young men. Deep in the pit with death creeping closer, he comes to understand the simple joy in being alive, the importance of family and friendship and the need to be kind.There isn't a lot of suprise to be found in the lessons Ralston learned, what is astonishing is that he lived to learn them.
Posted by John Maguire 2 comments: 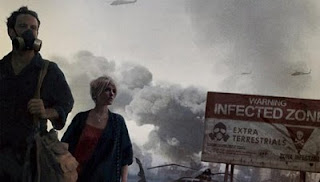 British director Gareth Edwards DIY creature-feature Monsters is a mis-matched romance, a dystopian sci-fi about alien invasion, a sly allegory about illegal immigration and a showcase for the kind of special effects work that can be constructed, with a little talent, from consumer-level digital cameras and laptops. Semi-improvised and made on a shoestring budget with a crew of two people, Monsters is a considerable achievement for the first time director, a sensitive and involving science fiction romance rich in atmosphere and mounted with distinctive style.

A short pre-credits sequence establishes that the US-Mexican border has been infested by dangerous alien beings (resembling a cross between giant spiders and glowing octopuses) that have turned the desert into a no-go zone. World-weary photographer Andrew (Scoot McNairy) has travelled to Mexico to take photographs of the aliens for a newspaper. Travelling through the “infected zone” is incredibly dangerous, with the wandering aliens attacking any humans they encounter. While waiting at the border to cross, Andrew meets rich-girl adventurer Sam (Whitney Able), who happens to be his boss’s daughter. Charged with bringing the wealthy heiress back to safety, Andrew and Sam enlist the help of a gang of local mercenaries and trek through the desert, hoping to reach the safety of America by any means necessary. The locals aren’t too concerned by the alien’s presence; they are more worried about the American military patrols scouring the desert, poisoning the land with chemical weapons.

Like every couple in every road movie ever made, cynical Andrew and cosseted Sam don’t like each other very much in the beginning but their straightened circumstances and the constant threat of imminent death slowly brings them together. The film might be titled Monsters but it might as well be called Humans, as Edwards keeps his focus on the bickering pair as they play out a tender romance against the backdrop of the alien invasion. Rather than undertake a confrontational quest to destroy the aliens, or save the world, Andrew and Sam simply exist in their changed world, getting on with their own lives as chaos falls around them.

Without the budget to deliver wall-to-wall visual thrills, Edwards places his special effects sequences carefully throughout the story, suggesting more than he shows. We catch glimpses of the alien beings from time to time, a tentacle tracing a graceful arc across a television screen or a strange glowing light emerging from the desert night. Although he is working with fewer resources, Edwards creates a complicated mood similar to the South African sci-fi District 9, combining the day-to-day practicality of getting on with things with the blind panic that comes from the threat posed by something unknown and unknowable. Monsters also shares the same underlying social critique as Blomkamp’s film, explicitly asking who are the real ‘monsters’ in the story; the aliens trying to survive in a strange world or the humans who greet their arrival with a vast military blockade?
Posted by John Maguire No comments: 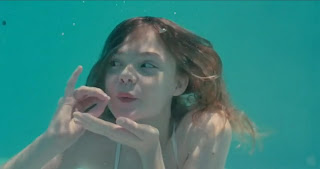 A rich and famous movie star on a promotional tour is stuck in a bland hotel room for a prolonged period, time he passes eating bad food, having unfulfilling sex, staring out the window and wandering around the neighbourhood. The star, jaded with celebrity, eventually meets a young woman with daddy issues and the pair form a tight bond while exploring the city around them. But this isn’t Sofia Coppola’s Lost in Translation its Sofia Coppola’s Somewhere, with Los Angeles replacing Tokyo, Stephen Dorff standing in for Bill Murray and Ellie Fanning substituting for Scarlett Johansson.
The story opens with Johnny Marco (Dorff) checking into the Chateau Marmont hotel on Sunset Boulevard on his own. Marco has a new movie to publicise but he spends most of his time attending parties with his best friend (Jackass alumnus Chris Pontius), drinking and chasing women. Marco is restless and troubled. A fall downstairs resulted in a broken arm and a heavy cast, his new Ferrari isn’t running smoothly and someone is sending him anonymous, aggressive text messages. When his ex-wife turns up to tell him she’s leaving town for a while, he takes in his little-seen eleven year old daughter Cleo (Ellie Fanning), whose busy pre-teen schedule of ice-skating lessons and video-game sessions offers Marco the chance to freshen his soul-deadening routine.

And that’s about it for plot in Somewhere, a film about boredom that is, for the most part, boring. Coppola never finds the emotional pulse of the story, which flat-lines its way through a series of loosely connected incidents in a yawning manner before dwindling away into pretension. At times Coppola’s studied distraction is focused into moments of melancholy observation. Marco attends a press conference where he is asked a series of inane questions by the sun-addled foreign press corps, who can’t think of anything more insightful to say about his dumb action flick. Later, he sits for an hour, immobile in a chair, while special effects technicians make a mould of his head and make him up as an old man. He stares into the mirror for a long time, horror-struck not by what he will become but by who he already is.

Somewhere might be intended as a satire on the vacuous nature of modern celebrity but all traces of acid comedy have been neutralised by Coppola’s chalky treatment; endless, static scenes of vacant luxury that take us on a tour of indistinguishable hotel rooms, glassy swimming pools, chattering casinos and leather-bound car interiors, where father and daughter have stilted conversations about nothing in particular. In another kind of movie, wise-beyond-her-years Chloe would disrupt Marco’s mild debauchery, forcing him to face up to his newfound status as a responsible father. But that doesn’t happen here. Chloe just nestles under her father’s armpit as he goes around in circles, bringing light and joy and asking for nothing in return. Its undeniably cute stuff and Fanning gives a charming performance but without any hint of crisis or drama the story drifts and dwindles aimlessly, fuzzy and self-absorbed. The closing scenes are bewilderingly opaque, reinforcing the sensation that Somewhere is going nowhere.
Posted by John Maguire No comments:
Newer Posts Older Posts Home
Subscribe to: Posts (Atom)