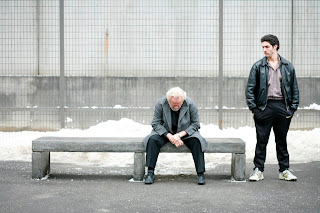 A Prophet, the new film from French genre stylist Jacques Audriard (The Beat That My Heart Skipped) is a remarkable crime epic, told with the director’s signature visual flair, centred on a young French Muslim’s struggle to survive a six-year sentence in a tough prison.

A petty criminal, Malik El Djebena (Tahar Rahim) arrives for his first day in the prison as an innocent thrown to the lions. Almost silent and obviously terrified, Malik is not yet a true criminal as much as he is a desperate young man. We are told he knows nobody in the jail, has no friends or family outside, no education, no resources and no plan for survival. The story of A Prophet is about how Malik comes to formulate a way out, not through the traditional escape of digging through walls but the construction of a new life outside, financially and psychologically.

The first movement of Audiard’s crime opera has Malik fall under the benign spell of Cesar Luchiani (Audriard favourite Niels Arestrup), a Corsican Mafioso who threatens to kill him unless he murders a fellow inmate, Reyeb (Hichem Yacoubi). As the Corsican keeps a close eye on proceedings, Malik puts his plan to befriend and seduce the target, practising the execution in his cell. He has no choice but to kill, and from that point on Audiard slowly and masterfully tightens the noose around the young man’s neck as the Corsican returns with further favours to ask and threats to enforce. In the film’s most audacious move, Reyeb returns as a ghost to train his own killer in how to survive.

From that point on, Audiard moves Malik carefully through an occasionally confusing maze of criminal characters, divided loyalties, sensational set-pieces plans and absorbing confrontations. A Prophet is worth seeing if for no other reason than the intensely powerful central performance from newcomer Tahar Rahim who reminded me throughout of a young Robert De Niro, bristling with energy and an ability to twist his lumpy face into extraordinarily sincere expressions.

Audriard’s toneless palette of concrete grey and criss-crossed steel makes the prison a vision of a modernist hell, the cell walls looming over the inmates, their tiny rooms filled with remnants of the outside becoming shrines to regret and revenge. The photography and editing is exemplary; the early scenes shot with a half-closed iris emphasise Malik’s new claustrophobia before the camera finds the courage to stalk the corridors, trailing the young hoodlum as he finds his feet and a way out.

Audriard and his co-screenwriters Thomas Bidegain, Abdel Raouf Dafri and Nicolas Peufaillit have combined to tell an elegantly structured story in which the accretion of tiny details and fascinating characters make A Prophet gripping from beginning to end. This is a sinewy genre story about hard nuts doing hard time that has the capacity and intelligence to address issues like social exclusion, criminal rehabilitation, state corruption and French national identity. It might be only the end of January, but A Prophet is one of the films of 2010.
Posted by John Maguire No comments:

Up In The Air

Writer director Jason Reitman follows his charming teen-pregnancy comedy Juno with an adaptation of Walter Kim’s novel, Up In The Air, in which introverted HR specialist Ryan Bingham (George Clooney), travels around the US firing people from struggling corporations.

With his perfectly knotted ties and dapper suits, Bingham comes across as smooth and successful executive but he lives a strange life. Home, a mostly-empty apartment in Omaha, is just somewhere to store his suitcases. There is no Mrs Bingham, and he avoids contact with his family, even as his younger sister (Melanie Lynsky) prepares to get married. In his wry voice-over, he tells us all about the “322 days a year” he spends in airports and hotels, sharing a few tips about how to be a savvy frequent-flyer. Among his most prized possessions are various loyalty cards, oblongs of embossed plastic that allow him to access the jet-set lifestyle - perks and upgrades - with a sweep of his hand and a smile.

Bingham works for a company run by the up-tight Craig (Jason Bateman), who specialise in firing employees for corporations that lack the skills or the decency to do it themselves. Business is booming. Every day, he arrives at reception, sets up a desk with his list of names and piles of severance brochures and starts his spiel about “seeking out new opportunities”. Throughout the film Reitman employs long sequences of face-to-face interviews with the newly downsized as they talk about unemployment. If you’re wondering why these people seem normal and sincere, it’s because they are. Barring a few extended cameos from familiar faces JJ Simmons and Zach Galifianakis, these are ordinary real people telling their own stories of how they coped with losing their jobs.

Even with those touches of poignant realism, Up In The Air remains a comedy derived from a character study. The story, like Bingham’s face, lights up when he meets kindred-spirit Alex (Vera Farmiga) in a hotel bar and they start comparing the size of their stacks of plastic, like Las Vegas gamblers. Before long, they are synchronising their calendars and arranging rendezvous on the road, pit-stops across America that slowly thaw Bingham’s frozen concepts of romance. Then, new developments at work pose a challenge to his set routines. Natalie (Anna Kendrick), an ambitious junior executive, has come up with a new way of firing people over the internet. Bingham is appalled. Not only does the technology threaten to do to him what he has been doing unto others for years, it removes the human equation from his work. His well-practised common-sense lines will sound hollow when coming through a tinny computer speaker. His sympathetic brow-wrinkles and comforting nods will lose their effects when played out on a flat-screen monitor.

Even if the sight of a smiling George Clooney in a well-cut suit has become a cinematic cliché, the actor extends himself in the role of a lonely executive to give an honest, heartfelt performance that plays up to his own image as a smooth-talking charmer as much as it exposes him as a solitary figure, lost in a plush, premium-grade world of single-serving meals and tiny shampoo bottles. His performance is matched in nuance and vulnerability by Farmiga, who is much more than mere romantic window-dressing and whose back-story, when revealed, offers a salty ironic bite.

Although fashioned from the pain and misery of sudden unemployment, under Reitman’s certain direction Up In The Air finds a delicate balance between zeitgeisty comedy and trenchant reportage to become a signature film for our recessionary times.
Posted by John Maguire 1 comment: 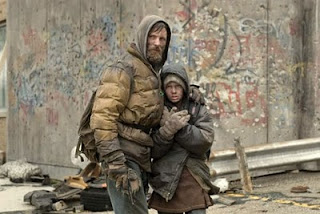 The Road is one of the most frightening, dark and despairing books to have been written in the last decade but it struck a chord with readers, selling millions of copies around the world and winning the Pulitzer Prize for its author, Cormac McCarthy.

The last film adapted from one of McCarthy’s novels, The Coen Brothers’ No Country for Old Men, went on to win four Oscars, including Best Film, and similar success looks likely for Australian director John Hillcoat’s hypnotically bleak film, a chilling vision of the end of days that sticks closely to the story McCarthy hammered out in his unique staccato style.

The apocalypse is a recurring theme in recent cinema, with filmmakers tripping over themselves to forecast how the curtain will drop on planet earth. Roland Emmerich’s tongue-in-cheek adventure 2012 bewildered us with neutrinos before scrambling for the safety of the Ark. Hillcoat gives us, simply, fire. An unexplained cataclysmic blaze races across the world, turning everything in its path to ashes. An unnamed man (Viggo Mortensen) and his ten year old son (Kodi Smit-McPhee) walk through a country reduced to embers and swirls of smoke, an unchanging grey sky smothering a blasted planet in sooty rain. There is almost nothing to eat and little clean water. Everything is covered in choking ash. The man and his son are pushing a shopping-trolley with their few possessions along an endless road, moving south in the hope of finding the sun and any sign of life.

As the two walk, they encounter other survivors, a blind old man (Robert Duvall), a thief (Michael Kenneth Williams, Omar Little from The Wire), and an unseen assailant with a bow and arrow. The man keeps a gun strapped to his chest with just two bullets remaining, a safeguard against being captured alive by the gangs of cannibals who roam the roads, looking for survivors. He snatches a few hours of sleep when he can, disturbed by dreams of his wife (Charlize Theron), who deserted them years ago, when she walked out into the blaze, unable to contemplate the future.

To say any more would ruin the story for those who have not read McCarthy’s book. Hillcoat and his screenwriter Joe Penhall have removed some of McCarthy’s more gruesome episodes and placed their emphasis on the spiritual elements of the story but much of the overwhelming threat, violence and despair remains. The Road is a feel-bad film, relentlessly so, but it is a beautiful one; conceived and realised with dreadful exactitude.
Posted by John Maguire 4 comments:
Newer Posts Older Posts Home
Subscribe to: Posts (Atom)