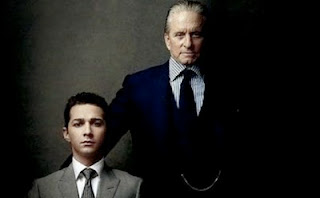 Oliver Stone continues his late-career run of unwatchable duds with Wall Street: Money Never Sleeps, a sequel to his era-defining original, released just two months after Black Monday in 1987. The story of the fall from grace of Michael Douglas’ greedy Gordon Gekko might have been intended as a cautionary tale but it came to be regarded as an advertisement for the culture of excess it condemned. Twenty years later, everything is different. The markets might be volatile, but turning the ongoing financial collapse into a compelling and satisfying cinematic story requires a surer hand than Stone can provide.

As the new film opens, Stone’s semi-demonic anti-hero Gordon Gekko (Michael Douglas) is being released from prison after serving an eight year stretch for insider trading. Shortly afterwards, the irrepressible Gekko has regained his place at the trough, writing a bestselling book about the state of the markets that garners him plenty of press attention and a lucrative lecture tour. “You're the NINJA generation—no income, no job, no assets,” he tells a crowd of applauding acolytes, including young investment banker Jacob Moore (Shia LaBeouf), who just happens to be engaged to Gekko’s estranged daughter, left-wing blogger and activist Winnie (Carey Mulligan). Jacob starts meeting with Gekko behind Winnie’s back, pumping the financial guru for career advice in exchange for facilitating a family reunion.

Not content with one villain, Stone introduces a new breed of reptile in Josh Brolin’s swaggering Bretton James. James came of age in a time when Gekko’s personal credo of “greed is good” became an aphorism, the first line on the first page of the Wall St trader’s handbook. James also serves to introduce rising talent Jacob to the good life, displaying his expensive art and lighting fat cigars and, later, challenging him to a macho race through upstate New York on expensive motorbikes.

Stone and his cinematographer Rodrigo Prieto bring a glitzy look to the melodrama, turning Manhattan into an arrangement of ornate structures and kaleidoscopic lights. Stone’s determination to decorate his moral sewer with glittering jewels reaches a climax in a bizarre scene at a glamorous reception where the camera glides through the crowd, settling on the enormous, sparkling earrings of the women in the crowd. Having arranged a seamless baker’s dozen of these elaborate jewels, the director hammers home his point about ill-gotten glories by closing on Mulligan’s demure pearl studs.

With characteristic modesty and subtlety, Stone is attempting to distil and define the recent financial collapse as a pantomime of good versus evil, pitting his cardboard cut-out characters against one another while, in the background, the world they inhabit collapses. In the underdeveloped script there are long passages when nothing seems to happen for long periods before a sudden tsunami of emotional crests all arrive at once. The death of Jacob’s mentor (a well-used Frank Langella) collides with his proposing marriage to the soporific Winnie. Later, the revelation that Winnie is pregnant, and Jacob’s realisation that he is soon to be a responsible family man, is crowded out by a quickfire series of Machiavellian manipulations from Gekko’s grinning villain.

Perhaps the time he spent with Fidel Castro for his documentary Comandante has eroded Stone’s faith in American capitalism. Wall Street II is not an investigation into the movement of modern money, or how lax banking regulation eventually breeds corruption, but rather a series of carelessly arranged vignettes on the themes of honour, loyalty and shame. The result is that while Stone’s second wander down Wall St never wants for incident, it is impossible to care about any of his characters and the story floats off into a sloppy, soppy conclusion.
Posted by John Maguire No comments: 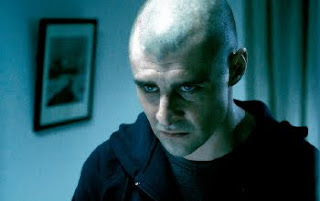 Darren Healy plays jobbing photographer Paul Graynor, who spends his working life outside the Four Courts, snapping criminals as they emerge from the back of police vans. Lonely and withdrawn, the only person Paul talks to, other than his elderly, ailing father, is the old man’s nurse, Michelle (Nora-Jane Noone). Having plucked up the courage to ask her out, Paul and Michelle start a tentative relationship. But on the way home from their first date, Paul is mugged in a side-street. His attackers respond to his cowering fear with an even more brutal assault, which leaves Paul with horrific injuries. Unable to come to terms with what has happened; mild-mannered Paul retreats to the isolation of his city-centre apartment where he hatches a plan for revenge.

Impressively photographed, edited and scored, Savage is a slick looking film, even more so when the very low production budget is taken into consideration. However, the glossy production work isn’t enough to override the fundamental flaws in the greasy story. The film is littered with moments of clanging implausibility. The assault Paul suffers (which, in fairness to the potential audience, I cannot reveal here) is burdened by an unnecessary metaphorical weight that the rest of the story struggles to carry.

Later, Paul’s interactions with authority figures, policemen, doctors and psychiatrists, are improbably perfunctory and glib; a complete misreading of the post-traumatic psychiatric care process and something that could have been rectified by further research or the application of common sense above cinematic expediency. These clumsy exchanges are not intended to help Paul but rather to push him towards his transformation into an agent of bloody vengeance. The point is hammered home in a sequence where Paul watches a reactionary television pundit espouse about our “brutal society” being at a “tipping-point” before pledging to kill anyone who breaks into his house.

The two leads give performances of more nuance than the material they have to work with. Healy is entirely convincing as the traumatised young man, struggling to come to terms with changed life prospects while Noone is both hard-edged and soft-hearted as the pragmatic nurse, looking to help him. But as the story develops, it becomes increasingly difficult to sympathise with Healy’s fascistically-drawn Übermensch, shaving his head, necking illegal steroids and waving a big knife while Noone, an angelic sounding-board, offers nothing but timid objections. Muldowney is clearly influenced by films such as Taxi Driver, Death Wish and Straw Dogs in depicting a man who reacts to the violence he meets by becoming violent in return. But the writer and director fails to capture the dangerous ambiguity of his genre predecessors and Savage deteriorates into a didactic lecture about the dangers of vigilantism. For all its flaws, Savage is a statement of intent from Muldowney and his producer Conor Barry, a film that shows their considerable promise for the future.
Posted by John Maguire No comments:
Newer Posts Older Posts Home
Subscribe to: Posts (Atom)