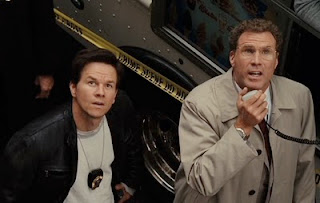 For the first couple of minutes, Adam McKay’s frantic, funny buddy-cop comedy The Other Guys seems precisely like the kind of pyrotechnic action adventure Don Simpson and Jerry Bruckheimer knocked out during the grim, high-concept 1980s. Swaggering super-policemen Highsmith (Samuel L. Jackson) and Danson (Dwayne 'The Rock' Johnson) race through the New York streets, firing off guns at random and reducing the streets to rubble in a series of mushroom-cloud fireballs, the same ones that top-line stars always emerge from unscathed. Shortly afterwards, Highsmith and Danson make an unexpected and permanent exit, leaving the road clear for their successors, mild-mannered forensic accountant Allen Gamble (Will Ferrell) and his unwilling partner Terry Hoitz (Mark Wahlberg), an uptight loose cannon.

Somehow (the plotting is never entirely coherent) Gamble and Hoitz become involved in an investigation into a massive fraud perpetrated by Steve Coogan’s unctuous billionaire David Ershon. The more the two idiots dig around in Ershon’s affairs, the more pressure their superiors apply to have then drop the case. Eventually, with the help of their despairing captain (Michael Keaton), the two find a way to connect the billionaire investor with a deeper corporate conspiracy, a pointed message about the recent financial meltdown that sees the film conclude with an odd series of Michael Moore-like title cards that explain the mechanics behind a Ponzi Scheme. The loose plot is, of course, entirely beside the point and exists only as a platform for Ferrell to deliver a series of very funny riffs on various subjects.

McKay has scripted and directed a series of successful comedies with his chosen leading man Ferrell, from Anchorman to Step Brothers, with The Other Guys proving a close fit for the pair’s well-established blend of surreal comedy, sight-gags, subversive genre homages and incongruous celebrity cameos. Ferrell is very funny here, even if he is operating well within his limits as the dunderheaded, oblivious cop. As is so often the case with Ferrell, the funniest lines appear to be throw-away non-sequiturs, often delivered as off-screen asides. Perhaps the film’s greatest surprise is the delicate, frequently hilarious performance from Mark Wahlberg who plays the straight-man Hoitz as a frustrated Alpha male with barely concealed psychopathic tendencies. From the secondary cast, Eva Mendes gives a neat turn as Gamble’s unexpectedly beautiful and dutiful wife while Rob Riggle and Damon Wayans are outstanding as a pair of teeth-gratingly irritating fellow cops, straining to become the new superstars on the force.

The Other Guys is not a comic masterpiece for the ages but it is about as good as audiences can expect from a late-summer studio offering. It doesn’t all work, there are a couple of sequences that fall completely flat, but when Ferrell and Wahlberg do click, the film hums with an irresistible comic energy, combining note-perfect character comedy with a delirious send-up of cop-movie clichés.
Posted by John Maguire 1 comment:

Scott Pilgrim vs The World 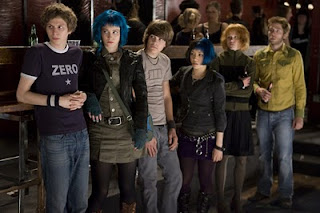 As the story opens, twentysomething Scott Pilgrim (Michael Cera) is engaged in a chaste, hand holding affair with a high-school girl named Knives Chau (Ellen Wong). Knives thinks that Scott and his band Sex-bob Omb (with bearded frontman Mark Webber and the adorably bad-tempered Alison Pill behind the drums) are the coolest thing ever, but then by her own admission, she only discovered good music a few months ago. Scott spends his days playing the bass and sitting around. He doesn’t have a job, or much to do, and he doesn’t particularly care.

Then, on the same day that his roguish gay roommate Wallace (Kieran Culkin) tells him he must move out of the apartment, Scott meets and instantly falls in love with a pink-haired parcel courier named Ramona Flowers (Mary Elizabeth Winstead). His attempts to woo her with arcane Pac-Man trivia falls flat, so instead, Ramona presents him with a challenge: to win her heart he must defeat her seven evil ex-boyfriends (and one girlfriend) in battle. So Scott’s eternally static life is periodically jolted into action by the regular arrival of flamboyant former flames looking to fight to the death, his only help coming from a series of snazzy power-ups and kung-fu special moves familiar to anyone who ever picked up a joystick.

The original comic books are a paean to gloriously wasted youth; an innocent, slouchy dissolution that squanders time on gaming consoles, television and movies. These disposable, quotable pleasures are the source of Scott Pilgrim’s infinite variety of catchphrases, inside-jokes and conversational titbits. Whether you’ll like the film or not is heavily dependent on your ability to tune your ear to Scott Pilgrim’s particular nonsense-frequency.

From the opening Universal credit sequence, rendered as a 16-bit animation, through to the rain of coins that accompany a vanquished foe, Scott Pilgrim is steeped in video-game culture. There are snatches of soundtrack from classic games like Zelda and Super Mario Brothers and visual lifts from dozens more, scattered throughout the story in a series of knowing nods to the audience’s misspent adolescences. Set in the local music scene in Toronto, this is a film about music, too. Buried beneath the babble of nerd-talk, Seinfeld theme tunes and Donkey Kong references, both comic book and film make a stirring case for listening to and playing music as the antidote to teenage boredom.

The pairing of an anxious, fumbling loser with a smart woman who is way out of his league is beyond cliché at this point, particularly for Michael Cera, who in his dozen films has yet to play any other character. That Scott Pilgrim rises above the familiar to become something surprising and fresh is partly owing to Wright’s kinetic visual style but also to the robust performances from the female characters, including Anna Kendrick as Scott’s snide sister and Aubrey Plaza as Julie, a coffee-shop barista who never tires of reminding our hero that he is an idiot. It’s not all fun and games, however. The burgeoning romance between Scott and Ramona is severely weakened by the regular arrival of yet another elaborately over-dressed bad-guy and another elaborately over-choreographed fight sequence. A few of these scenes might easily have been removed without harming the storyline, but that might have met with a negative response from comic book fans, who typically demand absolute devotion to the source text.

I got some big laughs from Scott Pilgrim, more than any other comedy so far this summer. It’s witty, sweet and very geeky and, best of all; it doesn’t ask to be taken seriously. There is no real purpose to any of the uncountable homages rendered other than that they are, or were once, something teenagers got a kick out of. That’s not to say the film is entirely empty. Wright imbues his characters with a charming sincerity and openness, with Scott and his friends willing to embrace novelty and accept difference. They’re smart, too. “Don’t let the past ruin the future”, someone says in a rare quiet moment, sound advice whatever the age bracket.
Posted by John Maguire 1 comment: 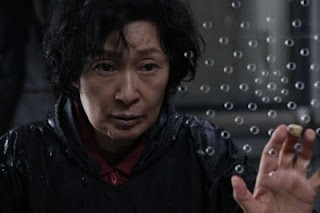 Korean writer and director Bong Joon-ho’s new film Mother is a slippery mix of Oedipal drama (as the title suggests), grisly murder mystery, robust physical comedy and cutting social commentary made with a deft grasp on a shifting tone and photographed with the director’s trademark visual acuity.

The film opens on an unsettlingly weird scene as Hye-ja Kim’s nameless single parent wanders through a grassy field before starting an awkward, arm-waving dance directly to camera. The owner of a small herbal remedy shop, she is mother to a mentally challenged young man (the neighbours unkindly refer to him as a “retard”), who she has protected since childhood.

Now in his early twenties, Yoon Do-joon (Won Bin) spends his days hanging out with his only friend Jin-tae (Jin Goo), drinking too much and talking about girls. One night, when wobbling home from the local pub, Do-joon finds himself trailing behind a local schoolgirl. He tries to talk to her, but she ignores him. The next morning, she is found dead on a rooftop with all the clues pointing to Do-joon as the culprit. His horrified mother refuses to believe the police verdict and while her son sits in prison awaiting trial, she launches her own one-woman investigation, retracing her son’s steps on the night in search of the truth. She is the only person in the rural town who believes her son is innocent, and in the face of public ridicule, stands alone in trying to clear his name. Her sleuthing leads her to uncover a sleazy schoolgirl sub-culture of sex and violence, hidden just below the polite veneer of Korean society.

As in Bong’s previous films, monster-movie The Host and police procedural Memories of Murder, the writer and director delights in establishing the basic schematics of the genre film, the wronged-man thriller in this case, and then gently teasing the threads apart before re-weaving them into something totally unique and utterly compelling. Mother is an impeccably realised murder mystery but it goes on to become a devastating character study of a woman pushed to the edge of reason by circumstances she failed to control. Kim Hye-ja, a Korean television actress previously unknown to me, gives an astonishing performance as the overprotective, intrepid mother, running the gamut from Mary Poppins to Miss Marple to Lady Macbeth.

Starting at one place and slowly, inexorably migrating to somewhere completely different, Bong’s combination of dazzling cinematic craft, psychological insight and compelling storytelling make Mother one of the films of the year.
Posted by John Maguire No comments:

The Secret In Their Eyes 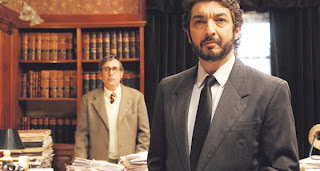 The surprise winner of last year’s Academy Award for best foreign-language film, (pipping the twinned favourites A Prophet and The White Ribbon) Argentinean mystery The Secret in Their Eyes is a gripping story of love and death centred around an unsolved crime in Buenos Aires.

Ricardo Darin excels as Benjamin, a court investigator tormented by the rape and murder of a young bride in her home in 1974. Twenty five years later Benjamin, now retired and struggling to fill his days, is attempting to write a novel about the case and so casts his mind back to the original investigation he undertook with his partner Sandoval (the superb Guillermo Francella). When Benjamin takes a draft of his book to his former boss, Irene (Soledad Villamil), they begin to reminisce about their own relationship, professional and otherwise.

Alone at home, Benjamin revisits the details of the crime, looking to find closure, both for himself and his book. Through extended flashbacks, director Juan José Campanella reveals how the young woman was brutally killed, the effect her death had on her equally young husband Morales (Pablo Rago), and the fractured details of the original, stifled enquiry.

From these beginnings the director, from a screenplay by novelist Eduardo Sacheri, weaves a complex, novelistic story of delayed justice, using the long-forgotten crime as a springboard for ruminations on love and loss and the passage of time. Later, the story expands to incorporate a pointed political message about Argentina’s Dirty War in the 1970s, during which thousands of innocent people were “disappeared” by Jorge Rafael Videla’s military junta.

Although it arrives in Irish cinemas too late to take advantage of the Oscar buzz, The Secret In Their Eyes is the kind of movie they really don’t make very often anymore; a good story, well told. A standout chase through a soccer stadium, seamlessly assembled from dozens of individual shots, injects an adrenal thrill to the story at the mid-way point and is worth the price of admission alone. The complexities of how the scene was shot are as mystifying as anything in the story itself.

There are flaws; the film overplays a series of strangled romantic moments and, more pressingly, struggles to settle on an ending, but these are minor missteps in what is an absorbing drama filled with vivid, beautifully acted characters.
Posted by John Maguire No comments:
Newer Posts Older Posts Home
Subscribe to: Posts (Atom)