The Pirates! In An Adventure With Scientists 3D 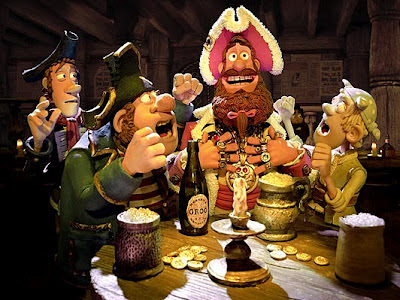 Beloved British animators Aardman return to cinemas after a six-year hiatus with their first stop-motion film since Wallace and Gromit: The Curse of the Were-Rabbit. Adapted by author Gideon Defoe from his bestselling series of children’s books, The Pirates! In An Adventure With Scientists is the studio’s first 3D outing and their first collaboration with Sony after making three full-length films with DreamWorks but everything else about the film fits within their carefully crafted body of work; being visually and verbally witty, rousingly entertaining and a treat for kids of all ages.

The title might be a little awkwardly punctuated but it tells you all you need to know about the plot, capturing something of the misplaced enthusiasm of the hapless buccaneer protagonists and the real-life (if humorously re-imagined) historical figures of Charles Darwin and his fellows at the Royal Society, under the patronage of a seemingly psychotic Queen Victoria. Better known recently for his tabloid-busting exploits than his movies, Hugh Grant emerges from semi-retirement to voice the prosaically named Pirate Captain, another in Aardman’s long line of loveable-loser heroes.

The Captain might see himself as a blood-thirsty, salt-encrusted sea-dog but he and his crew are more interested in slicing up joints of meat on his ship’s celebratory Ham Night feasts than dividing chests of ill-gotten doubloons. With his luxuriant beard and puffy shirt, The Captain has long held a dream to be crowned Pirate of the Year but faces stiff competition from his more daring rivals, including Black Bellamy (Jeremy Piven) and Cutlass Liz (Salma Hayek).

In an effort to impress the judge (Brian Blessed in full voice), The Captain and his crew (including Martin Freeman, Brendan Gleeson and Ashley Jensen) start a campaign of boarding every ship they spy through their telescopes, eventually attacking The Beagle and kidnapping a terrified Darwin (David Tennant). Having quickly assessed the pirates as being of little threat to his well-being, Darwin advises them that their beloved parrot Polly is in fact the last surviving dodo, which can be exchanged for gold and glory in London. The trouble is that Queen Victoria (a seething Imelda Staunton) is virulently anti-pirate, requiring the crew to don a series of inventive disguises in order to present their prize as Darwin and his house-trained chimpanzee butler (who dryly comments on the action with placards, in the style of Wile E. Coyote) threaten to steal it for themselves.

The Pirates has all the key qualities of an Aardman film: the stop-motion animation is meticulously executed and distinctively charming, the voice acting is perfectly pitched and, perhaps most importantly, every frame contains a studio in-joke, a witty movie reference or a gag pulled groaning from an old Christmas cracker. There are moments of slapstick, character comedy, ridiculous puns, thigh-slapping one-liners and a whole series of jokes that will sail over the heads of the younger audience members, including an audacious cameo from The Elephant Man. Central to the success of Aardman’s film is the very British combination of frozen-smile embarrassment and crippling insecurity that Grant has been assiduously mining for the past two decades, although he has only rarely been as likeable. Despite a palpable sag in the middle, where the story could have used a twist or two, Aardman’s wondrous imagination and subversive sense of humour carries the film to a stirring finale with a series of frenetic chase sequences that recall their best work in The Wrong Trousers.