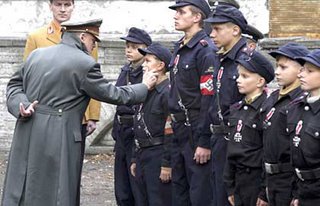 Best of 2005
I'm asked all the time, 'What's your favourite movie?' Tediously, I don't have a ready answer (although I do sometimes say Goodfellas for the sake of saying something, and I really do love Goodfellas), so in that spirit, although in no particular order and for all sorts of reasons, these are the movies I liked the best at the cinema this year.

If I had to pick one to recommend above all the others, it'd be The Downfall (Der Untergang). That took a few days to get over.

The Assassination of Richard Nixon

A History of Violence

The Beat That My Heart Skipped

Wallace & Gromit: Curse of the Wererabbit

A Tale of Two Sisters


Worst of 2005
More than a few of these poisonous pieces of fosillized meso-stupid era Hollywood dog turds would have no trouble making the line-up in Worst of All Time List, should such a thing ever exist.

Especially Elizabethtown. That too took a couple of days to get over, but it was more like waking up to find yourself covered in your own shit and not having a clue how it got there...Kind of a thing that would stay with you.

Are We There Yet?

The Dukes of Hazzard

I don't want you to leave you with the foul hum of Guy Richie's bag of old kabollocks still in the air, so the best book about movies I read this year was The Stanley Kubrick Archives from Taschen and the best song I heard was "Let My People Go" by Darondo, from his soon-to-be-re-issued LP. Happy New Year. 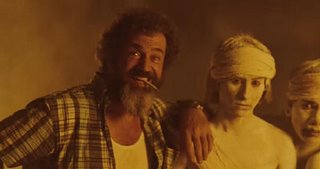 The first teaser trailer for Mel Gibson's Apocalypto is online. The new, aging Mel is some kind of something, but he's always had a reputation as a bit of a joker. The film might be about the bloody end of a Mayan society, but for now it just looks like a conventional enough trailer for a flashier take on John Boorman's Emerald Forest. Mel, (oh he's gas, Mel) won't actually appear in the movie, but does make a bizzare, fleeting appearance in the trailer (see the solitary framegrab above).

The sharp-eyed among you should go see for yourselves, wait for the second appearance of the white faced whatevers and use the Quicktime controls to find the frame he appears in. It's either that or play it a couple of times and blink quickly at the screen. I'm telling you, when he pops up, with the cigarette and the mad grin and the George Lucas directing plaid and the beard, it's weird. Does make you wonder how seriously he's going to treat the subject, maybe, a little bit? Can anyone think of another instance where an A-List director played a joke like this in a trailer? via Cinemablend 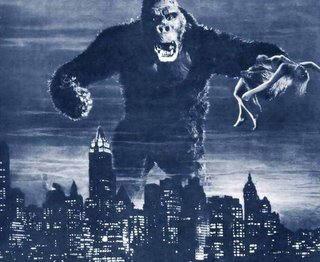 A big star needs a big picture, and Peter Jackson’s wonderful reworking of the classic monster movie King Kong is as big a picture as could possibly fit on a cinema screen. Over three hours long, bursting with innovative digital special effects and coming with a price-tag of something like €230 million; from the unexpected tingle that accompanies the period opening credits through to the famous final battle on the Empire State building, you get to thinking that they don’t make them like this anymore.

The trouble is though, they did, once. Venerated as the first blockbuster movie, alluded to and parodied in everything from Jurassic Park to The Rugrats in Paris, the original 1933 Kong casts a suitably enormous shadow across the last seventy years of entertainment. The sensations aroused by witnessing a giant whatever thundering through skyscrapers and scattering all before it might just have been exhausted by the legion of films that have taken their inspiration from Merian Cooper’s sensational puppet show. Thankfully, Jackson succeeds in paying his homage and remaining true to his source while crafting a wholly modern, seat-grabbing crazy cinema thrill-ride.

What a mad story this is anyway. Carl Denham (Jack Black), a shyster filmmaker, driven to the edge of hysteria by his thirst for fame, drags his cobbled-together filming unit halfway across the Pacific Ocean, searching for a long-lost island where he hopes to find and film, a legend. His leading lady, plucked from starvation hours before, is Ann Darrow (Naomi Watts in the role made iconic by Fay Wray), who only agrees to go because she admires the political playwright Jack Driscoll (Adrien Brody), who has been shanghaied into writing the script. Denham tries to keep their destination a secret, but one crew member eventually demands to know. “It has a local name,” Denham says. “I'm warning you, it doesn't sound good.” Although it takes an hour to get there, there’s hardly time to catch your breath once the ship arrives at Skull Island. Quickly running into trouble with the natives, just as savage as they were in 1933, the frantic filmmakers and mutinous sailors meet the island's resident king of the jungle, King Kong, a hulking 30-foot gorilla with a mean streak a mile wide and a newfound weakness for petite blondes.

As your eyes adjust to the dazzling widescreen vistas, Jackson fills them with a dizzying array of chasing monsters, blistering gunfights, bottomless ravines and instant, squishy death. An elaborate set-piece with a pack of stampeding brontosaurus decimating the crew follows hot on the heels of Kong’s first escape, with Ann Darrow in hand. Before you have time to catch your breath, three vicious T-Rex battle Kong (still gripping his prize) up a mountain and down a vine-tangled ravine. Jackson’s carte blanche even gives him the time and space to include his take on Cooper’s legendary lost ‘arachnid pit’ sequence – a terrifying scene where the jungle explorers are devoured by giant spiders that the original director removed for ‘pacing reasons’ – but chiefly because no test audience in 1933 could bear to watch it, and fled the cinema, making the rest of that film somewhat redundant. Although Jackson’s version of the deleted scene is scary, there isn’t a pacing issue because there isn’t time to think. It’s suitably icky, but is followed by an attack of giant vampire bats, then more explosions and finally, a chase that leads all the way back to New York and an appointment on top of the Empire State. It’s the finest hour in action cinema for decades and one you simply cannot miss.

Jackson's astonishing talent with digital creations tends to overshadow the simple fact that he's pretty good with ordinary human actors too. To create his Kong, Jackson called again on actor Andy Serkis, who played Gollum in LOTR and has perfected this sort of motion-capture performance. He gives an extraordinary humanity to the role, making Kong unnervingly sympathetic. This is a big role for Naomi Watts – filling boots that proved far too big for Jessica Lange in the camp remake in 1976. Occasionally tender, always determined, Watts does much more than scream her way through what is a complicated set of character motivations. Is she in love with the monkey or what? She sure acts like it. At the heart of the film is Jack Black – the flailing Californian fatso – whose natural slyness is perfect for the oily, scheming Denham, who survives to write the ape’s epitaph, taken directly from the original.

As Denham says, it's the old story of beauty and the beast. But films are different things now, seventy years on. The $229 million dollar difference in the price tag, for one thing, but Hollywood’s requirement for bi-annual ‘event’ blockbusters, each bigger than the last, coupled with the modern cult of celebrity directors means that there has to be more to Jackson’s film than the act of making it, however impressive that feat is. In blockbuster cinema, the moviemaking is more important than narrative. The act, in effect, is the play. Although King Kong (which is, neatly, a film about making films) has since become an icon, there weren’t dot coms and video games and credit cards and all-pervading merchandising lines back in 1933. Today, you could live a comfortable all-Kong branded existence, from toothbrush and cereal in the morning to pyjamas and novelisation at night. What has happened to entertainment, and where is it going? Kong’s fatal fascination with glamour and novelty are pretty much the same ones that propel us into cinema seats today. The monster’s loneliness and isolation, his all-too-human desire to escape a threatening world through a glimpse of beauty and a taste of desire are the unspoken pulses in the heart of this film, and the heart of all films.

It has to be said Kong isn’t perfect, but it’s as near as makes no difference. Some of the chase sequences have a rushed, muddy look, a couple of the human actors (Colin Hanks in particular) don’t have much to say or do. The story staggers a couple of times, but then it is over 70, and could be forgiven the creaks. But these are nitpicks at best, Jackson is a jaw-dropping visualist in seemingly effortless control of the most unpredictable of all monsters, the modern big-budget blockbuster. That he manages to make these films at all is a thing of wonder, but that he can still tell a pulsating human story, no matter how fantastic, amongst the blizzard of zeros and ones, is nothing less than astonishing. In the end, Jackson has exceeded himself in delivering a wholly revitalised big-screen Kong (and it really must be seen on a big screen) that, like the petite object of his desire, will have you in the palm of its hairy hand.