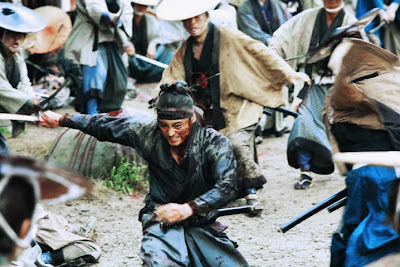 Takashi Miike’s elegant samurai adventure 13 Assassins is a loose remake of Eiichi Kudo’s 1963 film of the same title, itself a reworking of Kurosawa’s Seven Samurai.

Japan’s most prolific and notorious filmmaker, Miike is primarily known as a provider of ultraviolent, transgressive horrors like Audition and Ichi The Killer. But the writer and director can turn his hand to anything, dabbling in Westerns (Sukiyaki Western Django), musical comedy (The Happiness Of The Katakuris), crime drama (Agitator) and avant-garde art-house (Gozu). Now, following in the footsteps of masters like Kurosawa, Gosha and more recently, Takeshi Kitano, Miike turns his hand to the period samurai epic, the much-beloved, much-abused genre known to the Japanese as chanbara.

Set across a handful of small, rural towns in Feudal Japan in the mid-nineteenth century, Miike opens his story by detailing the horrific crimes of Lord Naritsugu (Goro Inagaki) as he travels the countryside with a platoon of bodyguards. A psychotic sadist, Naritsugu kills and rapes without conscience, protected from punishment by being the half-brother of the Shogun. A senior government official realizes the situation will become even more disastrous when Naritsugu is tipped for high office. He must be stopped, so a trusted older samurai Shinzaemon (the legendary Koji Yakusho) is secretly hired to assassinate him.

Semi-retired and having given up his “dream of a noble death”, Shinzaemon is re-energised by the prospect of a righteous cause and gathers a crack platoon of eleven more samurai, including his star pupil Hirayama (Tsuyoshi Ihara) and his nephew Shinroukuro (Takayuki Yamada). Having trailed their target across the country, the newly-formed dirty dozen devise a plan to ambush the nobleman and his retinue as he crosses a bridge into another kingdom.

The sober, considered first half of the film is dedicated to the selection and training of this elite group with the equally painstaking last hour devoted to a breathless, hyperkinetic action sequence that follows the samurai as they pitch a running battle against a vast army twenty times their size. It is a spectacular action sequence, a non-stop succession of sword-fights and stand-offs, operatically staged and choreographed with sparing use of special effects.

From the gripping overture, which focuses on the face of a disgraced samurai as he commits seppuku, to the closing close-ups of the few survivors, Miike is more interested in exploring the character of his samurai than exploiting the blood they spill. 13 Assassins is grounded in history, both real and cinematic, but Miike sees the way of the warrior, and the code that bound them as emblematic of a brutal, dysfunctional society. His noble samurai, sworn to die, inhabit a corrupt world that thrives on violence and death and they know it. In Miike’s mind, there is nothing honourable about the mindless adherence to a code of loyalty, especially if it means protecting evil people who do not deserve it. Brilliantly realised and hugely entertaining, this is swashbuckling cinema of a high order.

The industrious Miike, who has directed more than 70 films since 1990, has already completed his follow-up film. Hara-Kiri: Death of a Samurai screened in competition at this month’s Cannes film festival, in 3D.
Posted by John Maguire No comments: 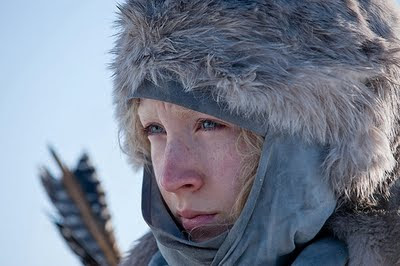 The film opens with a series of beautifully composed sequences set in the remote forest 60 kilometres below the Arctic Circle as Ronan’s Hanna silently hunts a reindeer with her bow and arrow. The teenage girl lives with her former CIA agent father Erik (Eric Bana) in a wooden hut, cut off from the rest of the world. There, he trains his daughter to be a killer, knowing that when she does return to civilisation, his enemies in the intelligence community will be coming after her. Under his guidance, Hanna has become expert in weapons, hand-to-hand fighting and stealth. He has taught her to speak a dozen languages but almost everything she knows about the world has come from a tattered encyclopaedia or a book of Grimm’s fairy tales and Hanna is hungry for more.

No sooner does she get her wish and announce her presence to the world, than an American military squad captures her and places her in a seemingly impregnable underground compound. There she awaits the arrival of wolfish CIA agent Marissa (Cate Blanchett), who holds the key to Hanna discovering her true identity and why she is the way she is. When Hanna escapes, and makes her way to Southern Spain with a family of holidaymakers, Marissa makes her pursuit,

What saves the film from going toe-to-toe with Zack Snyder’s glass-jawed Sucker Punch is Ronan’s certain performance, convincingly dangerous and, with her pale face and bleached eyebrows, unnervingly otherworldly. She might be called upon to say and do some odd things, but she rarely misses her footing, injecting her character with a potent combination of mystery, vulnerability and menace. Ronan’s thousand-yard stare is deeply disquieting; her big, blue pools suggesting either deep thought or dangerous detachment. Bana is tough and tender as the father, even if his abilities tip over into to the realms of the superhuman when his character swims across what seems to be the Arctic Sea in a two-piece suit. Blanchett’s evil agent makes for a threatening presence initially but is hampered with a character that is never more than a collection of bad-guy mannerisms and tics, adopting a Southern accent that stretches every vowel into an elongated threat. There’s also a deeply curious turn from Tom Hollander as a sadistic German mercenary charged with pursuing Hanna across mainland Europe, while whistling a jaunty tune.

Plausibility aside, the problem with Hanna is that it just isn’t exciting to watch. Wright throws his camera around with customary abandon but to little avail. His specially-commissioned soundtrack from The Chemical Brothers is all very energetic but Wright makes the MTV mistake of editing his action scenes to the flurrying music, rather than have the score underline and complement his images. The result is a swirl of camera juggling tricks (including Wright’s trademark 360 degree merry-go-round), blinking lights and juddering jump-cuts that together, give merely an impression of style. Technically, it’s well composed and carefully considered, but none of the director’s swoops and swirls add anything to how we feel about the characters or the story. The conclusion is that these things don’t matter as much and that’s a shame.

As Hanna makes her way out into the world, the people she comes into contact with seem less real than the pictures in her book of fairytales. This is as true for the good people, like the squabbling family of tourists headed by Olivia Williams and Jason Flemyng that Hannah stows away with, as it is for the bad people, like Blanchett’s narrow-eyed villain and Hollander’s lip-smacking killer. As the story winds down to an inevitable series of stand offs and confrontations, Wright’s efforts to make an action movie from a bedtime story become increasingly strained, relying on cliché and clanging symbolism to carry him over the finish line.
Posted by John Maguire No comments: 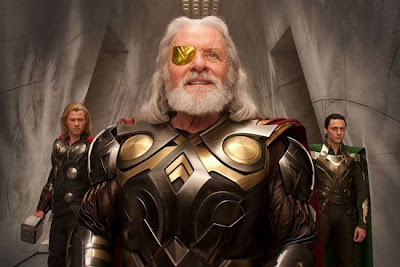 Another summer season begins with another blockbuster adaptation of a Marvel comic book and the launch of yet another superhero franchise. First published in 1962, Stan Lee’s comic book about the Norse god Thor never quite matched the success of his illustrious comrades, Spider-Man and Iron Man. Nevertheless, the mid-year marketplace requires a constant supply of new material, so the hammer-wielding behemoth has been given a complicated origin story, a cast of star actors and a shiny 3D veneer.

From there, the story ships back and forth beween Earth and the realm of Asgard, where Thor’s father Odin (Anthony Hopkins), fills in aeons of back story in growling, kingly voiceover. On the day Thor is set to ascend to Odin’s throne, ahead of his brother Loki (Tom Hiddleston), the impetuous young prince picks a fight with Asgard’s mortal enemies The Frost Giants, led by the sneering Laufey (Colm Feore). When Odin intervenes to stop a war breaking out, the burly god of thunder throws a noisy tantrum and is punished for it.

Stripped of his super-powers and banished to Earth Thor must find his magical hammer Mjolnir, make nice with the toothsome Jane, reconcile with his father and battle the investigating government and an all-powerful metal contraption known as The Destroyer before he can reclaim his rightful place in Asgard.

If Thor sounds busy, that’s because it is, breathlessly so. The constant shifts between the earthly and celestial realms make for a lot of unnecessary repetitions, as the differences between worlds are repeatedly reinforced. Thor proves a deeply unlikeable protagonist for most of the story, partly because the character is bellicose and brattish but partly because Hemsworth is a bit of a ham. The arrogant warrior’s conversion to burnished hero, central to the plot, is unconvincingly swift and simplistically played. Thor at least has the benefit of having his name over the door; his supporting players including Renee Russo as Queen Frigga, Idris Elba as gatekeeper Heimdall and an entire quintet of loyal soldiers are either clumsily introduced or remain anonymous.

The action brightens when Thor arrives in the sunny New Mexican desert, but what faces him is a series of anti-climactic fight scenes, more inter-dimensional pinball and lots of time spent establishing a sequel. With the focus on eye-popping visuals, the romance between the superhero and Portman’s goofy scientist is not given the time or space to develop, their supposed attraction limited to significant glances in crowded rooms and cute aphorisms yelled across exploding streets.

Complain all you want about 3D, it’s like Canute railing against the pounding surf. When employed correctly the technology brings something new and immersive to the cinema experience but Thor was not filmed in 3D, the effect was added later in post-production. The result is muddy, under-lit photography, juddering camera movement and over-processed special effects. Ultimately, audiences respond to stories and performances, not stuff flying indiscriminately at their heads.

Perhaps the sole surprise in Thor is that it was directed by Kenneth Branagh. The Shakespearean specialist knows his way around an epic tale but he is unable to invest the quieter passages with any weight and the results are a uneven mix of special effects fireworks and dramatic damp squibs. When a $150 million 3D blockbuster calls to mind the wobbly pantomime of Mike Hodge’s 1980s kitsch-fest Flash Gordon, someone is bound to get hammered.