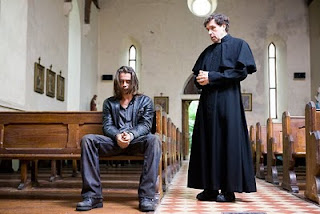 Neil Jordan’s first original screenplay in a decade sees him return to Ireland for a gentle, unassuming fable about family, faith and love. Ondine’s lyrical title derives from German folklorist Friedrich de la Motte Fouqué’s 1811 novella Undine, where a water-nymph bewitches a Saxon knight. The story has formed the basis for dozens of films, including another beautifully photographed Irish-set fairy-tale, The Secret of Roan Inish, which John Sayles and cinematographer Haskell Wexler made in and around Rosbeg in Donegal in 1994. Although that film was a bit of an oddity for the passionately political Sayles, you can’t say the same about Jordan, who has always shown a fascination with fairy-tales and fantasies; alternate worlds where alternate things happen.

Syraceuse (Colin Farrell) is a fisherman who operates a boat out of a harbour on the Cork coast. Once married to the shrewish Maura (Dervla Kirwan), he has given up the drink and devoted himself to looking after their sweet young daughter Anna (Alison Barry), who is on kidney dialysis and uses a wheelchair to get around. One day, while trawling the green waters, Syraceuse finds a beautiful woman (Alicja Bachleda) half-drowned in his nets. When she is revived, she explains she has no memory of who she is, or what happened to her. Syraceuse puts her up in an old cottage and promises to keep her presence a secret. But his daughter discovers the woman, now called Ondine, and believes she is a selkie; a mythical mermaid who looks human and can walk on land but who belongs to the sea.

Ondine is a strange girl, and strange things happen when she is around. Syraceuse had been struggling to land a catch but when she sings a song from his deck, the fish jump into the nets. Later, her presence seems to have a curative effect on Anna, who has been waiting for a kidney transplant. Could Ondine really be a magical being, come to land to find love and bring good luck? Meanwhile, Syraceuse is struggling with his sobriety, regularly attending confessions with the local priest (Stephen Rea) in lieu of an Alcoholics Anonymous meeting.

Farrell has emerged from his shallow Hollywood period as a decent actor. He struggles with the sing-song strangulations of the Cork accent (sounding at times like he is laughing and choking in the same breath) but beyond that, this is a mature, involving performance. He plays Syraceuse in a minor-key, resolutely understating the potentially unwieldy sweep of his character and searching out moments of intimacy and empathy. Opposite him, Bachleda is well cast as the tattered waif Ondine, almost silent for the most part but communicating an ethereal presence throughout.

The middle section of the film, a collection of deliberate distractions and odd character moments, is almost entirely horizontal. It’s as if Jordan is treading water, waiting for the right moment to bring his finely-spun elements together. But he delays too long, the story drags and his characters wilt. The twisted knots of the plot are not nearly as complicated, sinister or compelling as they might have been. Whatever elusive magic the story contained dribbles away. Indeed, audiences might entertain themselves during the late-stage longeurs in trying to guess how this fantastical story will resolve itself in the real world. There are few options and Jordan picks the obvious one.

The story might be bumpy and the dialogue uneven, but Jordan is immensely skilled in creating mood. Ondine is, simply, a beautiful film to look at. Australian cinematographer Christopher Doyle’s lush, hazy images are underlined by a haunting score from Kjartan Sveinsson, the keyboardist in Icelandic band Sigur Ros.
Posted by John Maguire No comments: 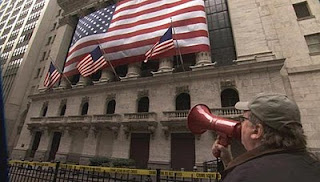 Capitalism: A Love Story is director Michael Moore’s call-to-arms against the robber barons that have brought America to its knees, a mix of comedy, outrage, economic theory and shock tactics fashioned into an effective, and entertaining, documentary about how the American Dream went sour.

Moore’s thesis is that democracy was corrupted to allow capitalism to prosper. It started with Ronald Regan dismantling the American unions, undermining the workers to increase profits. It continued with the deregulation of the financial services sector, which allowed sub-prime mortgages to evolve, massive debts incurred by people who could never hope to repay them. According to Moore, the simple dreams of the post-war generation – a house, a car, an education – have been perverted by greed, corruption and aspirant popular entertainment into demands for mansions, limousines and easy celebrity. “Capitalism is evil”, he declaims, “and you cannot regulate evil”.

Moore’s populist, rabble-rousing persona is one he adopts in order to make topical issues entertaining to Cineplex audiences. His films are all made up of the same elements: snippets of news-reel and old cartoons, startling statistics and, as always, an embarrassing stunt where Mike takes to the streets to embarrass some pompous jobsworth in a suit. This time, he attempts to make citizen’s arrests on the board of wobbling insurance giant AIG while draping yellow “crime-scene” tape on the granite edifices of Wall St brokerages.

The animations, cut-ups and montages are all very amusing, but as before, it’s Moore’s new reportage that works best. He interviews families in mortgage arrears as the banks foreclose, his camera watching as the police arrive at the door to carry out an eviction. Later, he meets with community groups and union leaders who are forcibly re-housing homeless families to save their neighbourhoods, or staging sit-ins in order to receive their rightful redundancy payments. Moore knows that the human face of any story is the most effective.

The director is outraged that the American banks, with the support of the police, can throw people out of their homes or their jobs without negotiation. Moore returns to his home town of Flint, Michigan, which has deteriorated even further since he made his first film, Roger & Me, there twenty years ago. The place is a ghost town now, filled with empty spaces where there used to be a city. In the film’s most touching moment, Moore accompanies his elderly father on a visit to the site of the factory he used to work at, a flattened wasteland of concrete rubble and twisted steel where a massive industrial plant once stood. The film isn’t an attack on corruption, stupidity, greed and bad governance, but an attempt to discredit capitalism as a social system. According to Moore, Westerners are blinded by the notion that capitalism is the same as democracy. That making money is God’s work and good work, that progress is the nature of things, that we must make new stuff to replace old stuff in a constant flux of consumption.

But what Moore fails to realise, or come to terms with, the fact that American capitalism is no longer about massive industrial plant, armies of workers and manufacturing for export. The complications of the modern money systems are beyond him (as they are beyond me), so all he can offer is a baffled shrug at the complexities of a mutated system. Moore is a fine pathologist, but he can’t offer any prognosis. He can identify what is sick about the American economy, but cannot say what will cure it.
Posted by John Maguire No comments: 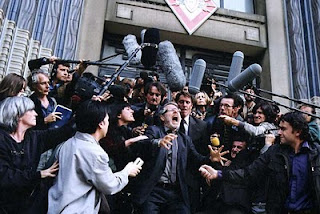 Amelie director Jean-Pierre Jeunet’s new film Micmacs is an entertaining and inventive caper about the international arms trade told with the director’s signature visual flair. Opening with a bang, the first section races through the early life of Bazil (Danny Boon), whose solider father is killed by a landmine in Algeria. His distraught mother is taken away by the men in white coats, and young Bazil ends up in an orphanage. Years later, he’s working as a video-shop clerk when a stray bullet from a gangland shooting ends up lodged in his brain.

Out of hospital, broke and homeless, Bazil falls in with a group of eccentric misfits, the Micmacs of the title, who live in a cocoon of recycled rubbish on the outskirts of Paris. The gang is led by the maternal Tambouille (Yolande Moreau) and includes numbers genius Calculette (Marie-Julie Baup), human cannonball Fracasse (Jeunet regular Dominique Pinon) and contortionist Caoutchouc (Julie Ferrier).

One day, while diving through a skip for fresh junk, Bazil notices that the two buildings on either side of the street have very familiar corporate logos. One is the firm that made the bullet in his cerebellum. The other made the landmine that did for his dear papa. Charged with a determination to put an end to both companies, he teams up with the Micmacs to pitch both company CEOs (Andre Dussolier and Nicolas Marie) against one another.

Jeunet prefers to show his audience the story, rather than have his characters explain it, so Micmacs is packed with short, snappy, almost silent sequences that, taken together, closely resemble a plot. The elaborate stings which Bazil and friends mount on the two arms dealers make up most of the film’s running time and each is more entertaining and elaborate than the last, using all of Jeunet’s considerable wit.

The execution and editing of these cinematic conceits is astonishing, as is the director’s complicated set design and hand-made props. With Boon’s mobile face and graceful movement, Micmacs is a live-action cartoon, like Buster Keaton’s take on Snow White & The Seven Dwarves, a mood further enhanced by the thunderous score taken from the archive of 1940s noir at Warner Brothers. Micmacs is a master-class in production design and visual invention, but that’s about all it is. Jeunet’s many fans will be thrilled but those seeking a deeper story, or any story at all, might be disappointed.
Posted by John Maguire 1 comment:
Newer Posts Older Posts Home
Subscribe to: Posts (Atom)