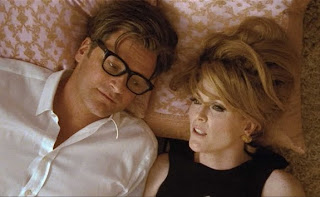 A Single Man is told from the point of view of its hero, George (Colin Firth), the single man in question. George is 52 and gay. It has been eight months since his partner Jim (Matthew Goode), died in a car accident while visiting his family, alone, in Colorado. In the house they shared together in Los Angeles, George still grieves. His work, teaching English at a local college, gives him no joy. His only friend, fellow ex-pat Charley (Julianne Moore), is a sad, lonely alcoholic who, like George, has no other friend in the world.

The film opens on what might be the last day of George’s life, in 1962. The first thing he does is check the pistol sitting in a bedside drawer, so the conclusion that he might use it at some stage is unavoidable. George is an obsessively neat man, and performs the same daily routine as he always does, setting out an immaculate suit, finding the perfect tie, polishing his already gleaming shoes. He heads off to class, where he uses a lecture on Aldous Huxley to talk about the myriad ways that humans differ from one another. His students don’t pay much attention, except the cheerful Kenny (Nicholas Hoult), who has a bright smile and handsome face and wonders if his lecturer will take drugs with him. George is tempted, but he has made his plans. And so the day unfolds in a series of careful arrangements, chance encounters and heartbreaking memories.

There’s a line of dialogue that passes almost unnoticed in a scene that acts as a touchstone for the entire film: “Sometimes awful things have their own kind of beauty”. A Single Man is directed by fashion designer Tom Ford, who made his name re-inventing Italian fashion house Gucci in the 1990s. Ford adapted Christopher Isherwood’s dark novel himself, and when no studio was willing to finance the film, paid for it out of his own pocket. The result is a fine debut, impressively photographed and composed, delicately phrased and paced.

Oscar nominated for the role, and hotly tipped to take home the statue, Colin Firth firmly puts aside memories of his Bridget Jones caricature to deliver a performance of astonishing restraint and emotional grace. Unable to reveal his true nature, George has lived his life from behind a mask, assuming an identity that, after decades, is finally starting to chafe. His tasteful furnishings, perfect clothes and gentlemanly demeanour have replaced his real self, with Ford emphasising the cool, coldly flawless world he has built around himself; his pristine house filled with tasteful furniture, his spotless car and down to the clinically white handkerchief George wears in his lapel pocket. The film belongs to Firth, who turns this sad character study into a tender, universal story of heartache and loss.
Posted by John Maguire 1 comment: 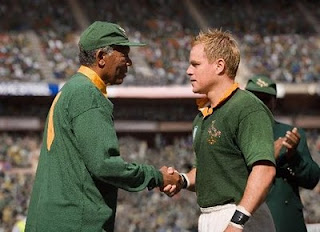 Invictus opens with a prologue taken from the day, five years previously, when Mandela was released from Robbin Island prison after 27 years in jail. Now elected president, and beset on all sides by racial, economic and diplomatic problems, Mandela is casting around for a symbol of the new South Africa. He finds it in Pienaar’s rugby team, long ostracised from international sport, which not only play host to the world’s players, but have a slim chance of winning. Mandela’s support for the Springboks is not without controversy. They are a predominantly white team, with just one black player. They wear the green and gold, the same colours as the flag of the apartheid South Africa, and they play rugby, the white sport of privilege.

Telling a vast national story in under two hours requires judicious editing but Eastwood’s narrative contractions and compressions are occasionally jarringly clumsy. Mandela’s estranged wife Winnie is never seen and is represented by a broken beaded bracelet, a symbol of their broken marriage. A series of flashbacks to Mandela’s time in prison, brought about by Pienaar and the team visiting the island, come across as overly poetic and corny. Eastwood also turns Mandela’s security team, made up of black ANC members and white former Special Branch officers, into a co-operative melting-pot emblematic of the new society. These sequences, although earnestly played, come off as trite and underdeveloped, shoehorned into the wider narrative in an effort to provide an emotional background.

There are times in the middle section of the film when the momentum slows down to a lumbering trot; lengthy re-stagings of key moments in the tournament mirrored by equally ponderous political machinations taking place backstage. Far too much time is devoted to bloodless recreations of tackles, tries and drop goals, cut between endless shots of the multi-cultural crowd waving rainbow flags.

Even if you don’t know the difference between a ruck and a maul, Eastwood’s film closely follows the set trajectory of the triumphal sports movie, even down to the final being settled on the last kick of the ball. Given such a predictable outcome, is Invictus a story worth telling? When Freeman is on screen, it is. Like the man he plays, Freeman exudes charisma and gravitas in equal measure. He has captured Mandela’s stiff stance and the awkward cadences of his speech perfectly, but to his enormous credit, the performance is more an inhabitation than an impersonation.
Posted by John Maguire 2 comments: 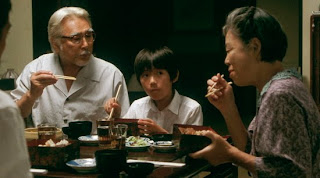 Hirokazu Kore-eda’s unassuming Japanese family drama Still Walking opens, like so many Asian films, with images of food being prepared. A lavish meal is assembled in a small kitchen by the elderly Tosiko (Kirin Kiki) and her young daughter Chinami (the monosyllabically named Japanese cult actress You). They are getting ready to host their son Ryota (Hiroshi Abe), his sweet new wife Yukari (Yui Natsukawa) and her young son Atsushi (Shohei Tanaka), the first time he has visited since he got married. Rightly or wrongly, Ryota believes his taciturn father Kyohei (Yoshio Harada), a retired doctor, disapproves of his marriage to a widowed mother and despairs of his chances to find a career as an art restorer.

At the same time, Chinami and her dopey, always-smiling salesman husband are hoping to move into the spare room, a proposal that her mother finds less than appealing. She is settled in her ways, tending to her husband and their garden. The already tense family gathering is made more uncomfortable by falling around the anniversary of the death of the family’s eldest son Junpei, a doctor like his father, who drowned while saving another man’s life a couple of years before. Junpei’s absence haunts the film like a ghost, particularly for Ryota who believes his parents would have preferred that he had been the one to die.

Like the recent Departures, Still Walking is a film about coping with grief through repetition and ritual. Some, like anointing a gravestone with water, are benign, but the other ceremonies that have built up around the tragic death are more sinister. From a cast of talented actors, Kirin Kiki stands out as the blunt and bickering grandmother. She is superb in every scene, her quick hands providing the family with delicate edible treats and her equally quick tongue providing the film with its best moment as she explains the malevolent thinking behind her façade of kindness to the boy her dead son saved. “I'm not cruel,” she tells her son, “It’s normal”.

There are moments throughout that recall the Japanese master director Yasujiro Ozu; lengthy, floor-level domestic still-lives and delicate images of the colourful garden that surrounds the house. The tone, like Ozu’s, is melancholic, tense and muted. At the heart of the film is the dining table, where the family eat, bicker, gossip and, slowly, unburden themselves. The story, which takes place over a single day and night, builds through an accretion of tiny details, oppressive silences and muttered asides, fleeting glances and fluttering gestures. Conversations begin at one point and, almost imperceptibly, conclude at another, some way distant. The root of the drama is revealed obliquely, a slow simmer of long-held grievances that never quite boils over. Restraint, in the end, wins out, but this grimly-held control only highlights the bright flashes of realistic emotion scattered all the way through what is a captivating film.
Posted by John Maguire No comments:
Newer Posts Older Posts Home
Subscribe to: Posts (Atom)