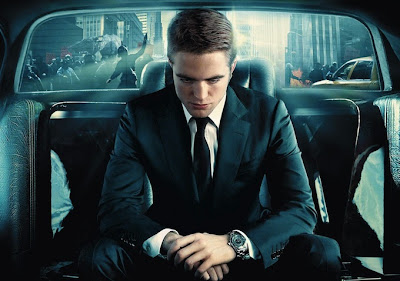 After a decade-long run of accomplished and exciting films, David Cronenberg suffers an excruciating blow-out with his stilted, stuttering adaptation of Don DeLillo’s short novel Cosmopolis, the story of a twenty-something billionaire taking a limousine ride across Manhattan. Inert, stage-bound and self-conscious, Cronenberg’s journey is not worth the destination.

Twilight star Robert Pattinson stars as Eric Packer who has accumulated vast wealth by speculating on the international currency exchanges and all before his thirtieth birthday. Self made and “raised by wolves”, Packer has built up his massively-resourced corporation to be a globe-spanning money-machine. Isolated by his fortune, he has taken to sitting in a black leather throne in his stretch limo, surrounded by the latest information technologies and cocooned behind an inch of bullet-proof glass. From this impressive perch, Packer and his young, tech-savvy cohorts practise rarefied business strategies that allow them to predict currency fluctuations based on vast amounts of data collected from any and all available sources.

As the film opens, Packer has decided on a whim to travel across Manhattan to get a haircut from his childhood barber. His bodyguard Torval (Kevin Durand), one finger constantly pressed to his earpiece, warns him about the complications presented by a presidential motorcade, an anti-capitalist protest and what he refers to as a “credible threat” against Packer’s life. To make things worse, the tycoon has made a huge bet against the Chinese Yuan and his constantly updating computer screen isn’t delivering him any good news.

Ignoring all advice, Packer gets into the car and makes his meandering way across the city, like Leopold Bloom in a very expensive suit. From time to time, people in his life arrive at the car to have hollow, didactic conversations about nothing in particular. His snooty wife (Sarah Gadon) tells him she’d rather write poetry than consummate their marriage. His art-dealer (Juliette Binoche) tells him about a fabulously expensive Rothko painting that has just come on the market, while his financial guru (Samantha Morton) delivers an incomprehensible lecture about “the narrative quality of money”. His doctor arrives and, in the film’s sole attempt at humour, gives the billionaire a prostate examination as his head of computer security watches, aghast. Meanwhile, Packer’s car gets caught up in the simmering anti-capitalist protests on the city streets, which will eventually spill over into a tepid, tired-looking riot.

In Pattinson’s hands, the po-faced, frozen financier is really not a character you’d want to spend an hour and a half trapped in a car with, regardless of how plush the upholstery. Blandly handsome and wearily dull, the actor doesn’t help matters by being as wooden as a garden fence, delivering his convoluted dialogue in a tuneless monotone, complete with long sighs and pouted sneers. Like the film itself, there is nothing going on under the surface. The late arrival of Paul Giamatti as a half-crazed would-be assassin ups the ante on the non-stop chatter as Pattinson’s quest devolves into a twenty-minute snippet from a one-act play. The two characters bounce around an overdressed set, yapping interminably about inequality and injustice. Or at least, I think that’s what they’re talking about. By this point, Cronenberg’s dialogue has collapsed into a tedious, airless jumble of barely-connected words that escape coherence or meaning.

Adapting DeLillo’s 2003 novel himself (his first screenplay credit since 1999s Existenz) Cronenberg’s script comes off as an over-considered lecture on the amoral excesses of corporate America. Among all the jargon and double-speak, there is no perceptible anger. The director stages a riot, in which a man sets himself on fire in the manner of a Buddhist monk, and the scene has all the energy and impact of a sputtering candle on a birthday cake. Intended as a denunciation of the elite one per cent, this vapid, strained drama offers nothing but shiny emptiness.
Posted by John Maguire No comments: 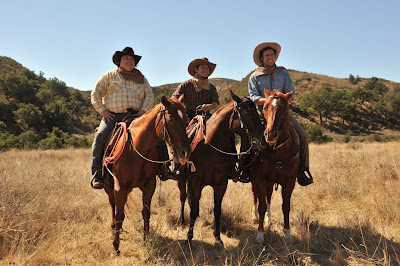 A joke that has to be explained isn’t really a joke at all. You get it or you don’t. Things that are kind-of funny are also kind-of not funny while stories that start out funny don’t always end up that way.

For his new comedy, Will Ferrell spoofs the peculiarly Mexican soap-opera known as the telenovela, supersaturated serial melodramas in which moustachioed men strut about in tight pants while scheming women heave their bosoms and throw random dagger-eyes. A particularly Mexican celebration of sex, death, glitz and trash (and watched by millions) the format hasn’t travelled to this side of the Atlantic. And neither does Casa de mi Padre, although unfamiliarity is only part of the reason why Ferrell’s parody is a dud. Stilted, choppy, weird and woefully short on laughs, what might have been a riotous eight-minute skit in a sketch show – or a viral sensation on Ferrell’s own Funny or Die website - feels horribly overextended at feature length.

Wide-eyed and innocent farmhand Armando Alvarez (Ferrell, speaking fluent Spanish) is the second son of a dairy rancher (the late Mexican actor Pedro Armendáriz Jr. in his last role) who lives deep in the backcountry in a hacienda filled with coloured tiles and heavy wooden furniture. Armando, devoted to the land, couldn’t be more different to his flashy older brother Raul (Diego Luna), who left the ranch to make it big in the drug-trade in Mexico City. When their father finds himself in financial difficulty, the prodigal Raul returns in his gleaming white limousine, with his gorgeous fiancée Sonia (Genesis Rodriguez) in tow, to save the homestead. When she stands and listens to her awkward soon-to-be brother-in-law expand on his notions of the ideal woman – someone who shares his love for the soil, Mexico, cattle and cactus-flowers – Sonia realises that this curly-haired buffoon is her soul mate. But how can Armando betray his only brother? And who will protect their homestead against the ruthless rival drug lord La Onza (Gael García Bernal)?

From the flashy opening credits to the obviously painted backdrops, the film mimics the sun-faded look of old two-reel serials, with undisguised rear-projections, intentional continuity errors and stuffed toys standing in for wild animals. Furthering the illusion are skipped frames, orange bursts of overexposed film and scratch marks that recall Tarantino’s 2007 retro-exercise Grindhouse.  There’s even a moment, about half way through, where everything comes to a dead stop as the filmmakers read out an apology for the shabbiness of their special effects, blaming the chaos that resulted from an unfortunate coming together of a wild tiger and a bag of cocaine. A lot of time and effort has been spent making this pricey studio comedy look like something cobbled together on a shoestring in the 1970s, but nothing like the same level of care and attention has been paid to the script. What Casa de mi Padre lacks are funny jokes that follow, one after another, in a reasonably paced progression.

Ferrell does his usual deadpan innocent but the story only occasionally allows him to play to his strengths; child-like bemusement, simmering frustration and flights of surreal lunacy. The few times that the actor does get to let loose are, unsurprisingly, the best moments in the film, particularly an inspired moment where Armando sits with his ranchero buddies (Efren Ramirez and Adrian Martinez) at a campfire and signs a plaintive love song, pausing to clean the spit-valve on his trumpet before starting a bumptious solo. But it’s too little, too late for a film that clocks in at just 84 minutes but feels considerably longer. No mi gusta. No mi gusta one bit.
Posted by John Maguire No comments: 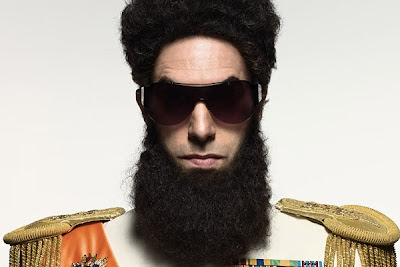 After eighty minutes or so of hit-and-miss political incorrectness, Baron-Cohen finally hits his stride in a scene where Aladeen stands before a press conference and delivers a subversive speech against dictatorships that lists, in a mercilessly detailed way, the similarities between the classic model of tyranny and the current American political landscape. It is a moment of real wit and invention that has the effect of making what has gone before seem even cheaper and shabbier.
Posted by John Maguire No comments:
Newer Posts Older Posts Home
Subscribe to: Posts (Atom)