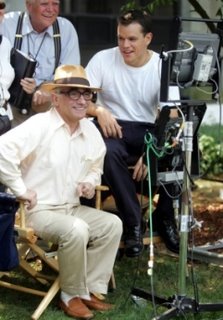 I sat down the other day to compile my 'best of' list for the newly minted Dublin Film Critics Circle (more about that in a few weeks) and found myself surprised at how many really excellent films I saw in 2006.

There are about 250 movies released in Irish cinemas every year. Its interesting, to me at least, that I can confidently mark 10% or so of them as being well worth watching and well-nigh essential if you consider yourself conversant with the modern cinema. Just as interesting, about 10% of that annual slate are unmitigated rubbish, leaving the majority of films in the mediocre category - that may have proved popular, like Superman Returns, Casino Royale, The Queen or World Trade Centre, but are flawed for a variety of reasons. I really enjoyed watching Superman and gave it a glowing review at the time, but the film passed from memory too quickly and my opinions on it have changed very slightly. My opinions have hardened on Casino Royale, but to a much greater extent. WTC was too bland to consider re-considering.

But the point is this. 25 movies of a standard as good as any year in the recent history of the medium is a decent rate of return for the regular cinemagoer. There are at least another 25 that won't leave you feeling disappointed, exactly. If you picked the shit 25 (to which I could add another 25 if I was feeling particularly bilious) well that's just tough.

The Departed was, for me, the most consistently entertaining and exciting film I saw this year. I am a Scorsese fan (as opposed to fanatic) but was electrified by the angular story, the gritty performances and the blank, dark tone. It's the only film this year that I went out to watch again in the cinema. So thats tops, but the remainder of the must-see list are presented in no particular order.
Best Films of 2006

The New World - utterly transfixing, made me aware of changes in my breathing.

The Squid & The Whale

The Wind That Shakes The Barley - after The Departed, the film most people talked with me about this year

The Three Burials of Melquiandes Estrada

Red Road - the ending was disappointing, but what went before was excellent

One title jumps out unchallenged when selecting the worst film of the year, Martin Lawrence's unrequested reprisal of his obscene 'family' clown, the monstrous insult Big Momma's House 2. I hate that unfunny prick and his sub-normal caricature of entertainment. The remainder of the 'worst of' list should be considered, like finding a head on a stick during a jungle stroll, a warning not to proceed.
Worst Films of 2006

The Tiger’s Tale - the right things, said in the wrongest possible way

Tenacious D In The Pick Of Destiny

A Good Year - Crowe at his most crass

All The King’s Men

The Lady In The Water - humourless, odd, rambling junk

Beerfest - not a single funny moment

When A Stranger Calls

Rent - distilled from the tears of unicorns

The Lake House - sloppy and soppy

Rather than leave you with the thoughts of Keanu slobbering over Sandra like a stoned bloodhound eating a packet of Opal Fruits, the best film book I read this year was Patrick McGilligan's A Life In Darkness & Light (even if it was published in 2003) and the best song I heard was Mississippi Fred McDowell's [wiki] 61 Highway, which is of far earlier vintage.

Man, I have to think about contemporising in 2007.
Posted by John Maguire 3 comments: 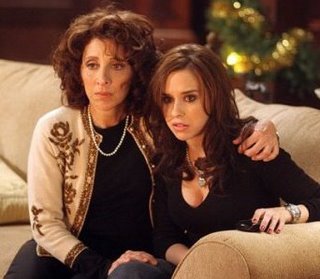 The awful Black Christmas represents yet another remake of a supposed cult classic horror, culled from the seemingly endless supply of 1970s slasher pictures by grubbing studios desperate to mine the last nuggets of revenue from a long exhausted seam. What this movie (like Texas Chainsaw Massacre, The Fog and The Hills Have Eyes remakes before it) illuminate is the true depth of Hollywood’s creative crisis; lazy, uncaring product spewed without care or craft into the eager Cineplex supply line and an example of audiences being fed leftover turkey before the Christmas.

The original 1974 film, which starred a pre-Superman Margot Kidder and a post-2001 Kier Dullea, was an efficient gore-fest by the standards of the time but clunky and almost comic today. It was directed by the hack Bob Clarke, who later made an about-face with the very cute adaptation of Jean Shepherd’s A Christmas Story, but also made Karate Dog and Baby Geniuses 2, so it’s not like they’ll be opening film schools in his name anytime soon. The original movie teetered on the sole, subversive contrast between Peace on Earth and pieces of sexually precocious teenage girls. Nobody remembers it now, which might offer this shabby remake a snowballs chance at the box office, but I doubt it. As regurgitated by Final Destination producer turned director Glen Morgan, Black Christmas is a cretinous procession of sub-pantomime acting, illiterate dialogue and larcenous plotting, scattered throughout with scenes of torture, titillation and tacky gore. While I can never approve the former, I am generally in favour of the latter, especially in the context of an entertaining horror story. That is not found here.

The major difference between the two films, original and remake, is that this time out the psycho loses his anonymity and has an elaborate back story grafted onto his demented shoulders. After that shabby set-up, we cut to present day where the killer’s childhood home has been converted into a sorority house, a university dormitory that houses a gang of eight bitchy young women; Kellies and Megans and a couple of, like, Heathers. Barring internet floozies du jour Lacey Chabert and Michelle Trachtenberg, the cast are anonymous, but collectively they display all the life and humanity of a cutlery drawer. Their middle-aged minder Mrs Mac (Andrea Martin), tells them the legend of Billy (played by Robert Mann making his debut and, with any luck, taking his bow), while gathered to exchange grudging Christmas gifts. Soon, one of them turns up dead, with the cast of suspects including the aforementioned killer, a sleazy amateur pornographer boyfriend and the hilariously miscast ‘big sister’ of one of the teens, played by the director’s 40 year old wife.

Bonkers Billy stalks the skimpily dressed robots throughout the labyrinthine house, making noisy, threatening telephone calls and then picking the victims off, one by one, in a series of increasingly tawdry murders. Throats are slashed, eyeballs are plucked out and buckets of blood are splashed over Christmas decorations, while out in the cheap seats, yawns are stifled and watches are checked. The film is nigh on unwatchable. Word is that the studio Dimension enforced script changes and demanded an alternate ending, in effect taking the film away from Morgan, but the director doesn’t otherwise hint that there was anything here before the interference. He creates no atmosphere, no sense of dread or suspense and relies on the outward thrust of his cast’s cleavage and the staccato beat of his cheap shock moments, with the only scare being the speed at which both of fall victim to the laws of diminishing returns. 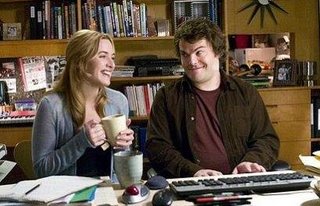 A horribly contrived and echoingly empty confluence of ‘Christmas movie’ and ‘chick flick’, The Holiday marks the return of What Women Want and Something’s Gotta Give writer and director, former studio executive Nancy Meyers; a lady who knows more about demographics than she does cinema and who, it would appear, is immune to voodoo. It’s either that or I haven’t been sticking the pins in far enough.

A series of short vignettes introduce us to the four main characters. Amanda (Cameron Diaz) owns a Los Angeles company making movie trailers and has recently broken up with her two-timing boyfriend (Ed Burns, briefly). On the other side of the Atlantic we meet lovelorn London journalist Iris (Kate Winslet), finally getting over her unrequited love, the caddish Jasper (Rufus Sewell). It’s Christmas, and neither woman can face being alone, so they decide, during the course of a quick internet exchange, to swap houses for two weeks. Now, you’ll stop me there. Isn’t that Tara Road? Yes, it is.

Enter the men, Jude Law and Jack Black; a singleton London book editor and a piano-playing soundtrack composer respectively. The unholy coming together of the two couples is arranged in a series of ‘meet cutes’. Meyers later wheels out the great Eli Wallach as an elderly Hollywood writer, to explain what she means, and have a pop at the current state of studio cinema while he’s at it. There’s a heartbreaking irony in this turn of events. Wallach’s character makes a tear-jerking speech at a Writers Guild of America function arranged in his honour, the same Guild that met in arbitration to discuss the authorship of The Holiday. The WGA eventually gave the credit to Meyers, although both Maeve Binchy and Helen Fielding’s names must have come up at some stage.

Diaz, who is lovely to look at, is insufferable to watch; playing a dizzy, air-headed blonde without a screed of plausibility, shrill and clumsy and wooden. Her disastrous performance aside, the chatter she is asked to express is choice. Detailing her urgent need for a vacation she trills the line, “I want to eat carbs without wanting to kill myself”. If you are the kind of woman to whom this magazine-article line rings true, you really need to talk to somebody. Winslet comes out the better of the two female leads, but there’s only a hair between them. She bears the contrivances well enough, and certainly perks up later on, but it is sad to see such talent wasted. Jude Law plays Jude Law, but with extra mischievous twinkle and later, a whole heap of blubbing pathos. He has never been more irritating. Jack Black, whose appearance as a romantic lead initially gives hope to something out of the ordinary, ruins it by doing that terrible improvised singing thing he does. By the third time he opened his gurning yap, pap-skip-skap-skoodly-doo, I was half way out of my seat, until some greater power, call it a sense of duty or ingrained masochism, forced me to stay put.

The film’s pretence that it shares a heritage with the classic Hollywood screwball comedies of the Golden Age is as inappropriate as it is desperate. Meyer’s approach to sparkling wordplay is to have one character jabber on for two incomprehensible minutes, then have the other character say something pithy, like ‘Exactly!” Failing that, there’s always a reaction shot from a dog. It is pure drivel. The director’s plotting is even less sophisticated, with every well-forecasted, painstakingly arranged plot point driven home as if at the head of a sledgehammer. Deathly bland and false, The Holiday is as bad a film as I have seen all year. Whether it works as a romance or not is a matter of individual taste, but it cannot be a comedy unless it contains jokes. Actual gags, not the exhausted Black or the dippy Diaz routine. A special mention is reserved for Hans Zimmer’s outrageously syrupy score, a constant meander of plinking piano designed to reinforce emotions the cast are simply unable to muster themselves. Like everything else on display, it is nauseating.
Posted by John Maguire 2 comments:
Newer Posts Older Posts Home
Subscribe to: Posts (Atom)