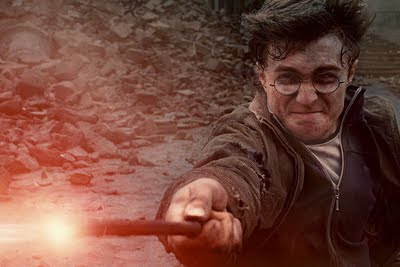 All’s well that ends well. After eight films in ten years and cumulative box-office returns of more than $6 billion, the Harry Potter franchise comes to a rousing conclusion in The Deathly Hallows Part II.

Having inherited the series from originator Chris Columbus and predecessors Alfonso Cuaron and Mike Newell, continuing director David Yates and screenwriter Steve Kloves have combined to bring a brisk efficiency to JK Rowling’s meandering, lumpy prose; trimming the story to the bare bones and giving the drama a sturdy bedrock on which to place a series of carefully orchestrated stand-offs and set-pieces. The tone has darkened considerably over the course of the saga with the conjuring tricks of the early films maturing into a shadowy landscape where magic is an expression of an inherent emotional state, be it good or evil, white or black.

The Deathly Hallows Part II brings all those bubbling themes to a head in a final showdown between Harry (Daniel Radcliffe) and Lord Voldemort (Ralph Fiennes), an end-game that audiences have been waiting a decade to see. The film opens with the images that ended the previous installment as Voldemort lifts the all-powerful Elder Wand from its resting place in the now-dead Dumbledore’s tomb. The next thing we see is Hogwarts surrounded by a cordon of ragged wraiths as Harry, Ron (Rupert Grint) and Hermione (Emma Watson) continue their quest to find and destroy the four remaining Horcruxes (fragments of Voldemort’s soul), each successful discovery making their mortal enemy weaker in turn.

With access granted by the black-eyed goblin Griphook (Warwick Davis) to a bank vault owned by Bellatrix Lestrange (Helena Bonham Carter), the three are in sight of uncovering the last few clues. With the help of Dumbledore’s brother Aberforth (an almost unrecognisable Ciarán Hinds), they make their way back to Hogwarts where they are re-united with their old school friends, including Harry’s girlfriend Ginny (Bonnie Wright) and the now-heroic Neville Longbottom (Matthew Lewis). There, surrounded by his supporters, Harry faces-off against the slippery, sinister Snape (Alan Rickman) and Voldemort’s ever-growing army of ghouls in a seemingly-hopeless final battle for the fate of the wizarding world, and his life.

Perhaps it is the knowledge that the adventure is coming to an end but with this film Yates achieves a deeply satisfying sense of convergence, weaving together the countless thematic, dramatic and romantic themes from the past seven films, up to and including the ultimate, long-awaited comeuppance.

The Potter series has always been at the cutting edge of visual effects work, even if the balance between storytelling and spectacle hasn’t always been as finely judged as it might be. For this last installment Eduardo Serra’s brooding cinematography has been given an unrequested, rather underwhelming stereoscopic 3D conversion. The extra dimension adds a few humpbacked thrills to an early roller-coaster ride through the vaults of Gringotts’s bank and gives a greater sense of depth to the crowded spaces where Yates stages many of his scenes but the effect is, for the most part, imperceptible. The best of the effects work, and some of the most involving action in the entire series, is found in the final battle at a besieged Hogwarts. Here is a spectacle of death and destruction that plays out on a scale unlike anything else these films have attempted, the familiar halls and turrets crumbling in a tumble of stone around our heroes heads.

Having played Harry for exactly half his life, Radcliffe draws the curtain on his character with a grim-set sense of destiny, achieving the catharsis that, at times, threatened to remain forever beyond his talent. Although Grint and Watson are given ample screen-time they are essentially passengers in this section of the story, their long-awaited clinch not withstanding. Yates splices the rollicking action with valedictory cameos for the long list of British character actors who have graced the series, granting Maggie Smith, Gary Oldman, Emma Thompson, Jim Broadbent and Julie Walters a final curtain-call. Like the series itself, they go out on a high note.

Read my interview with Daniel Radcliffe and Brendan Gleeson on the set of The Order of the Phoenix here.
Posted by John Maguire No comments:

Transformers: Dark of the Moon 3D 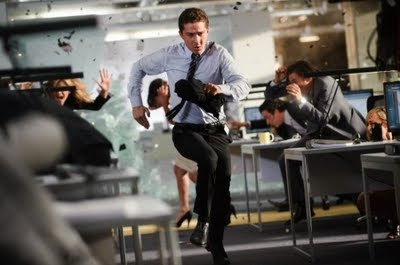 Michael Bay continues his one-man quest to blow everything up in the interminable, deafening Transformers: Dark of the Moon, the third in the ever-diminishing franchise built around robot toys from the 1980s. The best moments in the movie arrive in the first ten minutes, as Bay and his screenwriter Ehren Kruger re-jig history to land the Apollo 11 mission on the moon on a secret mission to explore a cavernous crashed alien spaceship, containing the first clue to the existence of gigantic sentient robots.

Fast forward forty years and the war between the two races of robotic aliens (the good-guy Autobots and the bad-guy Decepticons) continues, with the fate of the Earth hanging in the balance. The Autobots leader Optimus Prime (voiced by Peter Cullen) is attempting to locate fragments of an advanced technology, developed by his mentor Sentinel Prime (Leonard Nimoy), before his sworn enemy Megatron (Hugo Weaving). Despite receiving a hero’s medal from Obama, Sam Witwicky (Shia LaBeouf) has been cut adrift by the US government (personified by Frances McDormand’s clipped secret service chief). Recently graduated from college, Sam is looking for a job. In between interviews, he passes the time with his new girlfriend Carly (lingerie model Rosie Huntington-Whiteley making her debut, and with any luck, her swansong) in their incongruously ornate apartment in Washington.

In Sam’s absence, The Autobots have been enlisted into the US military, tearing off around the world to dish out mechanical justice to an assortment of swarthy-looking villains in various desert locations. While on a fact-finding mission to Chernobyl, for some reason, Optimus Prime and his human handler Lennox (Josh Duhamel) are ambushed by an enormous robotic hydra, inspired by David Lynch’s sandworms from Dune. Back in the US, everyone with information about NASA’s co-operation with the Autobots are being assassinated by a bird-like robot with the ability to transform into everyday objects. Eventually, and by that I mean about an hour into the story, the good guys start joining the dots in the conspiracy and the plot is abandoned in favour of all-out action.

The story might be nonsense but the Transformers franchise allows Bay and his army of technicians to push the envelope as far as digital image-making is concerned. Although the scores of crash-bang action sequences blend into an interchangeable accumulation of clattering cogs and grinding gears, Bay’s 3D vista allows for rare moments of grace; a flurry of moon dust or a tumble of scarlet sparks spreading across the screen, each falling mote distinguishable from its neighbour. The real trouble is that Bay doesn’t know when to stop and what’s more, the director still hasn’t learned that epic action sequences and flashy effects don’t make up for a dire script and woeful performances. Watching the film, there’s the distinct impression that Bay would be happier if he didn’t have to include human actors at all, allowing him to play with his robotic toys in peace.

Thematically, Bay’s already undemanding story has been further simplified into the broadly drawn strokes of an all-action war film, with the good guys and the bad guys squaring off against one another in an hour-long climax set amongst the ruins of a destroyed Chicago. Aside from some deeply unamusing comedy business, there is no room for character development or plot beyond an endless series of high-octane explosions, clattering mechanical battles and lingering soft-core titillation. As such, the third, and hopefully last, iteration of this soulless franchise matches the template of the first two films; an hour of blinding pyrotechnics interspersed with indistinguishable shiny objects smashing into each other while their human counterparts run about shouting.

Transformers: Dark Of The Moon is better than Transformers: Revenge Of The Fallen but that’s like your doctor telling you he can’t save your life, but he found your wallet. A small mercy indeed. After three films (this one running for more than two and a half hours) metal fatigue has set in.

You can read my interview with Michael Bay for the first Transformers film here
Posted by John Maguire No comments: 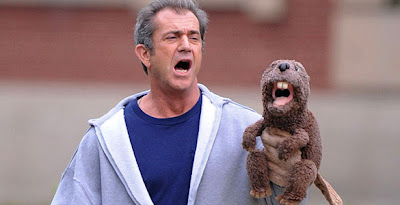 Jodie Foster’s odd comedy drama The Beaver arrives tainted by the reek of scandal and opprobrium. Knowing what we know about star Mel Gibson's real-life character (or at least the version reported in the tabloids) it’s difficult to cheer him on as his Walter Black suffers through a prolonged psychiatric collapse with the help of a furry brown hand-puppet.

Foster’s third film as a director (and her first since 1995s family drama Home For The Holidays) The Beaver opens as Gibson’s floundering toy-executive Walter falls headlong into a black pit of depression. His clenched wife Meredith (Foster) has had enough of Walter’s soul-devouring despair and kicked him out of the home they share with their two sons. While filling his car boot with bottles of booze, Walter discovers the eponymous puppet in a carpark skip and takes it with him. When later, following a series of slapstick suicide attempts, he wakes up in a hotel room he finds the puppet stuck to his arm, talking to him in a voice that sounds like Ray Winstone gargling with broken glass.

From that point on, the scraggy brown puppet is never off Walter’s hand, creating a buffer between the flailing man and the people around him. He finds that this self-cure puppetry offers him a respite from his despair, allowing him to break old bonds and form new ones, with his young son (Riley Thomas Stewart), his desperate wife Meredith (Foster herself) and his employees at his failing company. The only person who cannot accept the beaver is Walter’s estranged eldest son Porter (Anton Yelchin), a high-school student who has developed a lucrative side-line in writing other student’s exam papers. Porter is worried that he will inherit his father’s depression, until a blossoming romance with graffiti artist turned cheerleader Norah (Jennifer Lawrence) offers a chink of light.

If The Beaver sounds impossibly cluttered and implausible, that’s because it is. Under Foster’s austere direction, Kyle Killen’s script (originally an out-and-out comedy vehicle for Steve Carell), becomes a rather weighty fable about the Western world’s overreliance on happy pills, self-help books and mid-life collapse. But traces of the Killen’s comic intentions remain, riddling the story with contrivances and distractions which, over time, go to undermine the more serious truths that Foster is attempting to uncover. It doesn't help that everyone has an occupation that acts as a signpost to their character. Walter the toy-builder is reconstructed by a toy, his topsy-turvy wife designs roller-coasters, his eldest son is so afraid of who he really is, he specialises in writing his illicit essays in an exact match to the buyer's writing style.

Carrying echoes of James Stewart’s dipso imaginary-friend Harvey and Craig Gillespie’s melancholy sex-doll allegory Lars & The Real Girl, The Beaver is a decidedly odd film but at its heart it is interesting, something rare enough during the blockbuster summer season. Not funny enough to be a comedy and lacking as a drama, Gibson himself is still the biggest obstacle standing between the film and a wider audience. But his performance is also the main reason why anyone should go see it: here is a man plagued by ugly demons playing a man plagued by ugly demons, delivering a dark, strange performance that very few actors would have the courage or skill to pull off.
Posted by John Maguire No comments:
Newer Posts Older Posts Home
Subscribe to: Posts (Atom)