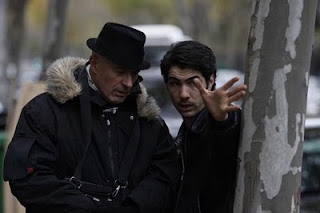 2010 comes to a close with the traditional "Best & Worst" list. I have listed my favourites in no particular order here, but if I must pick one above all the others, it would be the sublime French prison drama A Prophet. Jacques Audiard’s powerhouse saga of how a young criminal works his way up the pecking order in a tough prison had me gripped from start to finish. As has become the barometer of these things, over the years, it is the only film I watched again in a cinema after seeing it at a press screening.

The rest of the Best:

Uncle Boonmee Who Can Recall His Past Lives
(Apichatpong Weerasethakul, Thailand)
Spellbinding and mystifying in equal measure, Apichatpong continues to invent new forms of narrative cinema.

Mother
(Bong Joon-ho, South Korea)
Korean director Bong’s brave and assured Oedipal thriller took brilliant characters, placed them in immersive locations and had them do fascinating things. He makes it look easy, but it really isn't.

The Secret In Their Eyes
(Juan José Campanella, Argentina)
There’s not a note missed or a breath wasted in this richly scripted, involving thriller; a gripping story of love and death centred on an unsolved crime in 1970s Buenos Aires.

The Social Network
(David Fincher, US)
Top marks to Aaron Sorkin and David Fincher for making a vital mainstream studio film from the most unlikely subjects; the internet, business ethics and the legal process. A true Geek tragedy.

His & Hers
(Ken Wardrop, Ireland)
Wardrop’s deceptively simple and beguiling documentary was a series of sweet interviews with Irish women about the men in their lives and a word-of-mouth success at the box office

Another Year
(Mike Leigh, UK)
A talented cast, made up of happy and unhappy characters, come together over the course of a year in Leigh's finely observed comedy drama.

Shutter Island (Martin Scorsese, US)
Scorsese's hallucinatory homage to the B-movies of his childhood.

Toy Story 3 (Lee Unkrich, US)
Woody and the gang wave goodbye in this funny and poignant series-ending sequel from Pixar.

Mercifully, Matthew McConaughey did not appear in a film in 2010. If he had done, it would be listed in this space.

Sex & The City II
(Michael Patrick King, US)
Carrie and her superannuated chums reprised their hymn to conspicuous consumption just at the time when the money ran out.

Leap Year
(Anand Tucker, US/Ireland)
If the economy hadn't collapsed so spectacularly, this unwatchable collection of Oirish stereotypes would have been the greatest disaster to befall this country in 2010.

Zonad
(John & Kieran Carney, Ireland)
If there was a joke here, I didn't get it, no matter how often it was repeated.

Vampires Suck
(Jason Freidberg, US)
If the Twilight franchise wasn’t anaemic enough, this lazy spoof was entirely bloodless. Proof that shooting fish in a barrel is tougher than you’d think.

The Collector
(Marcus Dunstan, US)
The last whimpers of the torture-porn movement. Nobody will miss it.

Enter The Void
(Gaspar Noe, France)
The first hour of Gaspar Noe’s psychedelic point-of-view odyssey could easily have made the “Best Of” list. If only he had stopped there.

All About Steve
(Phil Traill, US)
Sandra Bullock follows her Oscar win with a dreadfully mistimed comedy about a mentally challenged woman stalking a news cameraman. Oh, the humanity.

Takers
(John Luessenhop, US)
A flashy menswear catalogue brought to life as a forgotten episode of Miami Vice.

The best film book I read this year was Steven Bach's saga about the making of Heaven's Gate, Final Cut (even if I was a little late in getting round to it). I also really enjoyed Simon Louvish's definitive double-biography of Laurel and Hardy, Stan & Ollie: The Roots of Comedy and Ruth Barton's temperate biography of Hedy Lamarr, The Most Beautiful Woman in Film. The worst film book, by some distance, was Kevin Smith's semi-literate masturbation diary, My Boring-Ass Life which, like his recent films, is just awful. My song of the year was Wayne Smith's 'Under Mi Sleng Teng', an early-80s electro reggae track which featured on the soundtrack to Shane Meadow's tv series This Is England 86.

And that's it. Happy New Year!
Posted by John Maguire