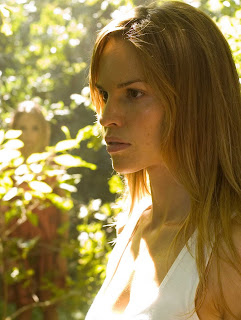 [My buddy John McKenna made the point that all the interviews I've posted on-line to date have been with male actors or directors. This 2007 interview with Hilary Swank, albeit for the tepid horror film The Reaping, is intended as a first step towards correcting that imbalance.]

As one of the primary repositories of supernatural stories in our culture, it’s not surprising that the Bible has so often provided filmmakers with their inspiration, particularly when the ancient scribes arranged the juiciest bits in neat sequences, like the mortal sins in Se7en, the splashy gore of Stigmata or the ten plagues of Egypt, a gruesome succession of afflictions which form the basis of the spooky new Hilary Swank psychological thriller The Reaping.

It’s been raining heavily for days, leading to a suitably biblical flood coursing through the narrow streets of . Although I managed to jump the deeper puddles on my way to meet with Swank, the cuffs of my pants are dripping into my shoes as I sit waiting for her to join me. No such discomfort for the actress, who wanders in wearing a floor-length grey silk gown, red carpet style, her brown hair lifted off her angular face and a discreet but very sparkly diamond in each ear. In the movie Swank plays Katherine Winter, a former Christian missionary who lost her faith after her family was killed and has since devoted herself to studying and rationally disproving religious phenomena. When she is called upon to investigate strange events in a small Southern town called Haven, where the river has turned to blood and there’s been a rain of frogs, she gets caught up in a mystery that causes her to question again her lost faith, and challenges her notions of science. The first question, the most obvious one, is she religious herself? “That is the most obvious question, isn’t it, but I have to say I’m more of a spiritual person than someone who is part of any church, you know. I was never baptised or anything like that but I do believe in a higher power.”

“I wanted to do this film because I had never read anything like it before. The script was a real page tuner, and the ending caught me by surprise, which doesn’t happen that often. When it came to sitting down with the director, Steven Hopkins, he had me read Exodus, the part of the Bible that deal with the ten plagues of because that was our inspiration, but I have never read the whole thing. I also read some of the books that are out there about those people whose job it is to travel the world and perform a scientific analysis of myths and miracles and strange phenomena. Almost every miraculous event out there has a rational explanation, so a lot of the time it’s a question of being able to make a leap of faith, to accept that there can be a rational and irrational answer. We know how the sun shines but that doesn’t make it any less amazing”.

In one of the film’s best moments, Swank’s character gives a rational and reasonable scientific explanation for each of the ten plagues and how the effects of one led on to another. “When I read that part of the script, I thought it was a really interesting monologue that gave the scientific side of a historical story and an insight into how Katherine’s mind works; how she rationalises the events around her and forms logical connections”. I mention to her that right now there’s a case of an Italian nun who believes that writing the name of the late Pope John Paul II on a scrap of paper cured her of Parkinson’s Disease. “I haven’t heard about that but I am certain that for all the people who are making the case for divine intervention, there are people working to disprove it. That’s how it goes. Before we did the movie, I read a lot of copies of a magazine called The Sceptical Enquirer, which opened my eyes to these strange and weird things in the world. I’m fascinated by those things that are outside our normal experiences and I am definitely more of a believer than a sceptic and doing this movie didn’t change my views on that. If I sit and think about where I come from, and where I am now, I’d have to believe in miracles”. She laughs but she isn’t joking.

Swank was raised in a trailer park on the outskirts of a small rural town in state, a tough upbringing that became even more difficult after her parents divorce. Although she showed promise as a gymnast, she was bitten by the acting bug early. “I knew I wanted to be since I was nine years old. I had a teacher who had us all write and perform a little skit before the class and something came alive inside of me. I loved it and even though I was very young and didn’t exactly come from a place where people could have those kind of ambitions, I knew I had found my calling, you know, the thing you are supposed to do in life”.

Years of junior theatre led to Swank and her mother moving to in the early 1990s, where they lived in their car until they could afford the rent on an apartment. Small roles in sit-coms and bit parts in movies led to a couple of months on 90210. At the end of the season, her contract wasn’t renewed but her newfound confidence led to her securing what would become a breakout role as the gender-swapping Brandon Teena in Boys Don’t Cry and her first Oscar. Another followed in 2004 when she played waitress turned boxer Maggie in Clint Eastwood’s Million Dollar Baby. Swank was just 30 years of age. “When I was a teenage actor, I’d see those people who won Oscars on TV and think, wow, that will change their lives, but that isn’t the reality. Although I do get offered more projects and have more opportunities as an actor, for which I am grateful, my life is more or less the same. I go home at night, like everybody else and I have the same ups and downs, the same challenges and the same obstacles I had before. People also have this impression that because of success, I don’t have to work as hard anymore, which is just crazy. There is so much more I want to learn, and working with great actors and directors gives me that opportunity”.

With a film like The Reaping, a flashy, spooky horror movie from Joel Silver’s franchise, Swank is certainly looking for new horizons. I ask her if she found if difficult to adapt to a very different kind of filmmaking, one that relies on special effects and computer generated imagery to support the storytelling. “Well, I didn’t have a lot of experience with special effects and really nothing like this, so I was relieved when I got on set and found that Steven had a lot of practical elements there for us to work off of. We didn’t use all that much blue-screen, add-it-later stuff. We shot everything on location in in and on the day there would be a way to make the effect more real for us as actors. Like in the scene with the locusts, where you see hundreds of thousands of these locusts invading the house, we had maybe two thousand there on the day. They were big suckers too, with a lot of legs. If it’s true that acting has a lot to do with re-acting, you know, that was not a problem. In that scene, when I get covered in locusts and get up and start thrashing about, there weren’t any insects on me, and I’ve never personally been covered in bugs, so I had to imagine it”. She throws her arms up in the air, thrashes her head around and lets out a mock scream. “I call it ‘sandbox acting’ because it’s like a child using its imagination at play time. It’s obviously ridiculous and if you were standing around watching, you’d think I had lost my mind, but you have to commit to it and just do it”.

Swank spent a couple of months at the end of last year in filming with Richard La Gravense on the adaptation of Celia Ahearn’s blockbuster novel PS I Love You. Swank claps her hands together and smiles a very big smile when I ask her about her experiences on the movie, which is set for release in the autumn. “Oh, I loved every minute of it, she sighs . “I was drawn to it in the first place because it is a beautiful, sweet romantic comedy and, like The Reaping, that’s different to any movie I had done before. But it gave me the chance to work with a great cast, like Gerry Butler, who is just gorgeous, Kathy Bates who plays my mom and Lisa Kurdow is my best friend. Isn’t that great? It’s one of those movies, the kind of movies I love, where you just laugh through the tears, you know?” I nod encouragingly but maybe a little unconvincingly. “Well, you probably don’t know, but it reminded me of what is really important in life, to hold onto the people you hold dear and not take them for granted, because you just never know what’s going to happen tomorrow”.
Posted by John Maguire

I never really understood Swank. On one hand, she's an absolutely incredible actress capable of Oscar-caliber stuff whenever she chooses, but she's also more than capable of "slumming it" and starring in all manner of poorly-conceived dross. The contrast between her best and her worst is so vast it's amazing.