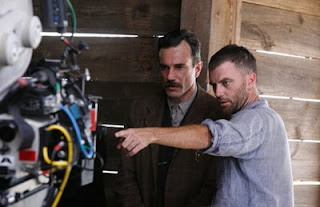 2008 was a mixed year for cinema and Irish films in particular. My list of best and worst is, once again, in alphabetical order.

If I had to pick one film above all the rest, I wouldn’t be able to. My favourite films this year were The Coen Brother’s No Country For Old Men and PT Anderson’s There Will Be Blood. Having seen within a couple of days of one other at the start of the year, I still cannot separate them.

Charlie Wilson’s War (Mike Nichols)
Claimed as a true story, if only half of Charlie Wilson’s stood up to scrutiny, it would still be an astonishing yarn. Terse, tart and timely.

Cloverfield (Matt Reeves)
A fragmented monster movie that was dumb and fun.

The Dark Knight (Christopher Nolan)
Director Nolan followed his reinvention of the Batman character with this even darker and more dangerous sequel, both beautiful and grotesque, which joins the tropes of the superhero movie to the inky noir of the vigilante film.

The Diving Bell & The Butterfly (Julian Schnabel)
Based on the memoir by Jean-Dominique Bauby, Julian Schnabel’s inventive and emotionally devastating film brings us inside the mind of the author, paralysed by a stroke, who can only communicate with the world by blinking his left eye.

4 Months, 3 Weeks & 2 Days (Cristian Mungiu)
A damning indictment of life inside Ceucescu's Romania, framed in a story about an illegal abortion. Devastating.

Happy-Go-Lucky (Mike Leigh)
A great central performance from Sally Hawkins makes Leigh’s bittersweet story about a young teacher learning how to drive into something uniquely heart-warming.

Hunger (Steve McQueen)
Turner Prize winning artist McQueen announced himself as a fully-formed filmmaking talent with this brave and unflinching visual poem about the death of Bobby Sands in Long Kesh in 1981. Michael Fassbender’s deterioration as a man making the ultimate sacrifice is hard to watch but the film offers rich reward for those who can bear it.

In Bruges (Martin McDonagh)
Another crime caper, and another debut feature, playwright McDonagh lets chalk-and-cheese killers Brendan Gleeson and Colin Farrell loose in the Belgian town of Bruges, throws entertaining obstacles in their way and sits back to revel in the mayhem.

Lars & The Real Girl (Craig Gillespie)
Ryan Gosling is in fine form as the emotionally stunted young man who buys a life-like sex-doll on the internet and treats her like a real person.

Persepolis (Marjane Satrapi & Vincent Paronnaud)
Visually hewn from Satrapi’s glorious graphic novel, this is a clever, emotionally honest animated biography that I preferred to the similar, but less artful, Waltz With Bashir.

Man On Wire (James Marsh)
James Marsh’s breathtaking docu-drama about Philippe Petit, a high-wire walker who dared to cross the Twin Towers in 1974, is both a keen character study and a compelling examination of obsession.

No Country For Old Men (The Coen Brothers)
The Coen’s stripped Cormac McCarthy’s already taut novel down to its bare bones for this exemplary modern Western. No Country is another examination of greed but one that owes more to fate than strategy.

Of Time & The City (Terrence Davies)
A beautifully assembled film about loss and regret that has the under-employed director wander through the Liverpool of his youth. Guy Maddin’s surreal, but funnier, My Winnipeg runs it a close second for most elegiac.

Son Of Rambow (Nick Goldsmith)
Genuine, clever and suffused with a delight in cinema.

There Will Be Blood (Paul Thomas Anderson)
Daniel Day Lewis won the Best Actor Oscar for his indelible performance as the oil-mad baron Daniel Plainview, but PT Anderson’s film about greed and God is more than just a one-man show; it is an excoriating condemnation of capitalism wrapped in the sweep of a beautifully photographed and edited epic.

Wall-E (Andrew Stanton)
Pixar’s latest cartoon epic, about a cleaning robot left alone on a rubbish-filled earth, is at once a hilarious semi-silent children’s film, a cautionary ecological story and a beautiful marriage of technology and ideas

Roger Ebert took flak this year for slating a film called Tru Loved that he admitted to only watching about eight minutes of. I can sympathise. He went back, watched the movie through to the finish, and hated it all the more. Read it here.

Before you might watch any of the movies below, consider Victor Hugo:
"Short as life is, we must make it still shorter by the careless waste of time."


Alarm (Gerard Stembridge)
Stembridge attempt to expose the shallowness of Celtic Tiger Ireland by making a shallow, empty-headed movie was further undermined by a bizarre script and flaccid performances.

Anton (Graham Cantwell)
Cantwell’s independent Irish feature gets full marks for spirit but the result was a mess of soap-opera scripting and hopelessly amateur acting.

Botched (Kit Ryan)
The title says it all really; this was a shambolic, dispiritingly derivative horror comedy that lacked a single moment of genuine cinematic wit.

Cassandra’s Dream (Woody Allen)
Poor old Woody. They say his new one Vicky Cristina Barcelona is a return to form, but they’ve been saying that since Everyone Says I Love You and that was released in 1996.

College Road Trip (Roger Kumble)
Martin Lawrence makes his by now traditional appearance on this list, with a crushingly cheap and derivative ‘family comedy’ in which the entire human cast was outplayed by a pig.

The Cottage (Paul Andrew Williams)
Director Williams painstakingly wasted the promise shown in his debut London To Brighton with this immediately forgettable horror comedy that grew increasingly desperate with each passing decapitation.

Doomsday (Neil Marshall)
An outright disaster from start to finish, Marshall pisses all over the potential he showed in The Descent. The most annoying film of the year.

Eagle Eye (DJ Caruso)
Indistinguishable from a video game and nowhere near as coherent.

88 Minutes (Jon Avnet)
Al Pacino had a year to forget, with this horribly dated serial killer movie matched in its inanity only by his dull crime caper Righteous Kill. Hoo-ha!

Fool’s Gold (Andy Tennant)
Matthew McConaughey can fuck off for himself.

The Happening (M Night Shyamalan)
Shyamalan’s descent into obscurity gathered terminal velocity with this shrill and vacuous eco-thriller about spooky plants killing off humanity with an airborne virus. Star Mark Wahlberg – who shared a dialogue scene with a pot plant - followed this with Max Payne, just edging out Pacino for 2008’s worst male lead.

Love In the Time Of Cholera (Mike Newell)
Magic realism without the magic.

Rambo (Sylvester Stallone)
A red soup of eye-watering violence and incomprehensible mumbling from Stallone, who should leave it at that, now, thanks.

Three And Out (Jonathan Gershfield)
A crass story about a loser (Mackenzie Crook) eventually finding the courage to write a novel by saving an old drunk (Colm Meaney) from suicide. Fails utterly to carry the conceit or cadge a decent joke.

Mamma Mia! (Phyllida Lloyd)
It might have proved popular at the box office and sold billions of DVDs but this hideously up-tempo musical taken from a playlist of Abba songs was the cinematic equivalent of a root canal. If you want a vision of the future, imagine a sparkly platform boot stamping on a human face, forever.

PS I Love You (Richard Gravenese)
Whatever the merits of Cecelia Ahearn’s source novel, Richard Gravenese’s film was an ordeal by candy-floss, a sickeningly twee and unnervingly creepy rom-com that was neither romantic nor comic in any way, shape or form.

You Don’t Mess With The Zohan (Denis Dugan)
Adam Sandler. How much is too much? Any at all.


The best movie books I read this year were American Prince: A Memoir by Tony Curtis, Scorsese by Ebert by Roger Ebert and Martin Scorsese and Making Movies by Sidney Lumet, originally published in 1995.

Incidentally, the worst movie book I read was Geoffrey Macnab's Making of Taxi Driver, which showed little insight into the film or the filmmakers and was riddled with errors and spelling mistakes.

My song of the year was Talking Head’s 'This Must Be The Place (Naïve Melody)' which sent a shiver down my spine when it was used, with devastating accuracy, in Lars & The Real Girl.
I love the song but loved the shot of the needle hitting the record almost as much. Outside the picture house, 'Got To Go' from Reflections On Creation And Bass was on heavy iPod rotation.

That Talking Heads song is one of my favourites of all time, I remember loving it in the film too. Although I've always called it "This Must Be The Place".

Quite right and corrected in the post, Annie. Thanks. I was being lazy.

John, an agreeable and comprehensive list - I have compiled my own movie review of 2008, on my blog The Dossing Times.

"If you want a vision of the future, imagine a sparkly platform boot stamping on a human face, forever."

The Award for best 7 word review for Fools gold..

Didn't manage to squeeze that one in on the breakfast show no?

Cant believe The Kite Runner did not make it into your list (I know it was Dec 2007 but I checked that list too and there was no sign of it). I thought it was a unique story, brilliantly acted. It is in my top 10 of the last 5 years. You really dont think it deserves a place in the top 10? Surprised to say the least

Short answer, I've never seen The Kite Runner. It's not possible to watch everything. On your recommendation, I'll take a look at it.

Any luck with the Kite Runner John? Your missing out. Excellent Blog by the way.