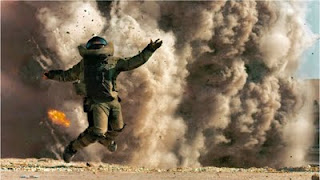 Kathryn Bigelow’s The Hurt Locker, from a script by former embedded journalist Mark Boal, is the best American film yet about the war in Iraq. Arriving after a long series of similarly-themed war films like Jarhead, Lions For Lambs and In The Valley of Elah, none of which found any traction with audiences, The Hurt Locker is as explosive and visceral as it’s subject matter; the moment-to-moment experiences of a bomb-disposal squad on the streets of Baghdad.

The film gets right down to the business at hand, foregoing time-expensive political context for an immediate adrenaline thrill as soldiers J.T. Sanborn (Anthony Mackie) and Owen Eldridge (Brian Geraghty) watch helpless as an Improvised Explosive Device (IED) goes off in the face of their sergeant (a cameo-making Guy Pearce). Enter Sgt William James (Jeremy Renner) as the new leader of the unit, a cocky, reckless young soldier who is nevertheless, fearless and clinically effective.

Although she hasn’t made a film since the costly failure of submarine adventure K19: The Widowmaker in 2002, Bigelow hasn’t lost her touch with action and spectacle. The Hurt Locker is incredibly tense, a cinematic emotion that is far easier to introduce than it is to sustain. Bigelow’s visual economy and eye for telling detail distils the essence of the ordinary soldier’s experience of modern urban warfare into a series of powerful, nerve-shredding set pieces. The IED is the perfect cinematic device for this war drama, being the signature weapon of the Iraq conflict and the soldier’s greatest threat. Bigelow arranges her soldier’s encounters with these bombs as concentrated, intimate dramas, watched over by Iraqi bystanders who stand on balconies or watch through binoculars as the theatre of life and death plays out beneath them.

The mostly unknown cast are a revelation, in particular Jeremy Renner as the witty, fearless James. The film opens with a quote from Chris Hedges, a former war correspondent for The New York Times, who declares that “war is a drug” and it is easy to see James is a strung-out war addict, a danger junkie whose thirst for adrenaline must be satisfied, regardless of whose life he puts in peril. Later, however, a cameo appearance from Ralph Fiennes (who starred in Bigelow’s underappreciated Strange Days) seems oddly out of place among the carefully-maintained verisimilitude, as if to say, what’s Voldemort doing in the Iraqi desert?

The Hurt Locker is a triumph for Bigelow. It’s one of the great war films, impressively photographed by Barry Ackroyd’s ultra-realistic handheld camera, brilliantly edited, lucidly positioned and overwhelmingly exhilarating to watch.
Posted by John Maguire

thanks to thsi review i now have large interest in seeing this film, i saw the trailer first when i watched inglourious basterds and i left that film thinking it was the only "war conflict" film for me this year, maybe the hurt locker will give tarantino a run for his money, what are your opinions on inglourious basterds? and overall 2009 cinema..?

After reading reviews about the hurt locker and distrcit 9, I was looking forward to seeing both - District 9 was incredible however the hurt locker certainly did not live up to my expectations, its not bad but its not great either and certainly is not one of the greatest war films. When people start climbing into showers with their clothes on and thumbing walls it just gets a little cliched also I didnt feel any sense of drama - also while I like your reviews I think giving away plot lines such as the death of guy pierce at the start serves to take away from the film