Nominative determinism is a theory in psychology that supposes a person’s name has some influence over what they do with their life. Mr Field might grow up to become a horticulturalist, for example and Mr Payne a glazier, or a dentist. So it was predestined that Marc Webb, in only his second feature, would direct The Amazing Spider-Man, Marvel Comics’ hasty re-imagining of their superhero franchise. Even that mild coincidence won’t be enough to distract attentive cinemagoers from the fact that they’ve already seen this film, exactly a decade ago, when Sam Raimi and Tobey Maguire’s film (the first in a dwindling trilogy that finally exhausted itself in 2007) kick-started the current renaissance in comic-book blockbusters.

Since Raimi’s Spider-Man, almost every spandex-clad superhero has had a cinema outing: Batman, Superman, Iron Man, even second-tier champions such as The Green Lantern and Captain America. Just last month, Marvel Comics crammed as many of their characters as could possibly fit into one film, and made another billion at the international box-office. So, perhaps understandably, the industry giant thinks the time is right to reinvent Spider-Man for a new generation; anyone under the age of ten and hopeless amnesiacs. Myths and legends are designed to be told and retold, I suppose, but in a market saturated with superhero origin stories, blockbuster sequels and special-effects derived fireworks-displays, The Amazing Spider-Man really needs to live up to it’s over-confident billing.

Maguire has been replaced by the taller, leaner Andrew Garfield – the likeable British actor best known for his supporting role in The Social Network – but apart from a few tweaks, the story is stultifyingly familiar. This time it opens with young Peter Parker being separated from his parents, Richard and Mary (Campbell Scott and Embeth Davidtz) who leave him in the care of their relatives Uncle Ben and Aunt May (Martin Sheen and Sally Field, a great pairing) when Richard’s scientific research causes the family to be threatened by sinister forces. Growing up safe in suburban anonymity, Garfield’s lanky, awkward and now orphaned Peter is skateboarding around his school while tinkering with electronics and throwing forlorn glances at his crush, Gwen Stacy (Emma Stone).

You already know the rest: Peter visits a laboratory and is bitten by a radioactive spider. Suddenly, he’s no longer a geeky beanpole, but a faster, stronger, stickier teenager; a development neatly captured in a scene on a subway where his abilities surprise himself as much as a potential mugger. Having acquired his red spandex suit, and started his campaign against evildoers, the story brings him into the orbit of one-armed geneticist Dr. Connors (Rhys Ifans), whose sense of right and wrong has been clouded by his obsessive scientific experimentation.

Where once superhero movies aspired to little more than recreating the experience of reading the comic-book; a series of set-pieces arranged as flat, highly-detailed tableaux, the genre has matured over time to incorporate credible, well-acted drama that adds credibility to their character’s emotional lives. Webb’s previous film 500 Days of Summer was a lightweight indie rom-com but it had heart and soul, something he carries with him to the superhero franchise, successfully combining shaded, complex characters with grandstanding spectacle, something Raimi’s brightly-coloured rollercoaster struggled to achieve. There are exhilarating moments of airborne acrobatics to enjoy as the whooping hero swoops through the Manhattan skyscrapers at the end of a silvery thread, but the 3D effect is too sparingly-used to justify the extra couple of euro on the ticket price.

In re-building Parker into an introspective, uncertain teenager more typical of his debut, Webb has cast well in Garfield, who might be ten years too old to be a high-school student but brings an air of genial befuddlement that helps to smooth out the bumps in the fantastical, sometimes illogical storyline. Opposite him, Stone’s Gwen is far more than elbow-gracing eye-candy, but a complicated, smart and high-achieving heroine with parental issues of her own to work out. Together, they make for a charming, charismatic screen couple. As Peter Parker struggles to adapt to a changed existence, he must endure meaty dramatic crises, abandonment, grief and sacrifice, given a commendably credible treatment by an in-form ensemble. However, as the plot scurries along, Webb introduces elements of a glossy corporate conspiracy thriller which he then more or less forgets about; leaving the strands of that sub-plot dangling amongst a frayed web of narrative dead-ends.
Posted by John Maguire No comments: 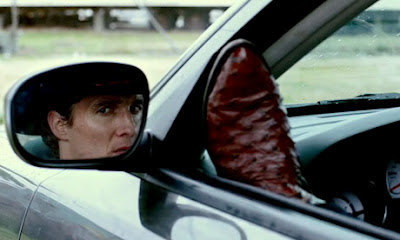 Forty years ago, William Friedkin was at the vanguard of a new wave of young filmmakers that revitalised Hollywood; the hotshot director who followed The French Connection with the blockbuster horror The Exorcist. Having tried his hand at just about every genre of film, after 1985s cop conspiracy To Live and Die in LA, Friedkin was a spent creative force. His career went off a cliff in slow-motion, with the Oscar-winner reduced to making low-rent television movies and pilots for series that didn’t make it to air. When he did make films, they were ridiculed (1995s erotic thriller Jade) or poorly distributed (2003s action movie The Hunted).

They say there are no second acts in American lives, but at 76, Friedkin is enjoying a late-career run of something approaching his old form. Reunited with the playwright Tracy Letts, who wrote his last film, the needless to say little-seen 2006 psychological thriller Bug, Killer Joe is a deep-fried Southern redneck noir that feels like the work of a director half his age. A bleakly comic story of murder, duplicity and sexual exploitation, Friedkin’s film fizzes with scuzzy, fidgety energy until a fatally overcooked finale undermines everything that has gone before.

Skipping though the potholed puddles in a torrential downpour, ragged drug-dealer Chris (Emile Hirsch) turns up unannounced at mobile home where his dim-bulb father Ansel (Thomas Haden Church) lives with his slatternly stepmother Sharla (Gina Gershon) and his virginal teenage sister Dottie (Juno Temple). Repeated cutaways to a vicious pit-bull snarling and pulling on its chain remind us that this is a dog-eat-dog world, and someone is going to get devoured. Chris is desperate for money to settle a debt with a local drug lord, who is threatening to kill him, and so proposes a Double Indemnity plan in which they kill his unseen mother, Ansel’s first wife, collect her $50,000 insurance payout and split it among themselves.

Reluctant to do any killing themselves, Chris tells his father about a police detective who has a lucrative sideline as a contract killer. Killer Joe (Matthew McConaughey), is an ice-cold, Stetson-wearing assassin who is totally bad and quite possibly mad. With everyone agreed on the course of action, and already counting their share of the loot, the plan hits a snag when Chris is unable to come up with the hefty deposit for Joe’s unique services. Looking around the trailer and not seeing much in the way of collateral, Joe’s cold eye falls on the innocent Dottie, a child-woman who speaks in drawled nursery rhymes and sleeps surrounded by teddy bears. The deal is quickly sealed, but can Joe get the job done before the family tears itself apart?

Letts, who won a Pulitzer for his latest play, August: Osage County, has an aficionado’s understanding of disreputable genre cinema and a finely-tuned ear for how people talk to one another. Both Bug and Killer Joe are adapted from stage plays and although Friedkin does his best to open out the story, trailing his characters along endless strip-malls and through neon-lit strip-clubs, something of the story’s three-walled, stage-bound sensibility lingers. He has cast the story well, finding actors who can convincingly transform themselves into trailer-trash caricatures and giving McConaughey his best role in a decade.

But if you make a film about essentially nasty people, you risk making a nasty film. Friedkin, by turns amused and revolted by his characters sleazy shenanigans, is uncompromising in depicting the violence, abuse and degradation they endure. Where he errs is in making that violence the film’s sole reason for being. In its closing stages, Killer Joe becomes an unapologetic wallow in the mire, with a final scene so repugnant that the black comedy stops being comic and the film is just black, full stop.
Posted by John Maguire 2 comments:
Newer Posts Older Posts Home
Subscribe to: Posts (Atom)