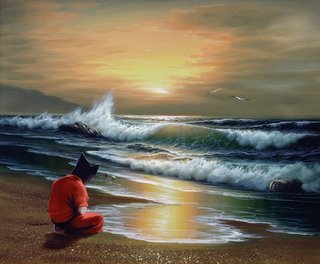 “Are we ever going to get to kill anyone?” asks a soldier at the start of British director Sam Mendes' new film. No, they’re not, and it’s the lack of events or purpose that makes Jarhead a different kind of antiwar film - a war film without a war. In it Tony Swofford, played well enough by Jake Gyllenhaal, enlists as Marine, the title comes from the corps nickname, and after training is seconded into an elite division of snipers. Paired up with a spotter, played by Peter Sarsgaard, the 20 year old Swofford is sent to Kuwait in 1991 as part of Desert Storm. But the soldiers don't get to do much of anything when they get there, other than conduct patrols through the desert and perform drills and demonstrate their fancy equipment to uninterested journalists, with the gradual disconnect from home, from government and from the business end of the war itself driving them close to a kind of madness. Their cold-eyed tormentor in the desert is Staff Sergeant Sykes, played by a macho Jamie Foxx, who maintains a rigorous sense of discipline combined with a juicy sadistic streak. Once the actual conflict begins, the troop spends their time mopping up the burning oil fields or on patrol along the burnt-out cars on the infamous “Highway of Death”. Crucially, they never get to kill anyone; an impotence and lack of purpose that builds slowly into frustration and anger.

Mendes is certainly building towards saying something; that war isn’t just stupid, it’s dumb. That modern warriors are likewise, a dumb lot of undereducated teenagers fooling around with dangerous technology, just like their real heroes on the PlayStation. But Mendes never fully captures that cocktail of adrenaline, testosterone, cordite and disappointment in anything other than a baldly literal sense. In bleaching his story of colour, glamour, jingoism and irreverence as thoroughly as his photographer Roger Deakins washes out his widescreen desert images, Mendes throws the juice out with the bones. Unfortunately for moviegoers, random events and haphazard situations that lead nowhere doesn’t make for much of a movie, and despite a good handful of these scattered moments being both funny and horrifying and pretty faithful to Swofford’s memoir, they don’t add up to anything like a film. For all his awkward name-dropping and ironic posturing, Mendes achieves nothing like a coherent tone or a meaning - not that I’m looking for an explanation for the war or a discussion about American militarism or for the director to propose a reason why men go to war, but a meaning for the film itself. Jarhead doesn’t mean anything. Swofford is pointedly reading The Stranger, with Mendes attempting to capture the same tone as Camus’ narrator, who knows what has happened, but not why or what it means or why it has happened to him. Maybe it’s supposed to be like an absurdist Beckett play; Waiting for Saddam, perhaps. If it is, then Mendes has spent his down-time watching a whole lot of other, better war movies. In sifting through the dust of a genre that has already been well served, Mendes, unsurprisingly, finds nothing at all new or all that compelling to say. When there is a nation that has lost everything, including its freedom, at the heart of your story what sympathy can there be for a boy soldier who is bored and going through a bit of an identity crisis? Swofford and his fellow Marines complain bitterly because the methods of modern warfare means their lives are never in danger and they get to go home safely. How disgusting a notion is that? Those of us old enough to have watched the news in the early 1990s already knew about the Highway of Death and the burning oil wells and the buried troops. It doesn’t add much to see them recreated in a desert in New Mexico. What does it add to either film to have us watch Gyllenhall and his whooping buddies watching the Ride of the Valkeries scene from Apocalypse Now? I get Mendes' point that anti-war films can be misconstrued; that which is supposed to repell us can excite us instead, but other than that? Not a whole lot.

Much like Stanley Kubrick's Full Metal Jacket it's the first half of the Jarhead (the arduous training segment) that says most about the process of preparing for war, with the second half descending into a chaotic, random, anti-linear stream of events. Mendes consciously and repeatedly recalls Kubrick’s film, similarly made on painstakingly recreated locations on the other side of the world and featuring a story split between the process of turning young men (conscripts in his case) into soldiers and sending them off to do the killing. Except Kubrick was talking about a different war in different times, and had a different opinion. He saw Vietnam as being an inevitable extension of political ideologies, but also as part of the innate split in the human personality; ‘the Jungian thing’, as he describes it in the unforgettable grave-side scene between Pt Joker and his commanding officer. But to take this down from the clouds for a moment, Kubrick also had a script, dialogue, events and personalities. He had a point to make. Kubrick’s grunts too were brainwashed, over-drilled fighting teenagers, engaged in a war the filmmaker opposed, but he never forgot that they were also characters in a movie and that there would eventually be a paying audience of people requiring entertainment and food for thought. Mendes, for all his artfulness with the camera and facility with the actors, forgets.

If the director and his screenwriter Broyles (a Vietnam veteran himself) felt the need to add their tuppence to the arguments for or against the decade of war and sanctions in Iraq, why use other filmmaker’s words and images in order to make their point? Swofford’s book was praised on publication as being a unique voice that related the truth as one soldier saw it, a blistering peek behind the curtain of official military propaganda and news journalism. Why wasn’t it good enough for Mendes, or is he incapable of anything other than ironic detachment? His take on the story is just a pretext for photography. To drive home the true obscenity of war the movie needed something like the stomach-churning sequence in the book in which a fellow Marine finds an Iraqi soldier’s corpse and systematically mutilates it for several days, until Swofford finally steals the body and buries it in the desert. There is nothing as strong or as clearly morally defined in Jarhead, and it’s to the film significant disadvantage that Mendes didn’t have the courage to include it. By ramming his influences down our throats, Mendes only highlights his own film’s lack of anything interesting or novel to say about the mistakes that US administrations repeat again and again perhaps or, if that’s beyond him, offer any real insight into those young Americans buying KitKats at Shannon Airport this morning.

Jarhead’s scenarios are supposed to recreate the bemused atmosphere of what it was like to be a gun-toting soldier readied for action in a war won in the air, a war they were never likely to take an active part in, a war that was over in a couple of weeks. The overwhelming sense of frustration his plot brings about might well be Mendes’ avowed intention, but it makes for a pretty tedious movie. He is a smart, energetic director, and willing to take on something new in each of his three films to date, but in the end Jarhead is just as coldly beautiful and unfeeling and inhuman as his duff gangster movie Road to Perdition. And if that’s the whole point, well, you can go tell it to the marines.

Awww... and I was looking forward to that!

Thanksy for the Banksy though. Very cool.