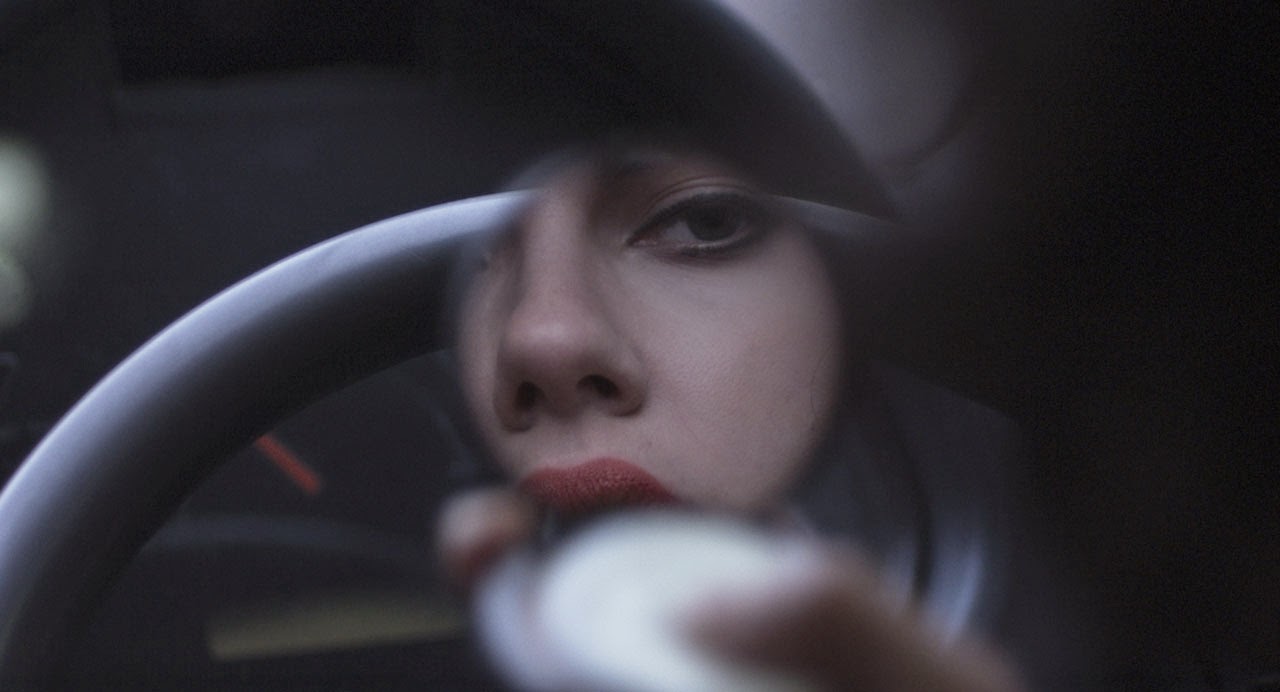 For his first film in almost a decade, British director Jonathan Glazer lands an extraterrestrial on the grimy streets of modern-day Glasgow and follows her as she completes an unexplained mission. Oblique and mystifying, beautiful and grotesque and filled with haunting images, Under the Skin is likely to repel as many as it entrances.

Sparsely adapted by Glazer and screenwriter Walter Campbell from Michel Faber’s cult novel, Under the Skin unfolds as a feverish dream. The first thing we see is a series of overlapping images; the crescent curves of a planetary system, a vast, white circular vessel slowly filling with an oily substance and the black pupil of a human eye without a spark of life. Then a dead woman’s body is thrown into the back of a truck on the side of a wet road. Another woman (Scarlett Johansson) strips the corpse naked and puts on her clothes, seemingly in the process adopting her persona. While doing this, she finds a solitary black ant and examines it closely as it wriggles on her fingertip. Without uttering a line of dialogue or providing any overt exposition, Glazer has established the scene: this ‘woman’, arrived from somewhere else, will study us in the same way she studies the insect. She is not the benign anthropomorphic alien of ET or Close Encounters, here to teach and heal. She looks like a person; she looks like Scarlett Johansson in fact, but is as separate and unknowable to us as we are to the ant.

Glazer’s camera takes us onto the streets of the Scottish capital, leads us between the people on the streets, watching as they tap out texts, smoke cigarettes and wander through the shops. The woman buys new clothes to match the city crowd, gently applying a smear of red lipstick and a smudge of eye-liner. As Johansson drives around the street-lit roads in a white van, looking for likely men to enrapture and ensnare, Glazer adopts the techniques of hidden-camera reality television to give us glimpses of how his alien slips unnoticed through the cracks. She stops the van to talk to men in a politely clipped English accent, always checking first that they are alone and unlikely to be missed. More often than not, they respond to her charming questioning and get into the van with her.

Soon after, in the film’s most visually striking sequences, Johansson leads the men into a black room with a shiny, slick floor and watches as they sink beneath the surface, to be absorbed by an oily black liquid and transformed into something unspoken. Is she collecting trophies, processing food or collating data? We cannot say for sure and the uncertainty is unnerving. Again and again Glazer shows us this process, extending the scene by moments and adding more details, until we make the connections for ourselves.

In the first act, Glazer’s methodical pace, deliberate repetition and disorienting tone is structured to reflect the alien’s utter inscrutability and the apparently simple terms of her mission. Things gradually start to change. She meets a potential victim, lures him into her van and only then notices his facial deformity. Uniquely, she allows him to escape. The next day she falls on her face in the street and is bewildered when passers-by try to help her. From that moment on, the story gathers emotions around it like an out-sized overcoat. She struggles to cope with new sensations of empathy, pity and fear. When her motorbike-riding handler, credited only as The Bad Man (and played by professional racer Jeremy McWilliams), discovers his charge has fled the city into the Scottish highlands, he gives chase. The predator becomes prey.

Told with minimal dialogue and with a vibrato mood of anxiety and tension, there are moments where the film contorts into pure horror, particularly in a sequence at a bleak, wind-torn beach where Johansson stands mutely on the shore. We watch as a woman drowns in the pounding surf, her frantic husband attempts a rescue and their toddler sits screaming on the sand. The alien walks away. It is the most stomach-clenching scene I have watched in a cinema in years; a moment of icy disregard that serves to remind the viewer that they are human, that they have feelings, that they couldn’t just stand by and watch other people suffer. Mico Levi’s throbbing electronic score ratchets up the dread, sounding at times like a whispered conversation between computers, or an almost-subsonic alien language.

As the film weaves between the gliding precision that Glazer exercised in Sexy Beast and Birth and more rough-and-ready CCTV images, Johansson remains the constant, effortlessly switching from sunny and gorgeous to an unsettling blankness, every wrinkle of posed humanity falling off her face in a heartbeat when no-one is looking. It’s a brave, engrossing performance of twisted eroticism that grounds an always intriguing, sometimes astonishing audio-visual experience. Glazer crafts a mesmerising, surreal spell: some audiences will fall for it and some will remain unmoved but Under the Skin remains lodged beneath mine.
Posted by John Maguire

I think the moment with that ant may have been the most disturbing part of the whole film for me.

...which is saying something.

I thoroughly enjoyed this movie. It was interesting to see a new side to Scarlett Johansson's acting prowess.