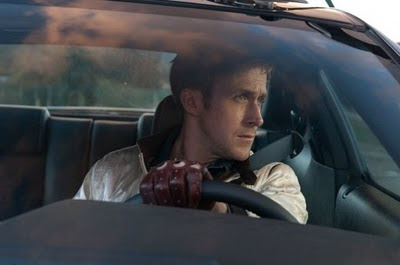 Ryan Gosling stars as the anonymous driver, a car mechanic and stunt-performer for the movies who moonlights as a getaway wheelman for criminals. He is a strictly professional accomplice, giving robbers exactly five minutes of his time to get as far away as possible from the scene of the crime, for a price. His skills are cleverly demonstrated in an opening scene that sets the tone for the rest of the film as The Driver (we have to call him something…) sits outside a jewellery warehouse in an everyday car, souped-up by his boss and friend Shannon (Bryan Cranston). After picking up the two thieves, he takes them on a careful jaunt around the back streets, sticking to the speed limit, stopping at red lights and otherwise remaining completely ordinary. Avoiding the squealing tyres and flaming pile-ups of the standardized Hollywood action movie, they smoothly glide to safety.

Naturally, the Driver lives alone. His neighbours in the apartment building are Irene (Carey Mulligan) and her son, Benicio (Kaden Leos). They meet one day at the garage where he works and, going against his own rules, he starts to develop feelings for her. Irene’s husband Standard (Oscar Isaac) is in prison and, when he gets out, The Driver breaks another of his rules and befriends him. Forced to pay off a massive debt by robbing a pawn shop, The Driver offers to help. Needless to say, it doesn’t go well.  Soon The Driver and Shannon are up to their necks in trouble with jittery psycho Bernie (an impeccable Albert Brooks) and Nino (Ron Perlman), who has the impermeable features of an Easter Island statue.

Drive is awash with echoes and allusions to classic Californian car movies, Peter Yates’ Bullit and Walter Hill’s The Driver in particular, yet they are reassembled into something hypnotically intense and achingly cool. At one point, Albert Brooks’ gangster says that he used to produce action pictures in the 80s that ‘the critics called European’, a knowing nod from Refn whose film could be described in the same manner. Although Drive is, in part, an exercise in reinventing genre clichés, Refn and his screenwriter Hossein Amini (adapting James Sallis’ novel) take unexpected swerves down little-used side streets.

Newton Thomas Sigel’s immaculate cinematography gives the film a glowing neon sheen, underlined by a throbbing synth soundtrack from Red Hot Chili Peppers drummer Cliff Martinez. The entire cast give strong performances, Gosling’s almost mute anti-hero in particular, but the real star of the film is Refn who proves he is a master of sustaining mood and tension; by turns violent and romantic, muted and melodramatic. But it doesn’t last. If the first half of Drive is involving and thrilling, the second half is a little less so. As The Driver abandons his strictly delineated rules, dramatic logic go with them, to be replaced by rapidly escalating violence. The carefully modulated mood fractures as Refn’s characters seem to wake from their dream-like torpor and savagely set about one another. The director doesn’t seem all that interested in exploring why these people are causing each other such pain, his attention distracted by the formal beauty in his jarringly graphic images; a fountain of blood, an exploding head, a switchblade applied to a vein.

The fact that Drive evaporates from the memory much more quickly that might be expected points towards Refn’s film being a triumph of style over substance, of execution over essence. But what extraordinary style, what flawless execution.
Posted by John Maguire