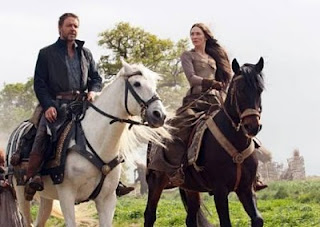 In Ridley Scott’s revisionist re-imagining of the iconic English hero Robin Hood, Russell Crowe doesn’t wear Lincoln green tights or a cap with a jaunty feather. He’s not all that interested in the redistribution of wealth or robbing the rich to feed the poor. He doesn’t have any men, merry or not, and his mortal enemy the Sheriff of Nottingham is mostly marked absent.

In their determination to reinvent a classic cinematic character, writers Brian Helgeland, Ethan Reiff and Cyrus Voris have carefully excised all those elements we’ve come to expect from the legendary medieval outlaw. When so much of cinema is made up of warmed-over clichés, it seems churlish to complain when a filmmaker tries something new, but the result is an action film that might have been called anything other than Robin Hood, and a central character that barely merits the name. It’s like Gladiator in Sherwood Forest, except there’s no mention of Sherwood Forest either.

As the film opens, Crowe’s Robin Longstride is making his way back to England after a decade serving as an archer in Richard The Lionheart’s Third Crusade. Richard (a dissolute Danny Huston) is laying one last siege on a French castle before his return to London, but is killed by a (historically accurate) arrow through the neck. With the army scattered, Longstride and his almost anonymous cohorts, Little John (Kevin Durand), Will Scarlet (Scott Grimes) and Alan A’Dale (Alan Doyle) come across the aftermath of an ambush led by the traitor Godfrey (Mark Strong). Robin takes it upon himself to deliver Richard’s crown to his mother Eleanor of Aquitaine (Eileen Atkins) in London, while also returning a prized sword to Sir Walter Loxley (Max Von Sydow), the last request of his dead son. When he arrives in Nottingham to deliver the sword, he meets his former comrade’s widow, Lady Marion (Cate Blanchett). Marian and Sir Walter listen to the crusader’s story and pretend he is their son and husband returned from war, rather than face losing the family estates to the new King John’s (Oscar Isaac) crippling taxation.

As Robin settles in to his new-found home, the arrogant King John is persuaded by Godfrey to tax the already struggling northern lords for more money to fund his war chest. His short-sighted fiscal policies include killing everyone who doesn’t pay up, a wave of chaos that eventually arrives in Nottingham. At the head of the charge is Robin’s newly-minted mortal enemy Godfrey, determined to eliminate Robin before he reveals his treachery against the dead King Richard. At the same time, Robin is honing his own political points of view, a kind of Dark Age Socialism built on the idea that all men are created equal, and so fires the northern lords into forcing King John into signing the Magna Carta.

Built on a foundation of hastily assembled historical moments, this busy plot must also contain Robin’s romance with the no-nonsense Marion, his recovery of a series of repressed childhood memories, his assembling of a team of freedom fighters, a couple of rousing speeches and the staging of umpteen fight scenes and battles. This Robin Hood is no Errol Flynn, but he is still handy with a bow and arrow, and Scott is equally adept at filming pulsating action sequences. The problem with the film is that it tries to be a gritty action adventure and a bucolic comedy romance at the same time. The action is stirring but mindful of the 12A certificate, almost entirely bloodless. The romance is rushed and stilted and scattered with odd moments of witless wordplay. The final couple of scenes, which act as a sort of establishing yarn for an intended sequel, are followed by a title card that tells us “And so the legend begins”. Well, what have we been watching then?
Posted by John Maguire

I was actually bored while watching this. The greatest sin an action film can commit if you ask me.

I think the only problem people had so that they criticized this work that much, is the fact, that they expected an exact copy of the robin hood story; a guy in the woods fighting against the rich to feed the poor.. But they found out at the end that it's not that.
So even if the film was good in terms of acting, cinematography.. people stick with the classic image of R.H, so for them, I wish that Scott would have written in the opening sequence; This is Robin hood part one, Robin Hood part two still to come.. well he did it but in the ending sequence.
people need something like the ending sequence of Pirates of the Caribbean to understand that there's a coming part of the movie, this way they won't be bored..