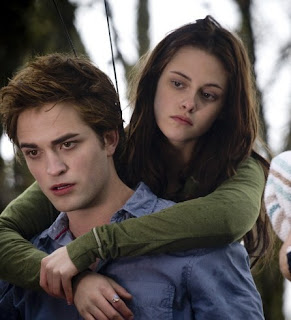 Not being a twelve year old girl, I was unaware that Twilight is the most important thing that has ever happened in the world, ever. But apparently it is. The first in a burgeoning franchise of anaemic vampire romances taken from a series of tween-lit books by Stephenie Meyer, Catherine Hardwicke’s faltering supernatural drama crested a tsunami of hype to break box-office records on its American release but the film itself fails to quicken the pulse, being a lumpy splicing of Judy Blume and Buffy The Vampire Slayer.

Twilight introduces us to teenage loner Bella Swan (Kristen Stewart) as she moves to the small north eastern town of Forks to live with her policeman father (Billy Burke). On her first day in her new high-school, she finds herself unaccountably drawn to the local heartthrob Edward Cullen (Robert Pattinson), a moody student who is only ever seen with his similarly glum and pasty adopted siblings. Soon, the two have begun a chaste love affair, she finding his brooding mystery irresistible while he proclaims her to be the most interesting girl he has ever met. But Edward has a secret; he’s a 100 year old vampire, part of a clan of ancient fiends that have haunted the town for generations.

These vampires are not bothered by daylight, although they tend to avoid it because it makes their skin iridescent. They don’t bare their fangs or bite jugulars or sleep in coffins. They won’t harm humans, only hunting animals for their blood. The only thing that distinguishes them from the rest of the crowd is a faint amber tint in their eyes and a tendency to wear too much make up. By making them ordinary, let alone vegan, Twilight makes them boring.

Both leads are suitably pretty, Pattinson just edging it, but Hardwicke’s effort to connect them as a pair of star-crossed lovers is unsuccessful. The angelic Edward might sparkle in the sunlight, but the film doesn’t. A well-positioned opening act soon flat-lines into endless scenes of semi-conscious moping, the tone dampened further by a series of goggle-eyed staring matches and reams of brainless dialogue. Stewart affects a torturous verbal tic that has her sigh meaningfully after each stumbling sentence, in contrast with her artificially chirpy high-school friends. They are so full of bouncy, sugary enthusiasm it’s not difficult to see why Bella prefers the company of the undead.

The middle section of the film is essentially an interminable fumble around the uncomplicated themes of teenage chastity and social exclusion. Like Footloose, but with less bite. Then, from nowhere, the gang meet a new set of nasty vampires, setting off a shuffling third-act chase, a juddering confrontation in a mirror-lined ballet studio and a ponderous, pointless reunion at the Prom.

In the days following the screening I attended, the news broke that Hardwicke would not be asked back to direct the sequel New Moon, already in pre-production. This can only be good news for the property; her film is laboriously constructed, unevenly performed, crammed with glaring continuity errors (a plaster cast switches legs mid-scene, for instance) and clumsy special effects. Grown-ups who have come to terms with the whole sex thing will find much more interesting meat in the superficially similar Swedish drama Let The Right One In when it opens here in the Spring.
Posted by John Maguire